IDTechEx staged its annual conference on Active RFID and Real Time Locating Systems RTLS in Dallas USA 5-6 December. Delegates at over 240 and exhibitors at 20 were again sharply up, reflecting this prosperous and innovative industry. Here we look at aspects relevant to printed electronics. Passive RFID is most amenable to being totally printed because, in most cases, the logic consists of just a memory chip. However, although printing the microprocessors commonly used in active RFID is probably ten years off, the opportunity to print the antennas, sensors, interconnects and batteries is much closer. The primary motivation is to make these devices thinner, flexible and lower in cost.

There was no consensus among users as to the mix of active and passive solutions they would use. This was inevitable because of the disparity of needs. Sybren Tuinstra of logistics company TNT (world number four) said he was headed for almost entirely passive RFID solutions. Dr In K Mun of Hospital Corporation of America is headed towards largely active RFID solutions. Dr Wayne Wang of Ford is on a journey to both active and passive solutions. Certainly many speakers opined that the UHF passive RFID industry had severely damaged itself by over promising - something less common in active RFID.

The event clarified some trends as follows. Regular active RFID, that is neither a sensor network nor RTLS, is increasingly moving from the matchbox format to the thick card format. By this we mean something only four millimeters or less in thickness and with the footprint of a credit card or a little less- on its way to being truly laminar and even printed. Indeed, some of these new devices already have printed sensors. This flat format is not driven by the card industry but rather by the usefulness of this shape in such things as Identec Systems (Germany and USA) vehicle number plates eg for orchestrating taxi deployment in cities, swing tags and badges from Syris of Taiwan for secure access and other purposes, asset tags from Axcess of the USA and even RFTRAQ of the UK tagging paper roll cores for newspaper factories, where the flat tag is embedded in the core.

No change in batteries - yet

Today, from our active RFID car clicker to our wristwatch we experience electronics powered by coin (button) batteries. Most active RFID is like that. At this conference, Cymbet and Thin Battery Technologies of the USA and Enfucell of Finland exhibited the next generation thin film batteries including manganese dioxide zinc and various lithium chemistries and Infinite Power Solutions of the USA spoke on their lithium version. The manganese dioxide zinc batteries are all flat bed or rotaryscreen printed and the lithium batteries are deposted and patterned using semiconductor techniques. The leading edge laminar battery companies have yet to land large orders for RFID implementations but that will come. Small to medium orders for these batteries in time temperature recording labels and other formats are increasingly common.

Axcess demonstrated card shaped tags that act as passive UHF, active LF and other forms of RFID. Syris and others had similar products, for instance combining passive HF with 2.45 GHz active. Whether these are solutions looking for problems or the basis for imminent large orders remains to be seen.

Ubiquitous Sensor Networks, USN are not yet with us.They will be based on huge numbers of printed sensors in printed miniature tags that the Korean National Information Society Agency, speaking at the conference, called Tiny Interface with the Physical World TIP. They have the broadest and most ambitious USN program, backed by substantial government and industrial funding. Deployment of very large numbers of RFID tags, that have sensing capability and are in self healing wireless mesh networks, calls for improvements in every aspect of the software, tags and infrastructure. However, this heroic quest has begun, with many trials and research programs under way including at the new Holst Research Centre in the Netherlands, which presented. At this event, we saw many precursors of the low cost sensor tag. The new work of TelepathX of Australia was shared from the poduim. This is hugely significant in the way it sharply reduces power needs for widely deployed sensors - potentially in huge numbers. Applications being trialled across the world include real time alerting and detailed mapping of forest fires and causes and location of electricity outages in real time across vast areas of land.

RFID with sensing is now commonplace

Many companies now offer sensing, even including sensing in some RTLS. For example, RFTRAQ of the UK talked of its basic mesh networking using IP addressed, remotely configurable tags, with movement and temperature sensing capability as standard. Most of the other exhibitors demonstrated fairly small tags at moderate prices that could sense. Rather bigger, the palm sized tag of SAVR Communications of the USA had even greater functionality including recording temperature, light, pressure, humidity and tampering and human interfaces such as buzzer and light. Others described large RFID tags with shock sensors and real time tamper detection. The sub category of time temperature recording labels is moving slowly towards being a worthwhile market, price being one major impediment. The US Army said TTR labels are next on its list of purchasing priorities and many companies said they are about to announce lower cost versions of such Smart Active Labels SAL so perhaps that will get things moving. Mid Sweden University spoke on action activated RFID and other sensor systems that can be partly printed. 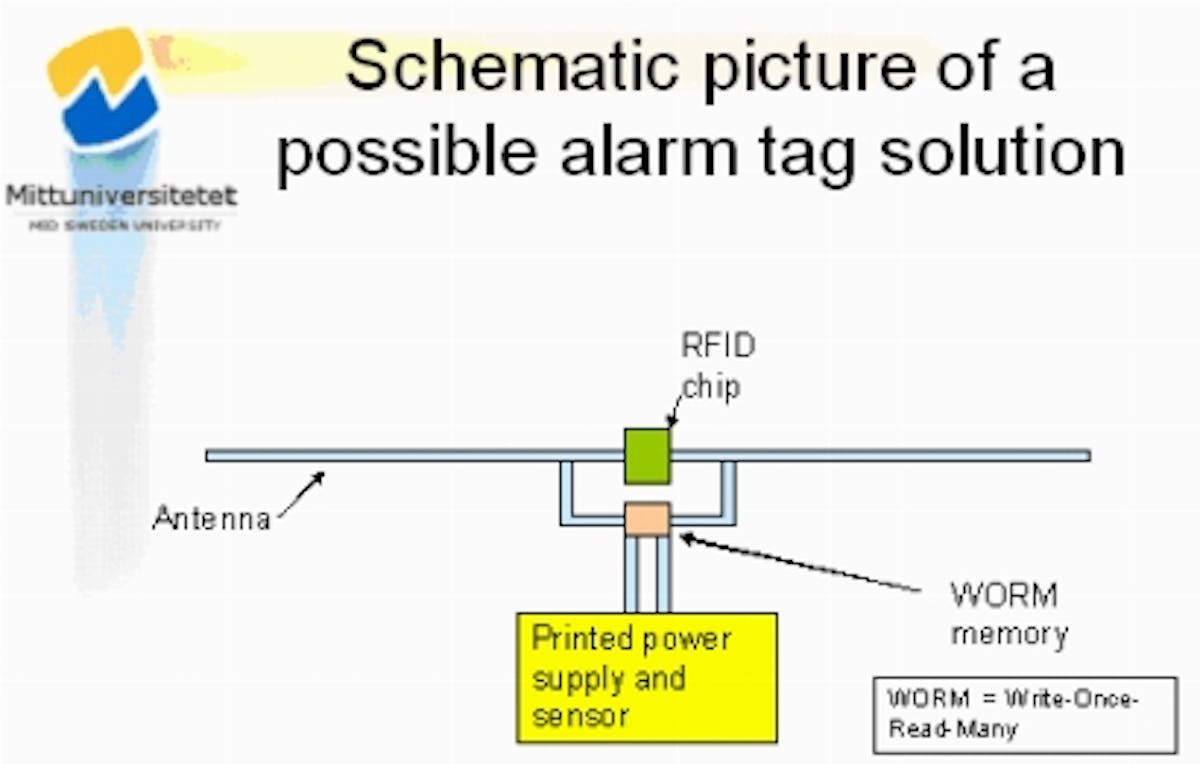 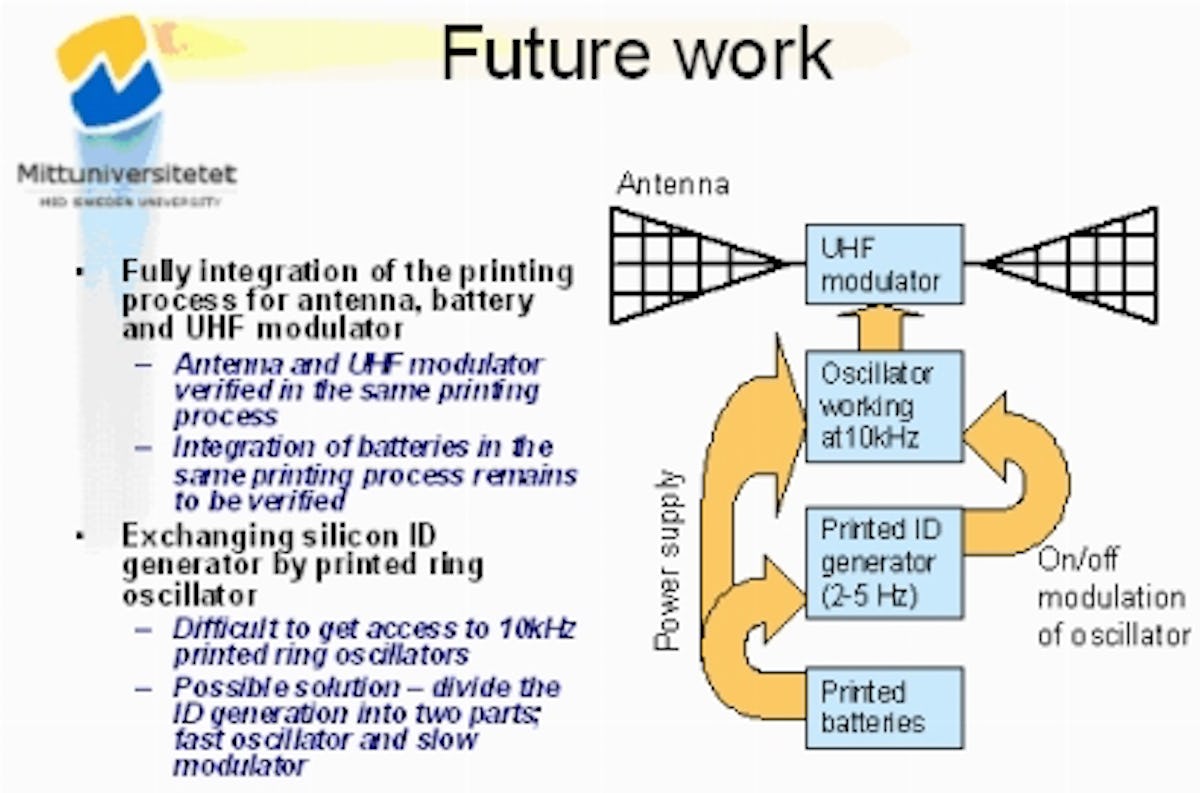 Source: Mid Sweden University
The conclusions were:
Information Mediary of Canada described its partly printed, sub $3 laminar time temperature recorders and its patient compliance monitoring blisterpacks with printed sensors.
The $5 billion RFID market is shared by about 1000 suppliers. In active RFID, within the 200 or so participants, there are many medium sized companies that now need to progress to the big time. These currently have sales of a few million to a few tens of millions of dollars and they typically employ 40-100 people. Many of them shared their plans by exhibiting and speaking at the conference. It will be interesting to see who dashes ahead in the next few years. The product offerings are certainly changing rapidly.
Source top image: Information Mediary
For more attend RFID Smart Labels USA 2008.