Berkeley Lab, USA create the smallest radio ever made

The first fully functional radio from a single carbon nanotube has been created by a team of researchers with the US Department of Energy's Lawrence Berkeley National Laboratory (Berkeley Lab) making it the smallest radio ever made.
The team found that a single carbon nanotube molecule has all the essential components of a radio-antenna, tunable band-pass filter, amplifier and demodulator. They claim that by using carrier waves in the commercially relevant 40-400 MHz range in AM and FM frequencies that they were able to demonstrate successful music and voice repetition.
Apparently the nanotube radio essentially assembles itself, and because it can be easily tuned to a desired frequency band after fabrication it should be relatively easy to mass-produce.
In addition to a new generation of wireless communication devices and monitors, the technology could also prove especially valuable for biological and medical applications.
"The entire radio would easily fit inside a living cell, and this small size allows it to safely interact with biological systems," said Alex Zettl, the director of the Center of Integrated Nanomechanical Systems. "One can envision interfaces with brain or muscle functions, or radio-controlled devices moving through the bloodstream."
The carbon nanotube radio consists of an individual carbon nanotube mounted to an electrode in close proximity to a counter-electrode, with a DC voltage source, such as from a battery or a solar cell array, connected to the electrodes for power. The applied DC bias creates a negative electrical charge on the tip of the nanotube, sensitizing it to oscillating electric fields. Both the electrodes and nanotube are contained in vacuum, in a geometrical configuration similar to that of a conventional vacuum tube.
The nanotube radio does not work like a conventional radio even though is has the same essential components. Rather than the entirely electrical operation of a conventional radio, it has a mechanical operation, with the nanotube itself serving as both antenna and tuner.
Incoming radio waves interact with the nanotube's electrically charged tip, causing the nanotube to vibrate. These vibrations are only significant when the frequency of the incoming wave coincides with the nanotube's flexural resonance frequency, which, like a conventional radio, can be tuned during operation to receive only a pre-selected segment, or channel, of the electromagnetic spectrum.
Amplification and demodulation properties arise from the needle-point geometry of carbon nanotubes, which gives them unique field emission properties. By concentrating the electric field of the DC bias voltage applied across the electrodes, the nanotube radio produces a field-emission current that is sensitive to the nanotube's mechanical vibrations. Since the field-emission current is generated by the external power source, amplification of the radio signal is possible. Furthermore, since field emission is a non-linear process, it also acts to demodulate an AM or FM radio signal, just like the diode used in traditional radios.
Because carbon nanotubes are so much smaller than the wavelengths of visible light, they cannot be viewed with even the highest powered optical microscope. Therefore, to observe the critical mechanical motion of their nanotube radio, Zettl and his research team mounted their nanotube radio inside a high resolution transmission electron microscope (TEM). A sine-wave carrier radio signal was launched from a nearby transmitting antenna and when the frequencies of the transmitted carrier wave matched the nanotube resonance frequency, radio reception became possible.
"To correlate the mechanical motions of the nanotube to an actual radio receiver operation, we launched an FM radio transmission of the song Good Vibrations by the Beach Boys," said Zettl. "After being received, filtered, amplified, and demodulated all by the nanotube radio, the emerging signal was further amplified by a current preamplifier, sent to an audio loudspeaker and recorded. The nanotube radio faithfully reproduced the audio signal, and the song was easily recognizable by ear."
Image courtesy Zettl Research Group Lawrence Berkeley National Laboratory and University of California at Berkeley< 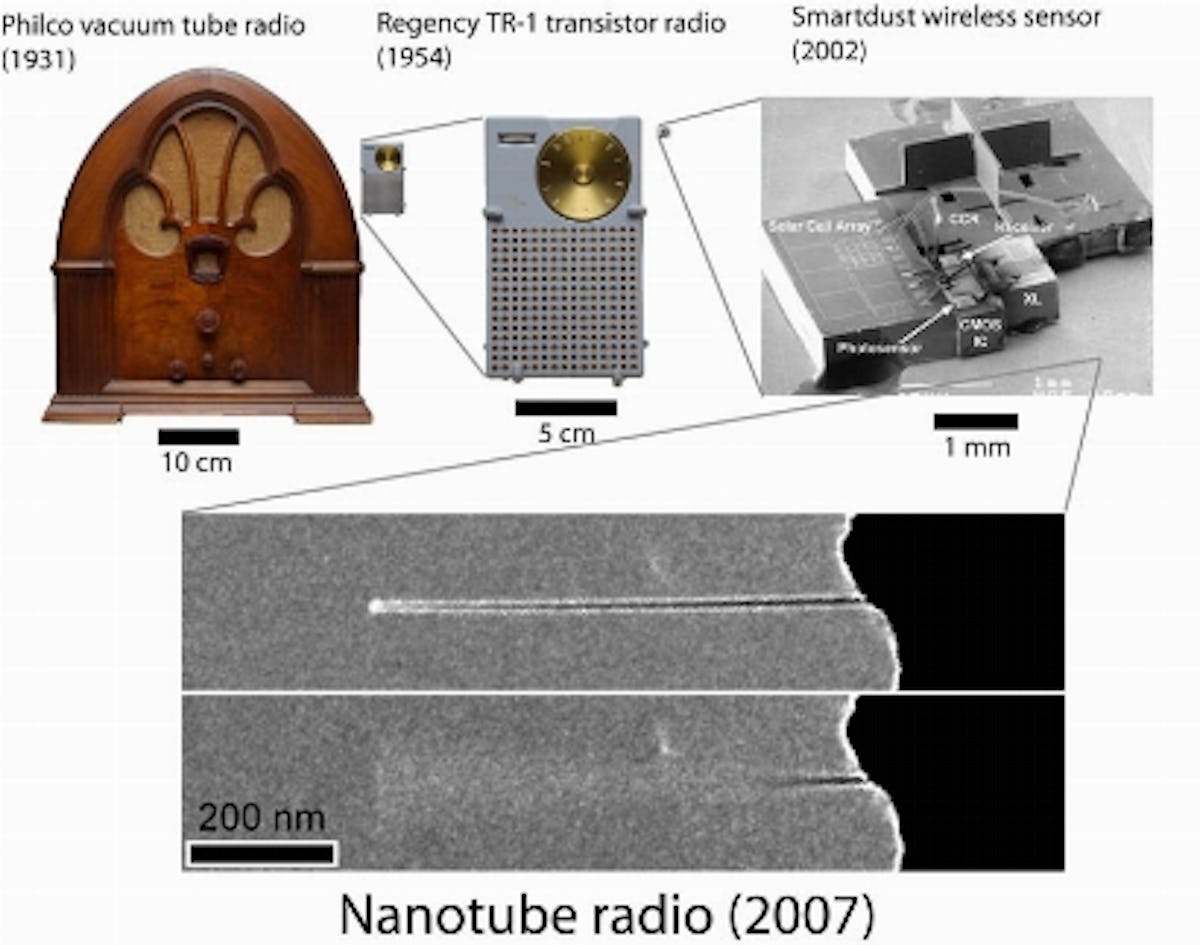 >The nanotube radio is over nineteen orders of magnitude smaller than the Philco vacuum tube radio from the 1930s
Berkeley Lab's Technology Transfer Department is now seeking industrial partners to further develop and commercialize the technology.
A paper on this work is now on-line at the Nano Letters Website. It was also published in the November 2007 print edition of Nano Letters.
The paper is entitled "Nanotube Radio" and the co-authors are Zettl, Jensen, Weldon and Garcia. In that same print edition, there appears a paper by Peter Burke and Chris Rutherglen of UC Irvine, reporting on the use of a carbon nanotube as a demodulator.
References www.lbl.gov/Science-Articles
Source of top image courtesy Zettl Research Group Lawrence Berkeley National Laboratory and University of California at Berkeley
For more on the subject attend Printed Electronics Europe 2008.