Business Korea reports, "The research arm of Samsung Electronics has developed a technology to make a silicon anode material for coating high crystal graphene on a silicon surface to realize an energy density almost two times more than that of existing lithium batteries."
Today's lithium batteries were largely developed by Sony 20 years ago. With those materials, the expansion of their capacity is at best two times. High-capacity battery materials are developed mainly in the United States. Silicon may raise the capacity more than 10 times that of the graphite currently used as anode material but so far that comes with inadequate cycle life. In the study, published in Nature Communications, the new battery technology employs use of graphene on the silicon surface and that confers volume expansion leading to extended battery life.
The journal explains, "Here we report direct graphene growth over silicon nanoparticles without silicon carbide formation. The graphene layers anchored onto the silicon surface accommodate the volume expansion of silicon via a sliding process between adjacent graphene layers. When paired with a commercial lithium cobalt oxide cathode, the silicon carbide-free graphene coating allows the full cell to reach volumetric energy densities of 972 and 700 Wh l−1 at first and 200th cycle, respectively, 1.8 and 1.5 times higher than those of current commercial lithium-ion batteries. This observation suggests that two-dimensional layered structure of graphene and its silicon carbide-free integration with silicon can serve as a prototype in advancing silicon anodes to commercially viable technology."
The journal continues, ~"The volumetric capacity of Gr-Si was elucidated in comparison with those of the theoretical and commercial cases (Fig. 1a). The volumetric capacity of 5 wt%-Gr-Si (for the electrode with 3.0 mAh cm−2 in Fig. 2c) ranges from 2,500 to 3,000 mAh cm−3, which is close to the theoretical value (4,284 mAh cm−3) of the pristine Si particles on the assumption of their ideal packing (details in figure caption). The present values are far higher than that (550 mAh cm−3) of the current commercial graphite-based anodes. To further assess the practical viability of 5 wt%-Gr-Si, full cell performance was examined by pairing with a commercial cathode, LiCoO2. By consideration of the average cell voltage of 3.5 V, the areal capacity of 3.0 mAh cm−2, and a total electrode thickness of 108 μm (electrode+separator+current collector, Gr-Si thickness=15 μm), the volumetric energy density of the present full cell reaches 972 Wh l−1. This value is remarkable since it is 1.8 times as large as that (550 Wh l−1) of widely used current commercial LIBs calculated based on the same metric (http://www.samsungsdi.com/lithium-ion-battery/overview).
Figure 1: The volumetric energy density of 5 wt%-Gr-Si. 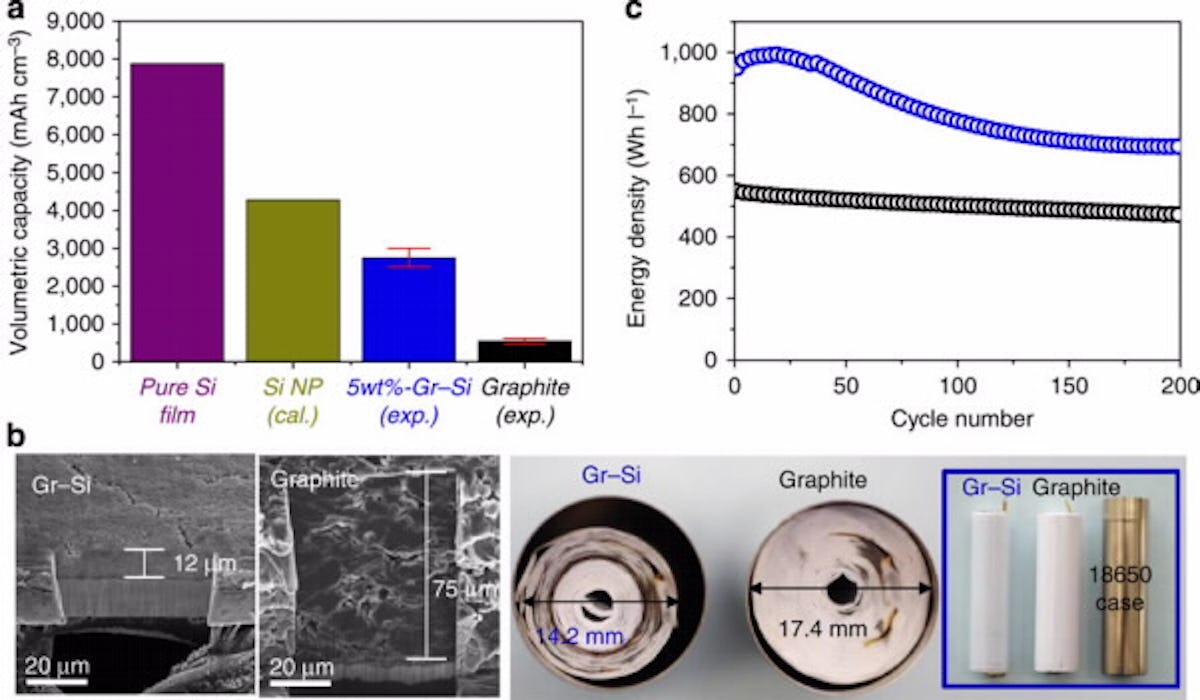 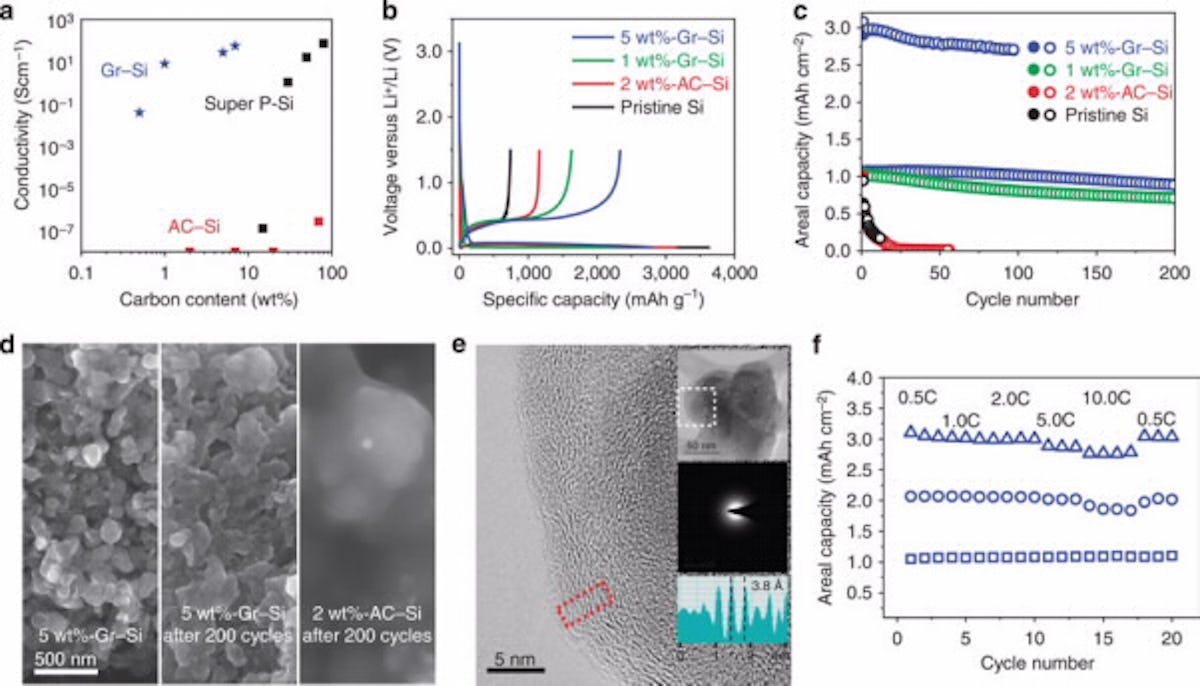 Samsung, which has been making efforts to improve battery capacity to differentiate itself from other global smartphone rivals, expects that it could bring a significant change to both mobile devices and the electronic car industry.
Rumours suggest that the technology may need two or three years for commercialization.
Source: Business Korea, Nature Communications
Images: Nature Communications
For more on the subject read Analysis of over 140 Lithium-based Rechargeable Battery Manufacturers: Chemistry, Strategy, Success