Contact lenses with circuits could be a platform for superhuman vision

USA - Bionic eyes as seen in the popular 1970's TV show "The Six Million Dollar Man" may not be as far fetched as it seems. Engineers at the University of Washington, US have for the first time used manufacturing techniques at microscopic scales to combine a flexible, biologically safe contact lens with an imprinted electronic circuit and lights.
"Looking through a completed lens, you would see what the display is generating superimposed on the world outside," said Babak Parviz, assistant professor of electrical engineering at University of Washington. "This is a very small step toward that goal, but I think it's extremely promising."
The virtual display can be projected onto a windscreen so that a driver or pilot can read a vehicle's speed. A video-game company could use the contact lenses to completely immerse players in a virtual world without restricting their range of motion. The internet could be accessed on a midair virtual display screen by people on the move. The prototype device contains an electric circuit as well as red light-emitting diodes for a display, though it does not light up yet. The lenses were tested on rabbits for up to 20 minutes and the animals showed no adverse effects.
The aim is to make installing or removing the bionic eye as easy as popping a contact lens in or out, and once installed the wearer would barely know the lens was there.
The scientists built the circuits from layers of metal only a few nanometers thick, about one thousandth the width of a human hair, and constructed light-emitting diodes one third of a millimeter across. They then sprinkled the grayish powder of electrical components onto a sheet of flexible plastic. The shape of each tiny component dictates which piece it can attach to, a microfabrication technique known as self-assembly. Capillary forces - the same type of forces that make water move up a plant's roots, and that cause the edge of a glass of water to curve upward, pull the pieces into position. 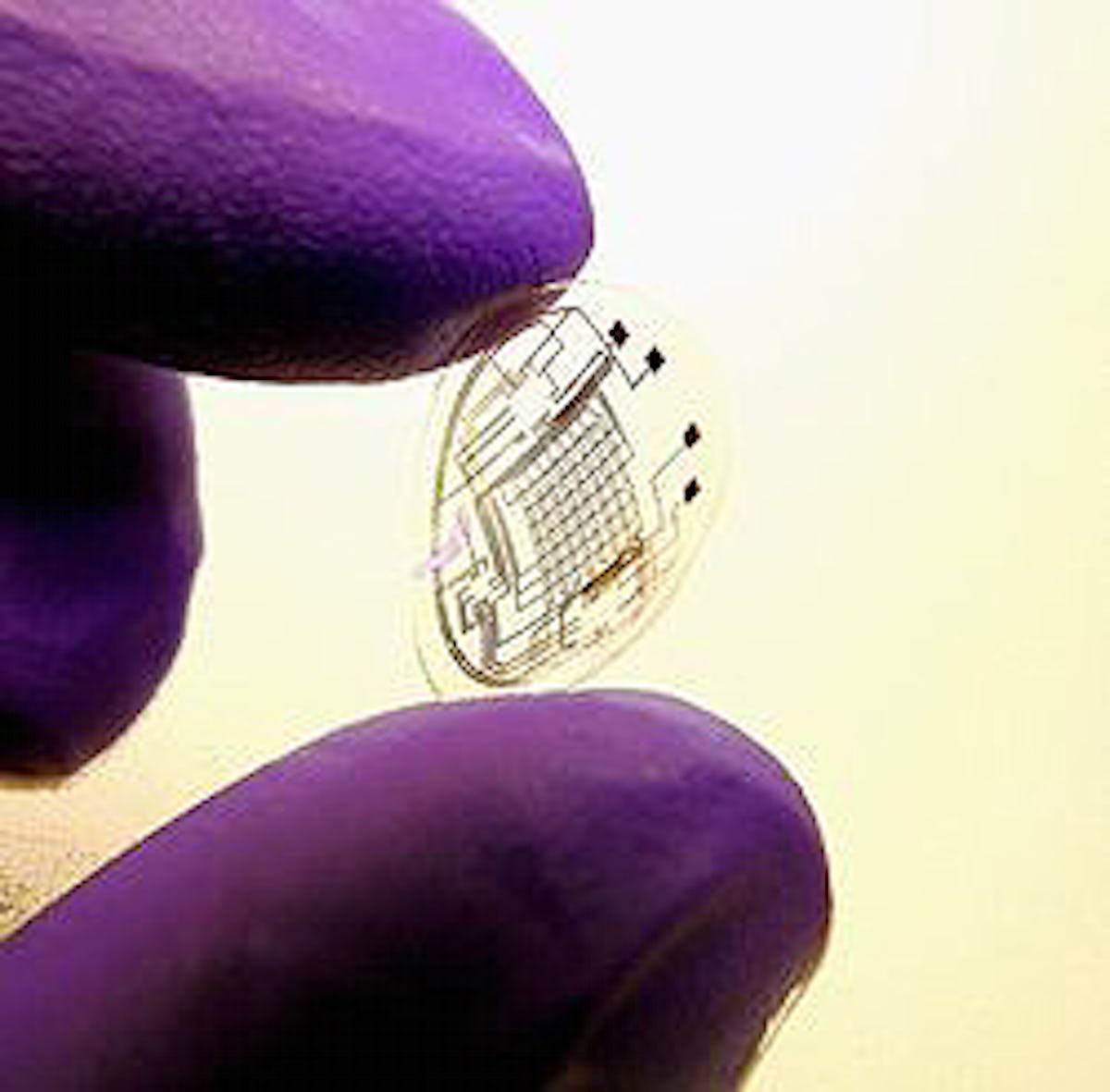 A researcher holds one of the completed lenses.
"The prototype contact lens does not correct the wearer's vision, but the technique could be used on a corrective lens - and all the gadgetry won't obstruct a person's view," Parviz said.
There is a large area outside of the transparent part of the eye that can be used for placing instrumentation. They hope future improvements will add wireless communication to and from the lens and that power to the whole system will be through a combination of radio-frequency power and solar cells placed on the lens.
Although a fully fledged display won't be available for a while, a version that has a basic display with just a few pixels could be operational soon say the researchers.
The results were presented at the Institute of Electrical and Electronics Engineers' international conference on Micro Electro Mechanical Systems.
Reference: University of Washington News
Source of images: University of Washington News
For more information attend Printed Electronics Europe 2008.