What a difference a year makes. Now we have chipless (no silicon chip in the tag) RFID in the International Space Station and that is because of superior performance not cost. 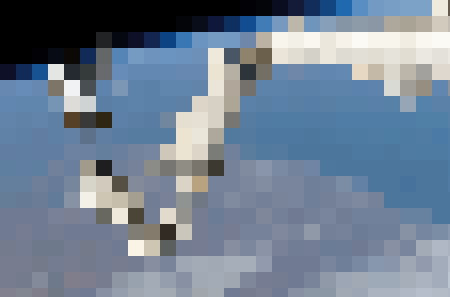 Source: NASA
Following poor availability of RFID enabled mobile phones in the West we have a clever label that links to the phone by Bluetooth. That makes any phone RFID enabled, to satisfy the huge pent up demand. Phones will get you on the bus or train, let you buy things in shops and much more besides. And those labels will read UHF as well as HF tags, much like many of the planned RFID enabled phones, because UHF RFID is becoming commonplace, particularly in the Americas, where it is the first option considered for most applications beyond cards, tickets, library books, secure access, animals and passports. And chipless technology is now capable of UHF, when even HF was a struggle only a year ago. Indeed, printed nanosilicon transistors meet silicon chips head on by meeting the world's favourite RFID specification ISO 14443 - at HF - starting with tickets with 80% cost advantage over the relevant silicon chip, with 90% promised within two years. Indeed, after being written off as a mature technology, HF RFID is taking a great leap forward with improvement of many parameters by a factor of ten.

Conference at the leading edge

All this was revealed at the major conference RFID Smart Labels USA Feb 20-21, staged by IDTechEx. It was RFSAW that presented the SAW RFID now in space, with radiation tolerance and technical excellence much valued. Chipsensors presented that elegant phone upgrade to RFID. The Paris railway system RATP was particularly enthusiastic about using mobile phones for ticketing

Then there is active RFID taking business even faster than passive RFID. As Time Domain said at the conference, active RFID, on IDTechEx figures, is growing from 12 to 28% of the RFID market in the next ten years even as that market quintuples and the versions acting as real Time Locating Systems RTLS are growing even faster than that with the Ultra Wide Band UWB versions growing fastest within RTLS, nor because of cost but because of performance. UWB gives the best accuracy and immunity from interference in or out, plus superlative avoidance of multipath errors and very low power, something verified by BP which described its use in personnel evacuation. However, Ekahau described how the lower cost RTLS that leverages existing WiFi infrastructure is also making very rapid progress, notably in hospitals, with IDTechEx, the Yankee group and others forecasting that RTLS will be a billion dollar market well within ten years.

Despite only slow progress in easing, let alone harmonising, the different radio regulations for UHF RFID across the world concerning signalling protocol, frequency, bandwidth and permitted power, it is now standard for air baggage and largely standard for pallets and cases. Toppan Printing described how it is finding many other uses in East Asia now and this is the case elsewhere in the world. Analysts Robert W Baird saw:
Investments stronger than most think
2007 investments
We note that Alien, Impinj and Intelleflex are primarily in UHF RFID. The Alien Technology breakout session on UHF had standing room only.
Large RFID orders are being landed for a wide variety of applications. One example was described by Digital Angel's Destron Fearing division, a company that has recently landed $27 million of business for sophisticated large LF readers in rivers to monitor fish for conservation purposes, the funding coming from Bonneville Power and the US Government. The company said that livestock tagging will be legally required in Europe in two years, the delay being caused by several new countries joining the European Community recently. However, cattle will not be RFID tagged by law until two years after that. Canada, Australia and many other countries have laws calling for cattle RFID tagging for disease control, subsidy policing and other purposes and efficiency is a spinoff benefit from this large RFID application.
The status of animal tagging in the larger nations was summarised as:
For 12 years from approval of appropriate standards, the implementation has been very slow but we now have:
Companion animals: Good progress in Europe, USA and Australia.
Slaughter animals: Major Events
There are difficulties to be resolved with these standards, including coping with the fact that fish travel at up to 40 miles per hour.

Military and other big users

By contrast, Savi Technology and the US Army described progress in the military and heavy logistics applications of RFID where just one of its orders has just been expanded to nearly half a billion dollars by the US Military. The US Military is now a strong purchaser of both 433.92 MHz active RFID and UHF passive RFID, an example of an application being shown below. RFID with sensing is also of great interest to it.
IDTechEx described other major wins such as the recent ACS half billion dollar order to upgrade the New York non-stop road tolling RFID and the same company doing card systems for transport in Lithuania and Marseilles in France.

Keesing described how the RFID e-passports now represent 75% of the global output of 106 million passports and IDTechEx explained that this has created a large market because the RFID inlays typically cost $5 making the market value dwarf such high profile applications as retail supply chains, which remain one of the smallest RFID markets by value because of heavily loss making prices driven by oversupply. Indeed Keesing put the total annual market for all associated passport goods and services at $4-8 billion already.

Importance of the USA, China, Japan and UK

Curiously, the UK is second to the USA in issuing e-passports, larger countries such as Japan and Germany being laggards as yet. This fact chimed with the IDTechEx Knowledgebase of 3200 case studies in 104 countries, available to all delegates. It reveals that the UK is second to the USA in number of RFID projects globally. Of course, China and Japan are well ahead of the UK in money spent on RFID because they have some huge projects, with more planned. That said, if the UK national ID card scheme continues to go ahead at $10 billion, that country will stay somewhere in the world's top six RFID users by value.
The RFID Smart Labels USA conference is part of a global series of RFID events hosted by IDTechEx, and which also includes RFID Europe and the Active RFID & RTLS Summit USA.