RFID is thriving, reaching total sales of $10.1bn in 2015 with a large scope ahead for continued roll-out in many established markets and growth in new markets. However, companies must consider their positioning as many new players enter the market while the value chain consolidates, finds IDTechEx Research in the new detailed report, RFID Forecasts, Players, Opportunities 2016-2026 which covers the entire industry.
38% of the 2015 market value is for the tags themselves - totalling 9.1bn tags begin sold in 2015, up from 7.8bn tags in 2014. That is across all the main RFID frequencies, and for passive and active RFID. 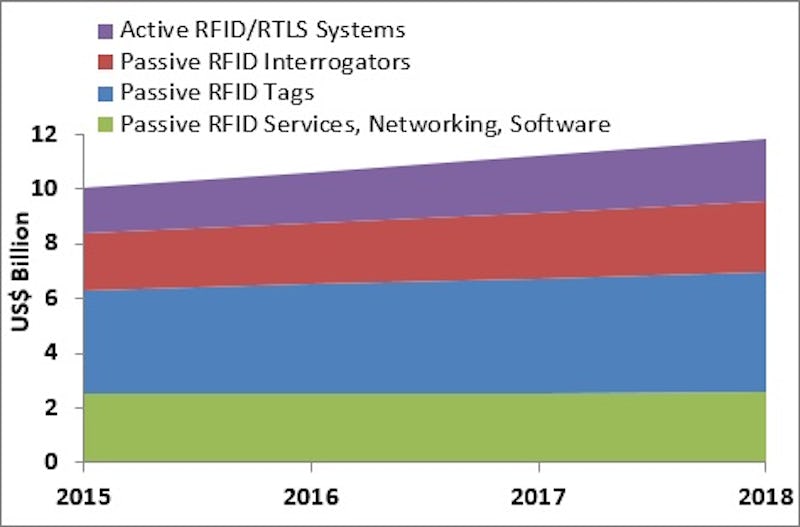 Figure 1. Total RFID market projections. Source: IDTechEx Research report RFID Forecasts, Players, Opportunities 2016-2026
A significant part of that growth is attributed to the growing implementation of passive UHF RFID tags (also now known as RAIN RFID, the alliance set-up last year to promote the technology). UHF RFID is being widely adopted for tagging apparel, with 3.75bn tags used for that application alone in 2015 versus 3bn in 2014. In 2015, that represents less than 15% of the total addressable market for retail apparel which is but one of many applications.
For shorter range HF RFID, business is growing as banks move to secure RFID cards enabling contactless payment - with just under 2bn being sold for that and other contactless card applications in 2015. NFC is part of HF RFID too, being backwardly compatible with other HF RFID standards. In 2015 NFC tag sales excluding payment and personal ID applications will amount to 230m units, used in applications such as tagging computer game figures and setting up Bluetooth pairing of consumer electronic devices. In RFID niche markets can be large by volume and highly profitable.
So, the numbers are buoyant and smiles are all around. However, the continued growth has resulted in many new entrants and companies are having to carefully consider their positioning in order to be best placed as the business grows. For example IDTechEx Research, which has studied the RFID sector since 1999, has profiled more than 150 RFID companies in China, grabbing market share in some areas such as RFID inlay manufacture. Tag and reader hardware companies are staking claims in software platform offerings - some half heartedly, others more robustly, trying to face the challenge of moving from a horizontal product offering into software which, at an applicational level, often needs to be built with the vertical application needs in mind. Despite the growth there are still only a handful of companies with more than $100m in RFID sales, but several moving into that category. There is much to play for, and much opportunity to lose too for those ill positioned.
The IDTechEx Research report RFID Forecasts, Players, Opportunities 2016-2026 assesses the entire industry in unparalleled detail. Historic sales of RFID are given from 2005 to 2015. Tables break out the sales of RFID by tag numbers, average sales price and total market value for 39 application areas, in addition to reader/interrogator sales and software sales. This is across LF, HF and UHF passive RFID and active RFID.
Research is based on interviews with players all over the world, from visits with Chinese companies conducted by the IDTechEx Chinese RFID analyst Dr Xiaoxi He to data aggregation based on supplier information provided under confidentiality agreements. This single report is based on 15 years of knowledge and will provide you with clarity across the market place, saying it as it is, covering the opportunities and where the sector is going. Learn more at www.IDTechEx.com/rfid.
Learn more at the next leading event on the topic: Printed Electronics Europe 2020