Researchers at the National Institute of Standards and Technology (NIST), USA have set the stage for building the "evolutionary link" between the microelectronics of today built from semiconductor compounds and future generations of devices made largely from complex organic molecules. In an upcoming paper in the Journal of the American Chemical Society, a NIST team demonstrates that a single layer of organic molecules can be assembled on the same sort of substrate used in conventional microchips.
The ability to use a silicon crystal substrate that is compatible with the industry-standard CMOS (complementary metal oxide semiconductor) manufacturing technology paves the way for hybrid CMOS-molecular device circuitry—the necessary precursor to a "beyond CMOS" totally molecular technology—to be fabricated in the near future.
Scientists classify crystal structures by the particular plane or "face" cutting through the crystal that is exposed. Most research to date on silicon substrates for molecular electronic devices has been done with a crystal orientation that is convenient for organic molecules but incompatible with CMOS technologies. For their electronic device, the NIST team first demonstrated that a good quality monolayer of organic molecules could be assembled on the silicon orientation common to industrial CMOS fabrication, verifying this with extensive spectroscopic analysis.
They then went on to build a simple but working molecular electronic device—a resistor—using the same techniques. A single layer of simple chains of carbon atoms tethered on their ends with sulfur atoms were deposited in tiny 100-nanometer deep wells on the silicon substrate and capped with a layer of silver to form the top electrical contact. The use of silver is a departure from other molecular electronic studies where gold or aluminum has been used. Unlike the latter two elements, silver does not displace the monolayer or impede its ability to function.
The NIST team fabricated two molecular electronic devices, each with a different length of carbon chain populating the monolayer. Both devices successfully resisted electrical flow with the one possessing longer chains having the greater resistance as expected. A control device lacking the monolayer showed less resistance, proving that the other two units did function as nonlinear resistors.
The next step, the team reports, is to fabricate a CMOS-molecular hybrid circuit to show that molecular electronic components can work in harmony with current microelectronics technologies. 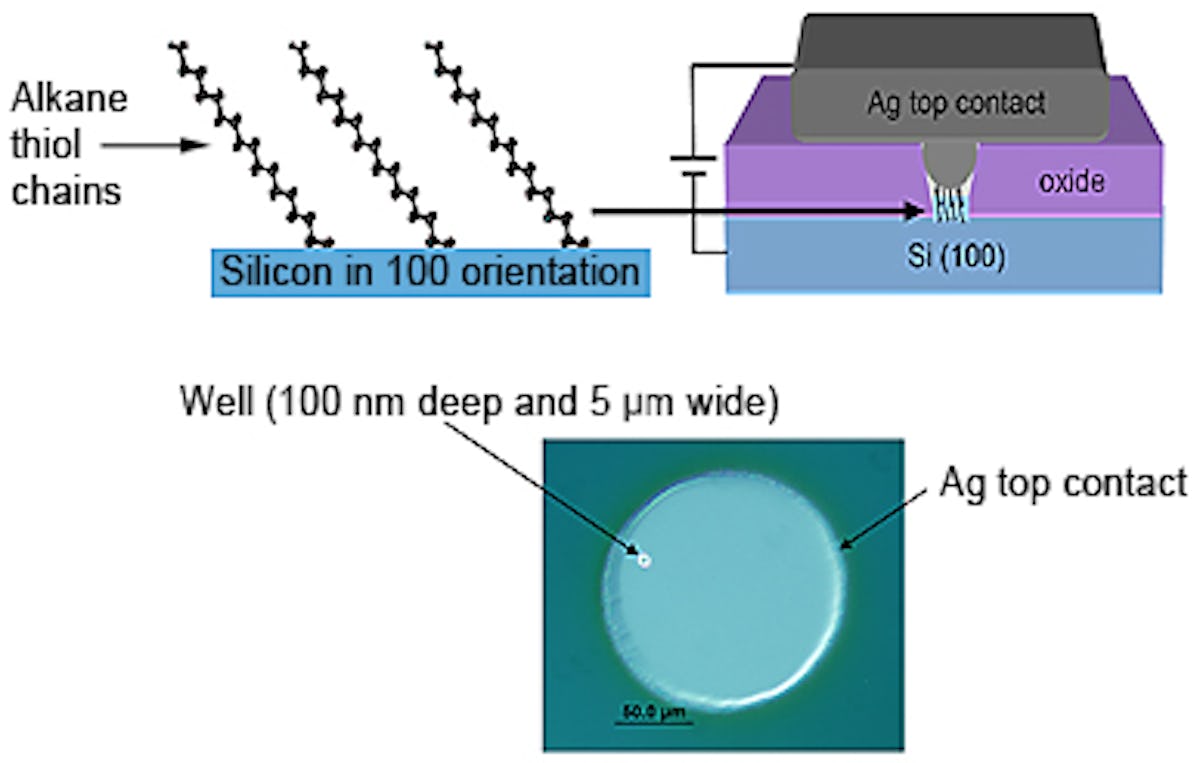 Side and top views of the NIST molecular resistor. Above are schematics showing a cross-section of the full device and a close-up view of the molecular monolayer attached to the CMOS-compatible silicon substrate. Below is a photomicrograph looking down on an assembled resistor indicating the location of the well. Image NIST
For more attend Printed Electronics Europe 2008.