Most of the Chinese suppliers are doing some hard thinking about repositioning in the face of shrinkage and radical change in the structure of the nevertheless huge Chinese market. In the new edition of the IDTechEx report RFID Forecasts, Players, Opportunities 2008-2018 it is shown that the national ID card scheme and the huge city card schemes in China are nearly complete and there is nothing big enough to compensate in 2008, though 2009 will see growth again.
For example, there is a surge in library tagging and air baggage tagging coming along and pressure to use RFID on mine personnel to reduce the chronic accident rate, some adoption already having begun. One day there may be laws to tag all 150 million dogs in China and 2.4 billion pigs yearly but IDTechEx finds that there is no hurry to do this and when it is done it will almost certainly be on a province by province basis.
However, all eyes are on China for animal tagging, mainly with label-like ear tags which are mainly LF though some lower cost, more printable HF versions are being trialled. Even sample tagging of the 20 billion chickens yearly is a possibility to combat avian flu. Pet mink and pandas are already tagged thanks to Beijing Winson Smart Labels and others. Read RFID for Animals, Food and Farming 2008-2018 which analyses what will be the largest global RFID business of all in value and volume.

Those making inlays for the China National ID Card and the complete cards themselves certainly need to find other things to do, even though the secure access card business is buoyant and there are perhaps 100 million replacement and new adult ID cards to be made ongoing. Among these companies are:
Not surprisingly, many RFID card and card reader manufacturers now make other forms of RFID. For the Chinese, there are three escape routes ahead - either take market share from competitors, grab the newly buoyant RFID businesses in China (such as library, retail pallets and cases, postal, air baggage) and help to create other new RFID sectors and thirdly to export. The exporting is beginning through joint ventures with such Western RFID companies as Confidex, ASK and UPM Raflatac and through direct sales. However, most Chinese RFID manufacturers know nothing about exporting such products. So far, they have been gorging on the huge domestic market and ignoring exports.
As for creating new RFID markets in China, something can be learnt from the rest of the world where healthcare (read RFID for Healthcare and Pharmaceuticals 2008-2018) is a large and rapidly growing market not least because of rapid adoption of Real Time Locating Systems RTLS on staff and assets. Read Real Time Locating Systems 2008-2018 That does not yet occur to any significant extent in China, a country where use of RFID in leisure is similarly under-developed. Of course RFID is used in leisure in China. The point is that it is not used to the extent seen elsewhere. At the Beijing Women's Baseball International Tournament in 2006, Beijing Winson Smart Labels provided RFID tracking of the cap store and RFID cards and tens of millions of RFID tickets will be in use in the Beijing Olympics. A recent project uses RTLS on prisoners thanks to 2.45GHz active tags with printed antennas integrated by InterComm Technology.

Hong Kong International Airport is one of the global leaders in using RFID on air baggage though it is only used on some items as yet. An order of 100 million or so has been placed for delivery over a number of years. Now Emirates Airline based in Dubai is partnering with London Heathrow, Dubai International and Hong Kong International airports to trial RFID in baggage handling. Of course, it will use the IATA global standard UHF ISO 18000-6 tags with airline numbering codes not EPC. The antennas are typically printed. Potential for RFID in baggage tags is 80 million yearly at Hong Kong airport and hundreds of millions yearly in China as a whole, global potential being over two billion yearly. That potential will be fully met when the chip is not needed and the whole RFID tag including transistors is printed to get the price down from 30 cents to 3 cents or so.
Emirates will be investing close to AED 2 million, to test the effectiveness and benefits of RFID against the existing barcode tracking system. It will be the largest-ever trial of its kind for the airline industry, some half a million bags on Emirates flights will be tagged with RFID chips over the 6-months of the trial. 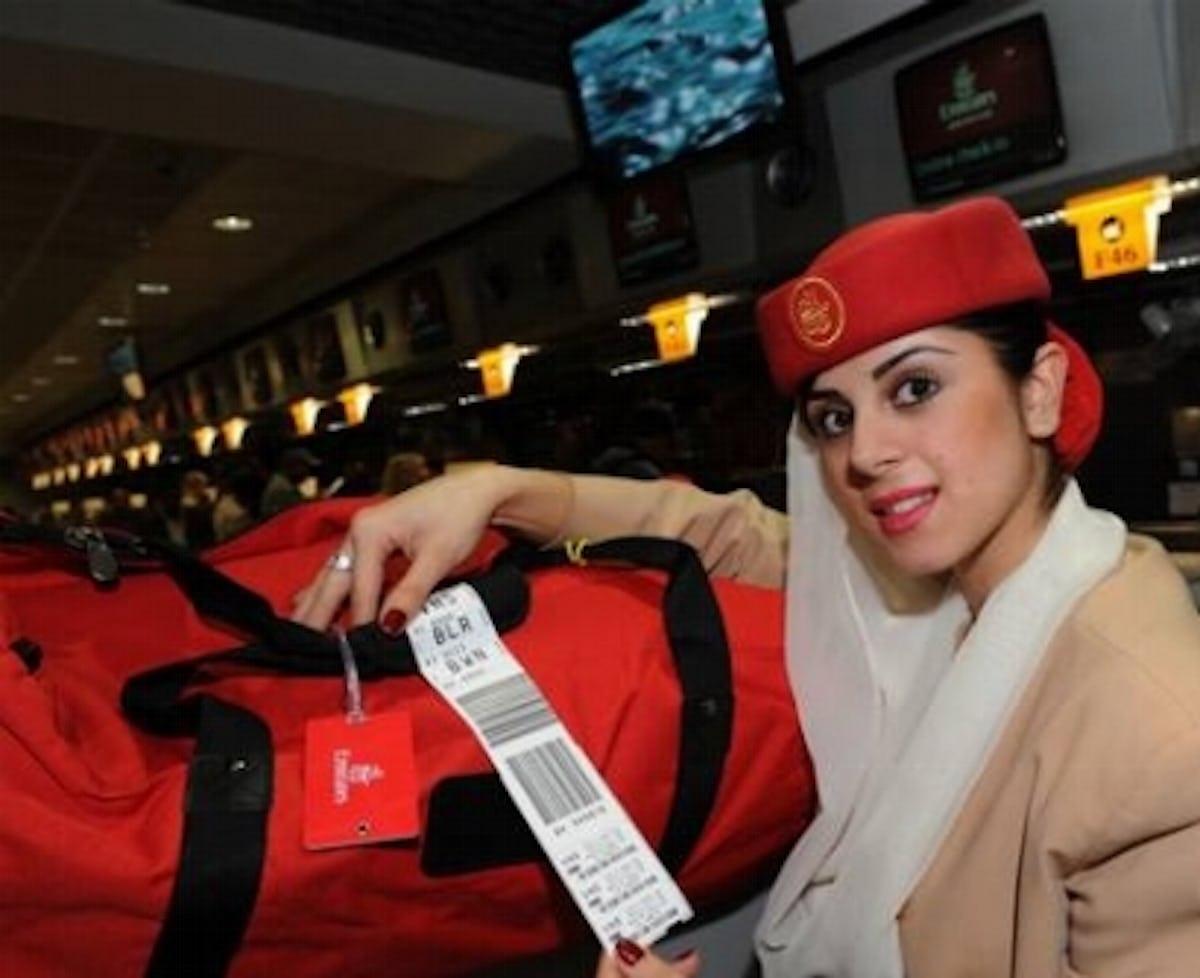 Source: www.aviationrecord.com
The airline hopes its investment will help revolutionise the way bags are tracked and monitored, and find innovative solutions to handle the increasing volumes of baggage every year as more people around the world use air travel more frequently.
"Previous RFID trials by other parties on a smaller scale have shown that the technology almost eliminates scanner misreads, significantly improving the efficiency of the baggage system and customer experience. We are now applying this on a much larger scale at three major airport hubs, including Emirates Dubai home-base, thus allowing the trials to include most possible baggage handling scenarios, including international transit." said Dale Griffith, Emirates Divisional Senior Vice President Airport Services.
RFID equipment has been installed at some of Emirates check-in desks at the three participating airports. During the trial, trained staff will apply tags containing RFID chips to bags as part of the usual check-in process. The chips contain stored information such as the bag unique ID number and route. In addition to the embedded RFID chips, these tags will also continue to display the traditional bar code.
As the bags pass through the airports baggage system the chips are read thus enabling effective sorting, security screening and delivery to the aircraft. Arriving bags are read on entry to the baggage system and receipted into the system for effective tracking. The chips will enable bags to be tracked at every stage of their journey, and minimise the possibilities for mishandling baggage.
In the future, RFID technology could also make it possible for airlines to send a text-message alert to notify passengers the moment that their luggage has arrived on the baggage carousel.

Meanwhile, there are plenty of smaller orders in China. For example, Wavetrend of the UK has recently tagged art treasures at Lehman Brothers in Hong Kong. This provides real-time alarm information and security for individual art objects, display cases & warders. Items are also protected in storage and transit.
The benefits of this system are:

3M, which tracks underground pipes with self leveling RFID tags in buried balls, has landed a large order to do the same in the vast Olympic campuses around Beijing.
For more read RFID in China and attend Printed Electronics Europe 2008.
IDTechEx technical and marketing consultants are available in Japan, Germany, the UK and the USA to help you position and optimize your products. Clients include Hewlett Packard and many other electronics giants, Rexam and other packaging giants and many of the world's largest chemical, printing and plastics companies. We also help raise finance and find targets for investors. Contact Dr Peter Harrop at p.harrop@idtechex.com.