IDTechEx is currently in Japan, researching its event Printed Electronics Asia 2008, to be held on October 7-8 in Tokyo. Here Raghu Das summarises some of his findings as he visits the leading giants there.
Speaking to key developers of OLED displays, companies agree that the market for such displays will be at least $0.69 Billion this year, as forecast by IDTechEx. This value includes the front OLED plane and the back plane driver circuit, which is usually polycrystalline or amorphous silicon.
While passive matrix OLED displays have been available for some time, growth over recent years in the OLED market has been from active matrix (AM) displays thanks to newly installed capacity. One of the first applications of an AMOLED display was the display in a cellphone from KDDI launched in March in 2007. Since then Nokia has also released a phone with an OLED display and Sony Ericsson, Toshiba and Hitachi have announced their intention to do so over the coming year in their cellphones.
At the end of 2007 Sony launched the first AMOLED TV set in Japan, also available in the US. It is an 11 inch display and costs approximately $2,000. The size of the display versus the price does not make it favourable to consumers wanting large displays but Sony markets the product on other merits such as better contrast (1:1,000,000 compared to LCDs of 1:100,000), better colour realisation and faster response times. Still, the high price means Sony is only producing 2000 units a month, but Sony sees that the price will drastically fall as demand increases - the OLED display is intrinsically cheaper than LCD displays and has a better image quality and wider viewing angle as shown in the image below. 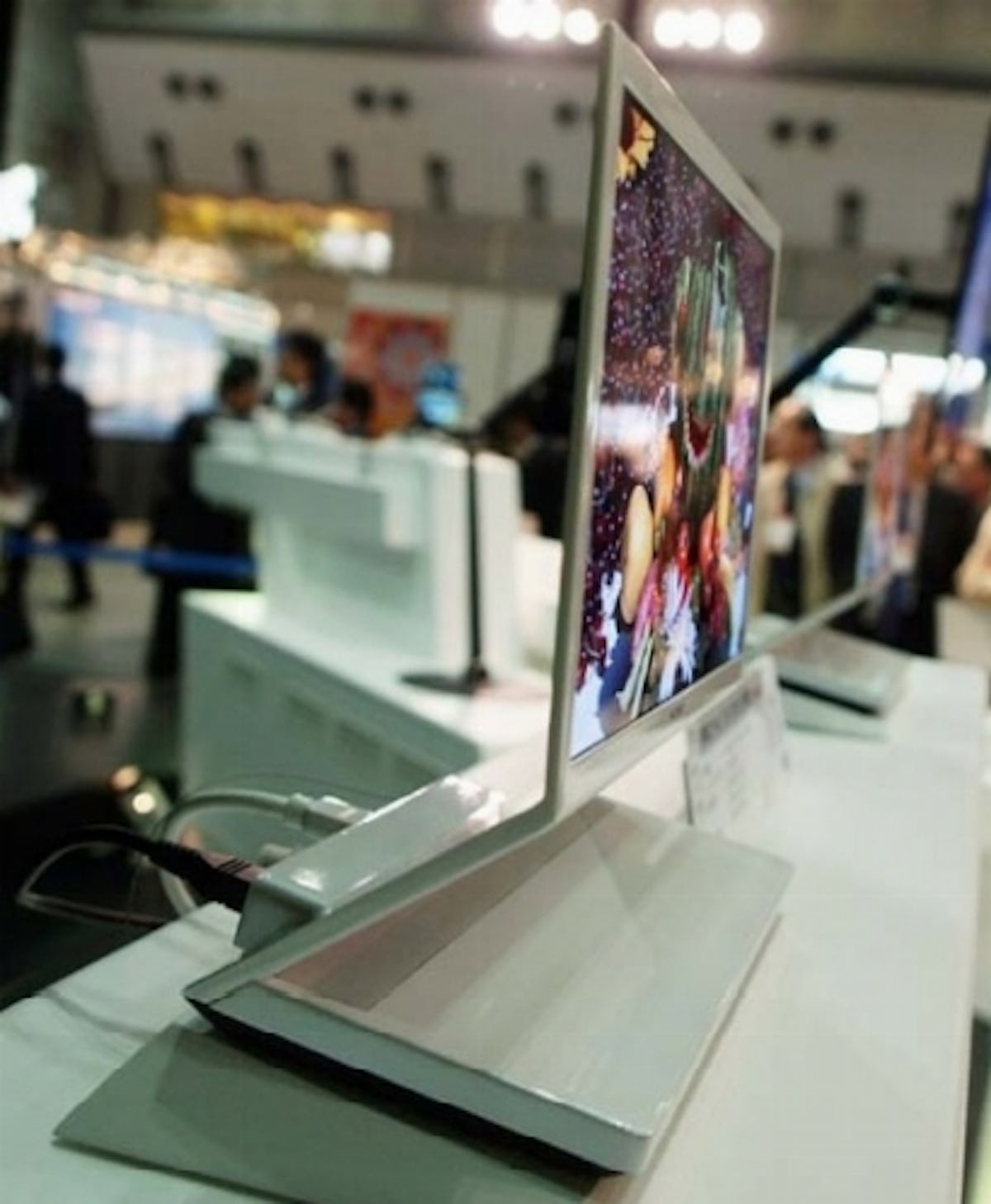 The lifetime of the materials used are no longer seen to be an issue for the product.
Sony intends to launch a version in Europe shortly but this is taking slightly longer due to the different video format used in Europe (PAL as opposed to NTSC).
The display is made using a vapour deposition process in a vacuum - none of the display is printed. It uses small molecule organic materials and is sandwiched in glass. This manufacturing process is fairly straight forward for the front plane but limits the size of the display to about that of a gen4 size substrate at VGA resolution. The size limitation is due to the mask used and new technology is needed in order to make larger displays with small molecules, which Sony and others are working on.
In an active matrix display, each pixel is driven by its own transistor. OLED displays are current driven, therefore suited to low temperature polycrystalline silicon (LTPS) or amorphous silicon (aSi) driver backplanes. However, aSi versions have a residual voltage when the voltage is removed which can create a ghosting effect in the image. LTPS does not show this as much and is therefore used in commercial AMOLED displays today, but it is more expensive and difficult to make large.
Several companies have developed ways of reducing the residual voltage using aSi backplanes, and demonstrated these in 28" + OLED prototypes. Sony use a laser to heat the aSi layer, which is then transferred from a high temperature donor sheet to the glass substrate and the OLED front plane deposited. The product is then heated so the residual organic material is sublimed in a vacuum (goes from solid to gas). 3M has developed a similar process to Sony, but using thermal transfer rather than sublimation.
Sony told IDTechEx that it is investing $200 Million in 2008 to develop large area manufacturing of small molecule OLED displays.
Read the latest from Samsung and printed OLEDs in part 2 here.