Interfacing with machines undergoes a constant evolution, allowing for wider adoption of computing devices over time, as interaction becomes more "natural". According to IDTechEx Research, smartglasses are bringing about the next big step in this ever-changing space. Having witnessed the transition from keyboards to touchscreens in the last decade, a new wave of innovation is making interfacing with computers gesture-based, and nowhere else is that more obvious currently than in eye-worn computing. That is why the market for smart eyewear is expected to reach almost $45bn by 2026 according to the newly published IDTechEx report Smart Glasses and Contact Lenses 2016-2026. Smart Eyewear - From AR and VR headsets to functional contacts: Technologies, Players, Forecasts & Opportunities.
Some of the newer devices that have ignited the current interest in eye-worn computing are going above and beyond the conventional definition of a smart object; they are in effect, portable, wearable computers with a host of functionalities, specially designed apps etc. that add new ways for the wearer to interact with the world along with smartphone capabilities, health tracking options and many other features. The features of some of the more advanced devices have been based on and have sparked worldwide innovation efforts aiming to create an ecosystem of components that will enable what is bound to be a revolution in form factor for wearables.

Gesture-based interfacing with smartglasses is enabled by components such as HD cameras, LEDs, positioning/location/infrared sensors etc., which allow devices to "perceive" three-dimensional objects and their depth, monitor movement and direction, capture gestures and even track the wearer's head and eye, in order to interpret all this input as control commands through specialized algorithms. A lot of the technology already exists in a slight different incarnation in smartphones and smartwatches that include a lot of those functionalities already. Current innovation is focusing on further developing these components in order to create wearable sensors that are fit for purpose, optimized and designed specifically for the usage scenarios and form factors that are becoming commonplace in wearable computing. It is thus no wonder that most of the developers of smartglasses are securing IP in this space as it is a key technology differentiator of each device that is being brought to market and significantly affects product desirability. After all, the easier it is to interact with a device, the wider its acceptance.

Scoring maximum points in desirability is the way to successful commercialization of any product. It's also a very complex metric that is always difficult to get right as for each product there exists a very different set of requirements, each with varying levels of importance. Smartglasses are no exception; considerations are multi-sided and have to address multiple issues at the same time, with the additional obstacles due to the paradigm-shifting novelty of such a device.
Sleek design is a significant factor: the look and feel of the device should respect current fashion trends as much as trends in electronics. A pair of smartglasses is aiming to become a piece of apparel worn on a daily basis and as one, it should not feel out of place or "ugly" when worn. This is why Luxottica, the biggest eyewear company in the world and owner of the most recognizable eyewear brands, is working closely with Google on the development of the next version of Glass, bringing together trend-setting knowhow in eye-worn apparel as well as in electronics.
The range of functionalities is also a key feature for a successful device: making sure that end-user needs are met if not surpassed is paramount in order to achieve consumer acceptance. It is thus no wonder that smartglasses are initially being made available to developers that are creating an ecosystem of applications, dreaming up the ways people would want to use their smartglasses and making them possible.
Finally, as with every portable device, and since no one wants to be constantly connected to the mains for recharging, design vs. functionalities vs. energy autonomy create a triangle of trade-offs that must be optimally balanced. This sets requirements for developers of components such as micro-displays, batteries and supercapacitors, wireless communications circuits to name a few, as they need to feature low power requirements, flexibility in integration and form factor, and even transparency in some cases.

To conclude, smartglasses (whether "augmented" or "virtual" reality ones) are creating a new market for electronics that is also a paradigm shift in how users will interact with electronic devices as well as the world around them. In the next few years, the focus remains on optimizing components and the creation of features, both for consumer as well as enterprise applications. The market will quickly begin to take off though, as forecasted by IDTechEx research and described in the graph below: already in 2019 the market for smartglasses will be approaching $7bn. 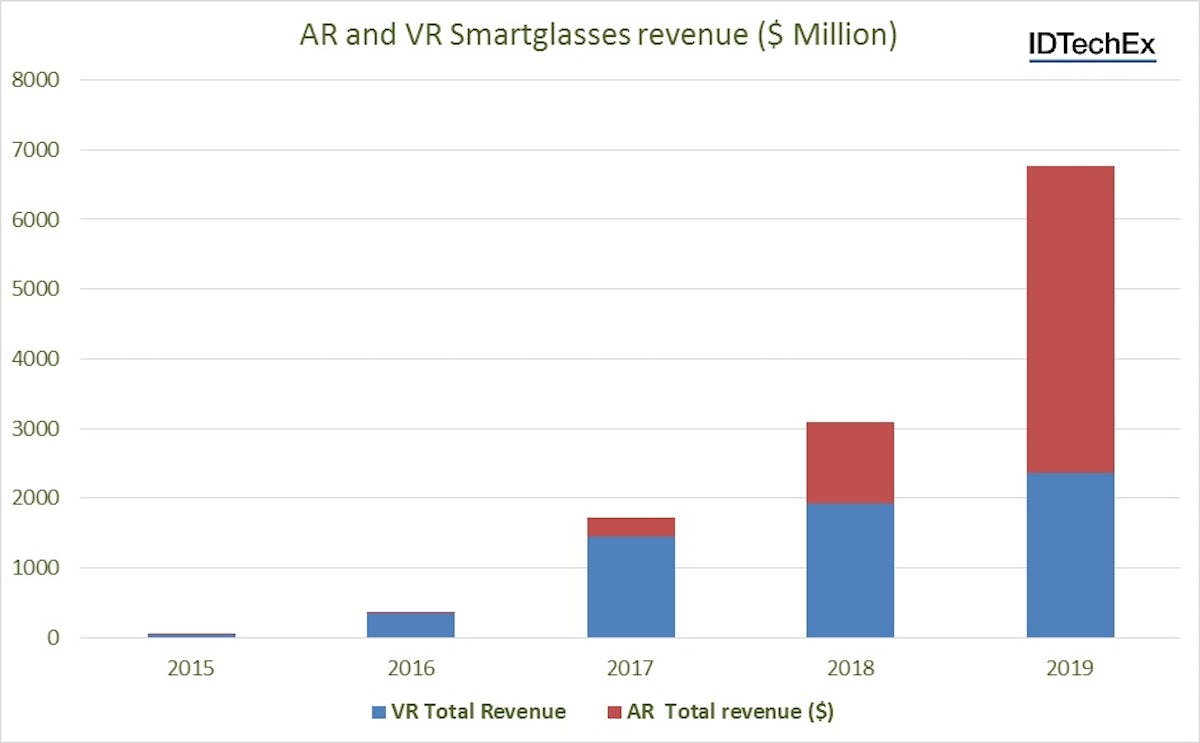