IDTechEx is currently in Japan, researching its event Printed Electronics Asia 2008, to be held on October 7-8 in Tokyo. In the second part of this article, Raghu Das summarises some of his findings as he visits the leading giants there.
The first part of the article can be read here.
Samsung is the world's largest producer of AMOLED panels, launched commercially in Q4 2006 and in the Japanese market in March 2007 via cellphone displays as pictured.
Samsung has announced that it will launch an AMOLED TV shortly. Samsung uses a slightly different front plane structure than Sony OLED displays - it uses a White OLED (WOLED) uniform layer then a RGB colour filter on top, which it claims allows brighter displays. 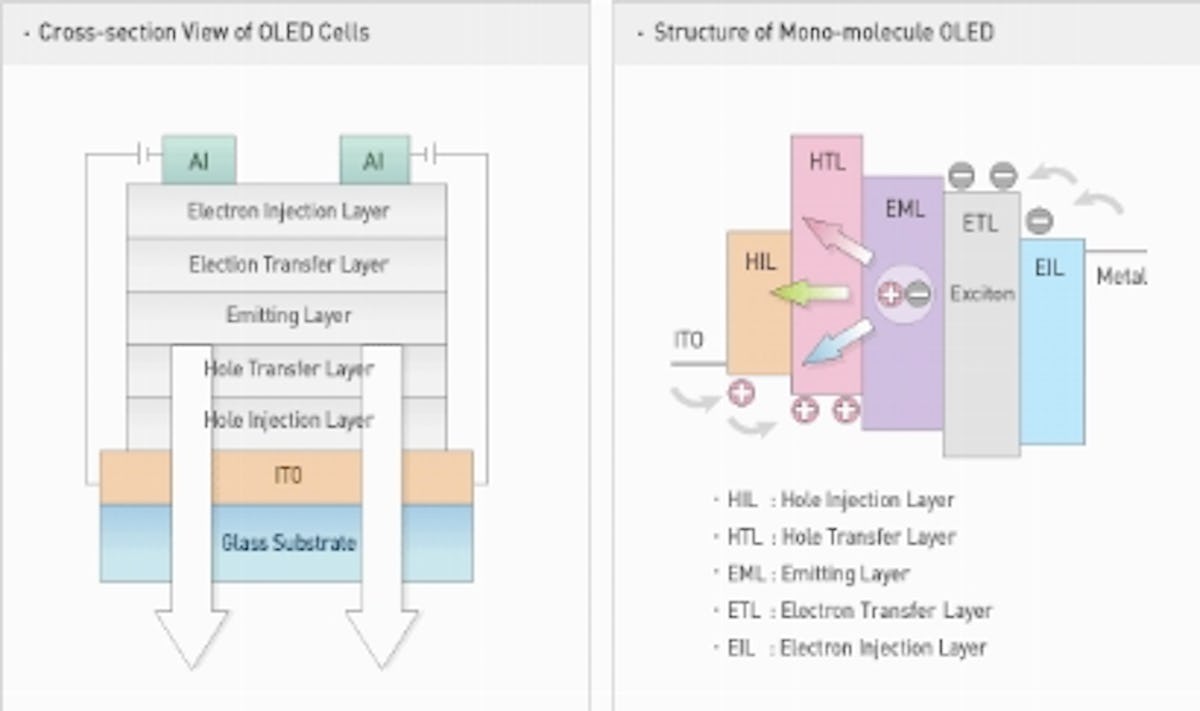 Source: Samsung
So what of polymer OLEDs which can be solution processed i.e. printed? Companies we spoke to felt this was still a few years away before they would appear in volume as AMOLED high end displays, saying that solution processed OLEDs are not as good quality as LCD or small molecule AMOLED yet.
Japanese giant Sumitomo issued a press released last year giving its intent to manufacture OLED TVs and other high end displays by 2009. Since then it has acquired CDT but it has not yet made further announcements about its strategy or products - watch this space.
Even further away is using organic transistor drivers for OLED displays where the two layers currently interact with each other which are problematic.

Two material suppliers we spoke to who sell materials for commercial AMOLED displays told us that currently the materials are about 10% of the cost of the display. Manufacturing is about 50% with margin, transport, packaging etc the rest. The manufacturing cost is expected to significantly decrease as yield improves and equipment is depreciated.
While AMOLED display panels compete to some extent with LCD panels, manufacturers are keen not to erode the prices as LCDs have seen due to fierce competition.
Below we list a timeline of company announcements covering OLED displays in East Asia:
2007
July - LG Electronics moves into AMOLED mass production
September - Sony shows Flexible OLEDs at the IDTechEx Printed Electronics Asia 2008, event
October - Seiko Epson starts to make OLED panels (8" to 21")
October - Samsung claims 21" monitors in 2009 and OLED lighting coming 'soon'
November - The Sony XEL-1 (11"), the world's first OLED TV, sold in Japan
December - Samsung aims to have 14" OLED panels in 2008 and 40" OLED TVs in 2010
2008
January - Sony sold 1,300 units of its XEL-1 in one day
January - Panasonic says no OLED TV till 2012-2014
March - Sony to spend 200M$ on OLED production technology
To learn more don't miss the IDTechEx Printed Electronics Asia event to be held in Tokyo on October 8-9. This is the only event where you can meet the leaders in East Asia. Click on the link for more details and to register.