ITO alternative leaders will emerge despite the pending consolidation

At IDTechEx we have been closely following and analysing the transparent conductive film market for the past five years. To this end, we interviewed more than 40 innovators, suppliers and end-users, organised and attended many conferences around the world, developed a detailed and constantly updated forecast datasheet, and advised our clients globally either through consulting or subscriptions.
We have cultivated strong relationship with key industry players, allowing us unprecedented insight into this market, and our close engagement with users and investors means that we are familiar with prevalent market questions. The new IDTechEx Research report Transparent Conductive Films (TCF) 2015-2025: Forecasts, Markets, Technologies is the distilled and processed result of our continuous endeavours.

The transparent conductive film (TCF) market will reach US$1.2bn in 2025 at the film level (ITO-on-glass, LCD and OLED displays are excluded).
ITO films will continue their dominance, but ITO alternatives will reach a combined market value of $430m in 2025. This market will be very unevenly spread between different ITO alternative technologies with silver nanowires and metal mesh taking a lion's share ($317m).
Touch-related applications currently dominate the sales of TCF films, although the end markets are beginning to change. Currently, the share of non-touch markets is <<5%, but we expect it to reach a substantial 17% in 2025.
These emerging applications include smart windows, OLED lighting, emerging photovoltaics, reflective displays, and more. They, together with larger-sized or flexible touch screens, will shape the requirements landscape of this sector.

Strong trends have long undermined the dominance of the incumbent, the ITO films. Most notable are trends towards lower sheet resistance, increased flexibility and reduced cost.
These trends continuously push ITO films towards or even beyond its performance limit, thus triggering the proliferation of ITO alternative (substitute) technologies and suppliers.
The incumbents have however responded using a two-pronged strategy: (1) doubling the production capacity worldwide and (2) slashing prices at the expense of profit margins. The former strategy ensures that there no longer exists a tight supply-demand relationship, making this once again a strong buyers' market. The latter strategy ensures that incumbents don't lose a client solely on price. Indeed, they lower their prices piecemeal every time an alternative is to close a deal. 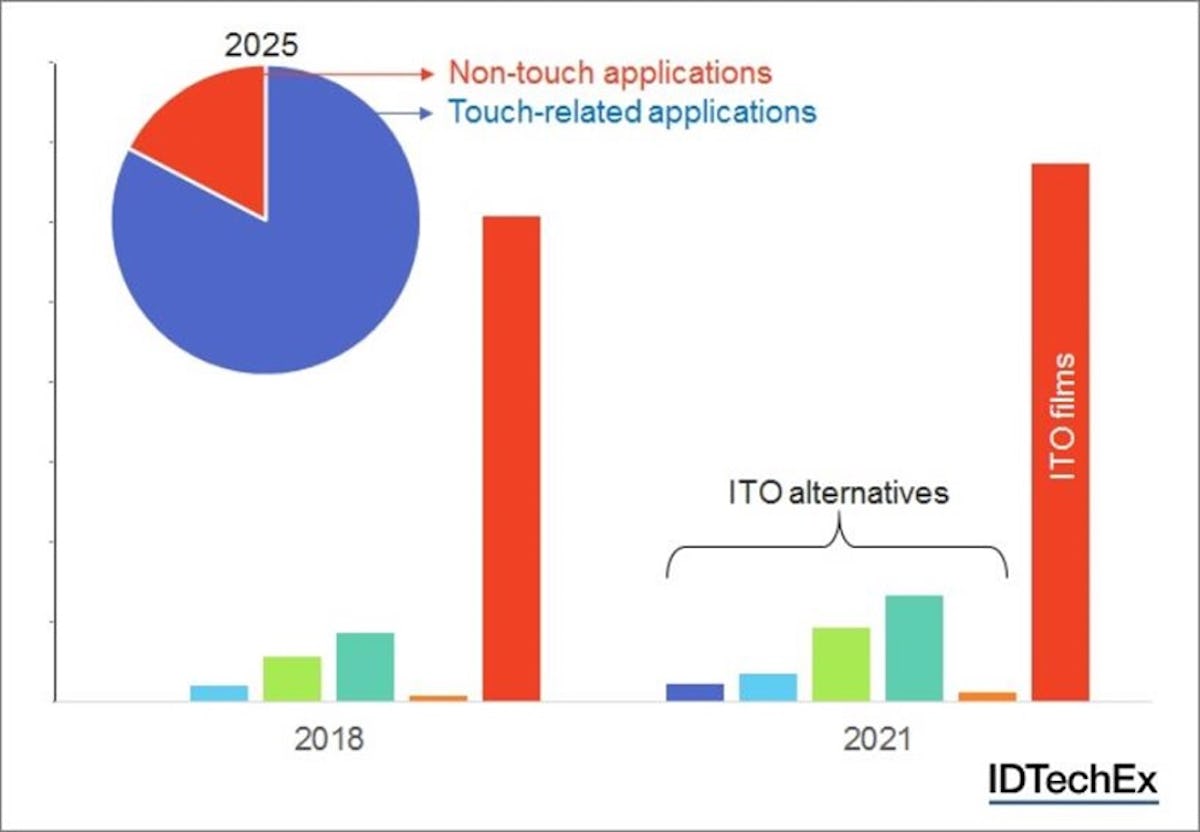 Fig 1. The market for ITO and ITO alternatives in 2018 and 2021. Inset: the portion of touch vs. non-touch applications for TCF films. Source: IDTechEx Report www.IDTechEx.com/tcf

Take off or fizzle out?

These are classic symptoms of a market characterized by a strong threat of substitutes. Here, the end customer is happy but the ITO alternative suppliers face make-or-break years, whilst ITO suppliers (incumbents) are now engaged in a low-margin game of share protection. The market conditions were made more challenging because growth in emerging sectors in which ITO alternatives commanded a clear performance advantage undershot expectations.
We anticipate that these market forces will trigger a consolidation phase in the industry during which ITO alternative leaders will emerge, whilst many poorly-funded and poorly-differentiated suppliers will disappear.
At the same time, we believe that the value proposition for leading ITO alternative technologies remains compelling. They will become a market reality although their journey will be slow because ITO films remain good enough for most existing applications.

The performance bar has been raised

Silver nanowires and metal mesh offer a lower sheet resistance than both ITO and other alternatives without significantly compromising optical quality. Their pricing strategy continues to be based on undercutting ITO to maintain a more-for-less value proposition, although this is becoming increasingly challenging.
In fact, they have increased the performance bar so high that the likes of carbon nanotubes and graphene will be blocked out of the main markets and be pushed towards niche use cases. This suggests that developers of these technologies need to be imaginative again and build on their stronger differentiators such as stretchability, thermoformability, etc. This change of focus is already underway but will come too late for some.
The battle between metal mesh suppliers will be fought on narrowing the linewidth and improving throughput and yield (biggest cost unknown/driver). Amongst silver nanowire suppliers, haze was a point of contention, but now attention is focused on innovation at the formulation level. Here, the first mover advantage will also matter whilst the IP landscape is now no longer white, which further prevents access to new comers.
The next phase of innovation will focus on more hybrid systems and disruptive ways of patterning. Being just a little bit better or a little bit cheaper than the guy next door will no longer cut it.

What does this report offer?