Electricity from sun and heat - printing the new photovoltaics

Solar cells are needed on everything from clothing to packaging, toys, spaceships, consumer goods, medical testers, skin patches and tools. Mostly, they must be thin and flexible, lightweight, environmental and low in cost - even disposable in many cases.
Optical transparency would prevent them from defacing items - higher efficiency and working from heat as well as light are sought. Working well in real world conditions of reflected or low level light would help. In other words, a multi-faceted $100 billion market is emerging that will consist of very different requirements but most of them can never be met by today's opaque, expensive, crystalline or amorphous silicon in its heavy, thick glass encapsulation and limited module area. A much better route is printing, at least to the extent of reel to reel production on low cost substrates and increasingly by ink jet like processes and other techniques of the traditional printing industry which is already developing printed transistors, batteries and other devices that will sometimes be printed on this "printed" photovoltaic film.
Little wonder, then, that the world's largest conference on printed electronics had many presentations on photovoltaics and many more on appropriate production machinery. At Printed Electronics Europe staged by analysts IDTechEx in Dresden April 8-9, Nanosolar described building factories to print Copper Indium Gallium diSelenide photovoltaics reel to reel in Germany and the USA this year and it promised "unprecedented cost efficiency and scaleability" and "near 100% materials utilisation" using nanoparticle dispersions deposited at high speed on low cost metal foil.
The work of G24 Innovations already printing Dye Sensitised Solar Cells DSSC in the UK by an ink jet like process was mentioned and Optomec described its acoustically constrained aerosol spraying process for photovoltaics that can even pattern on edges. Heliatek presented its ambitious new organic PV venture supported by giants BASF and Robert Bosch, which will bring reel to reel vacuum deposition of organic PV to the market with high performance organics containing C60 buckyballs in pin tandem cells, the trial modules being an appropriate green in color as shown above.
Konarka, with its joint ventures in Japan and Germany, research in Austria and the USA, spoke on "Printed Photovoltaics on the Way Towards Commercialisation". The CEA in France described its breakthroughs in research in this area, notably thin film devices with organic electronics as a complementary technology. Its design of a benchmark cell for all organic photovoltaics is shown below. 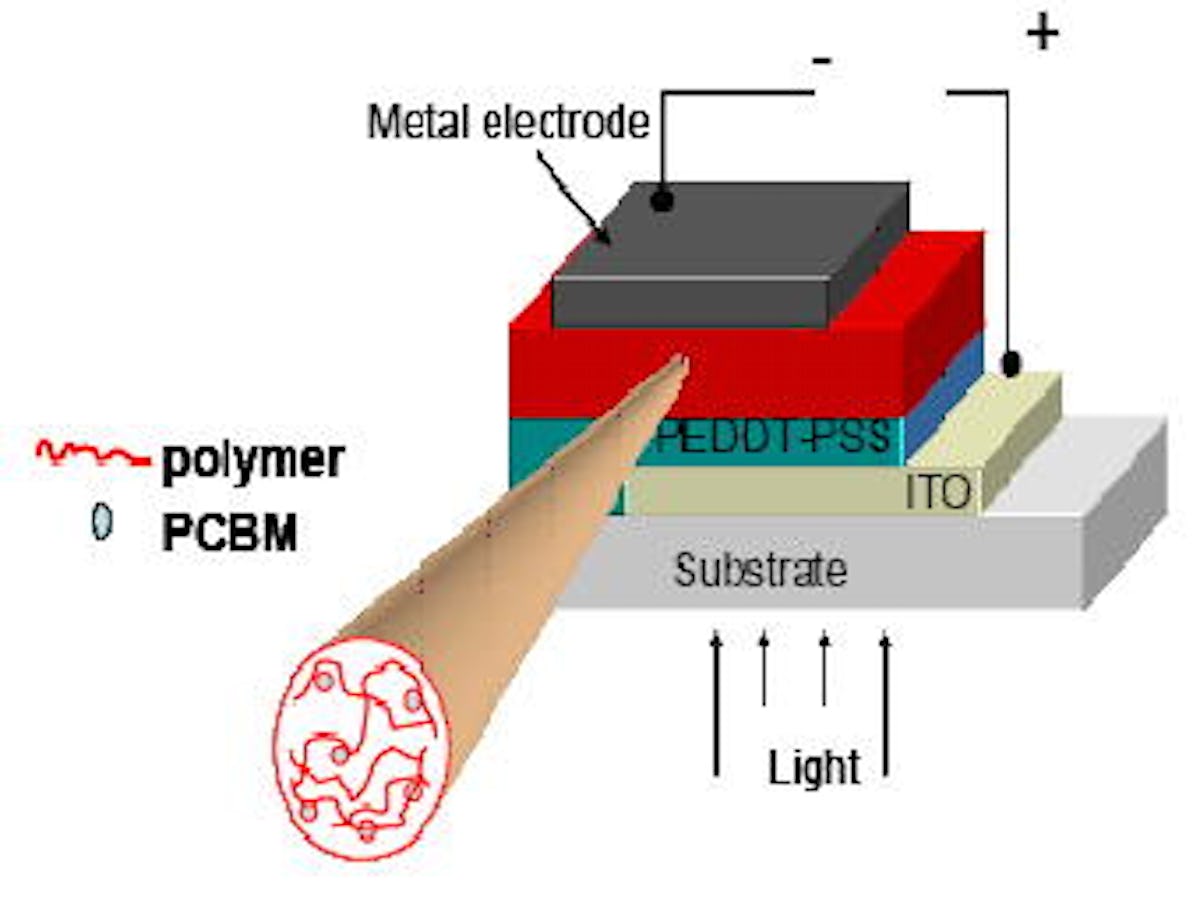 Source: CEA Liten
Several organisations now demonstrate around 5% efficiency with organic PV, near where applications that prioritise cost over footprint can kick in. Spectral efficiency can be better than silicon. Indeed, CEA projected continuing 0.5% annual improvement in best recorded organic efficiency and Heliatek's objective is to overcome the "one euro per peak watt barrier" with 7-10% efficiency and very low costs. RWE projects the following. 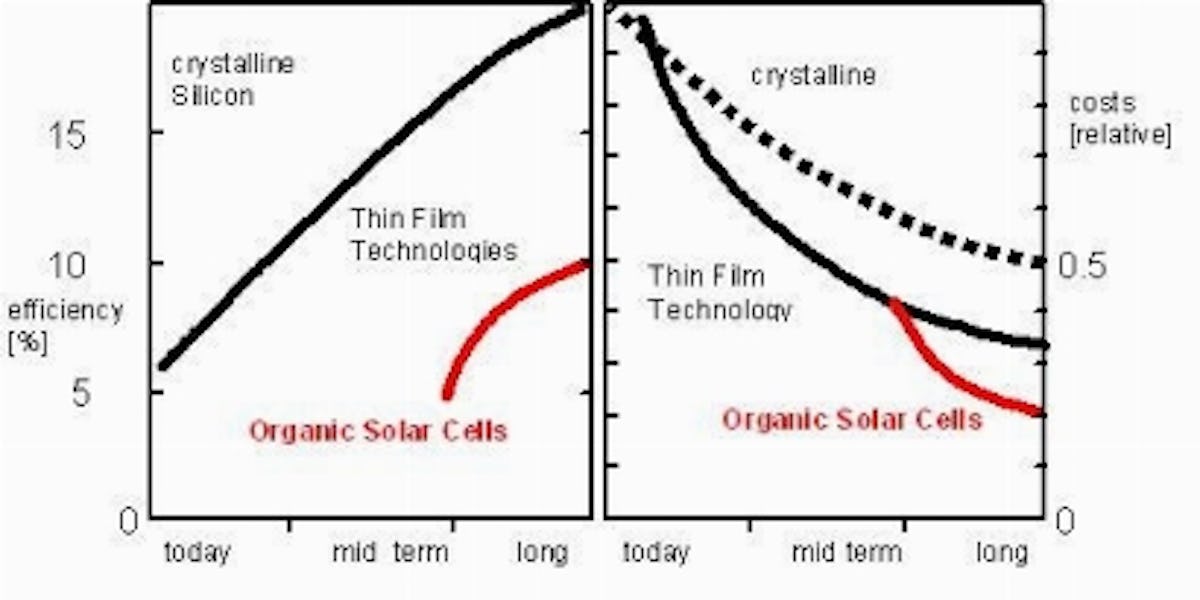 Source: RWE
DuPont spoke about its photovoltaic inks, the University of Augsberg about challenges of material scarcity in some cases and analysts IDTechEx projected the markets for the next twenty years. There was a Masterclass on "Photovoltaics - New Markets". Clearly things are on the move.
The first focussed, major conference on the new photovoltaics
Reflecting the interests of this huge new industry, IDTechEx will now stage a conference Photovoltaics beyond Conventional Silicon in Denver Colorado 17-18 June. It will be unencumbered by tedious presentations on the old photovoltaics and there will be unusually comprehensive coverage of what comes next. It will explore organic and inorganic, flexible and often printed photovoltaics.
Here is solar innovation beyond conventional silicon, often with inks, including silicon nanoparticle, carbon nanotube and quantum dot inks. No matter if it employs chemical vapor deposition or other non-printing technology, if it is providing many of the benefits that the new markets demand that conventional silicon can never provide, then it will be covered.
There will be optional masterclasses and visits to the world leading facilities in the area. IDTechEx will fly in the best speakers from all over the world to this two day event with optional linked events before and after. See Photovoltaics Beyond Conventional Silicon.
Also read Printed and Thin Film Photovoltaics and Batteries.
Conference proceedings for Printed Electronics Europe 2008 can be purchased online.