Solicore has developed a unique Polymer Matrix Electrolyte (PME) which allows batteries to be ultra-thin, very flexible, environmentally friendly and extremely safe. These features are now available in Solicore's Flexion line of lithium polymer batteries. This high conductivity electrolyte also serves as the separator in the Flexion thin film flexible batteries. Because the batteries contain no volatile electrolytes, they are completely safe, says the company, and there is no need for added electronic protection circuitry in your products. Among the other features:
Solicore produces the solid-state electrolyte at its state-of-the-art manufacturing facility located in Lakeland, Florida. Powered cards are commercialized with long-term partner SmartDisplayer. "Our electronic paper display modules are used by the world's leading manufacturers of powered display cards. Solicore's ultra-thin, flexible Flexion batteries have been uniquely able to meet our customers' needs by providing the option to create and maintain the featherweight powered solutions they envisioned," says SmartDisplayer CEO George Ou.
"Internationally, powered display cards have become one of Solicore's core areas of concentration in the embedded powered solutions market," says Solicore CEO David Corey. "SmartDisplayer has fueled the advancement of powered card technology, further expanding the demand for Solicore's Flexion batteries."
Already a supplier of power solutions for European smart card and bankcard manufacturers, Solicore is now partnering with Ineltro which allows the company to penetrate the RFID and medical markets in Europe.
"One of our clients came to us requesting the Flexion batteries for an RFID application," says Thomas Bollhalder, product manager for batteries at Ineltro. "Flexion batteries' unique flexibility and ultra-thin shape make it the ideal complement to our product portfolio. We are extremely excited to be able to distribute Solicore's products and look forward to a long partnership."
Other news in 2008 has been Innovative Card Technologies, Inc. (NASDAQ: INVC), developer of the ICT DisplayCard for e-banking, e-commerce and data access authentication partnering with Solicore in a multi-year purchase agreement where Innovative Card Technologies has agreed to purchase several million of Solicore's patented ultra-thin Flexion® batteries to be used in the ICT DisplayCard.
In Japan, AID has recently been made a partner. "Our clients are always striving to enhance miniaturization and looking for ways to make their products smaller and more convenient; however, they have been confined due to the limitations in the available power solutions. We receive numerous requests for thin film batteries for use in powered card applications, but we didn't have a supplier that made one," says AID President Tomo Wakabayashi. "Solicore's ultra-thin, flexible Flexion batteries met the needs of our clients and provided the perfect complement to our existing battery portfolio."
An alternative to Lithium polymer batteries is lithium ion batteries and CEA Liten in France has a flexible thin film version that is flexographically printed in its laboratories. It was described in the recent IDTechEx conference Printed Electronics Europe in Dresden. The ink formulation is based on a new binder to permit efficient patterned electrodes to be printed whether by flexo or screen. 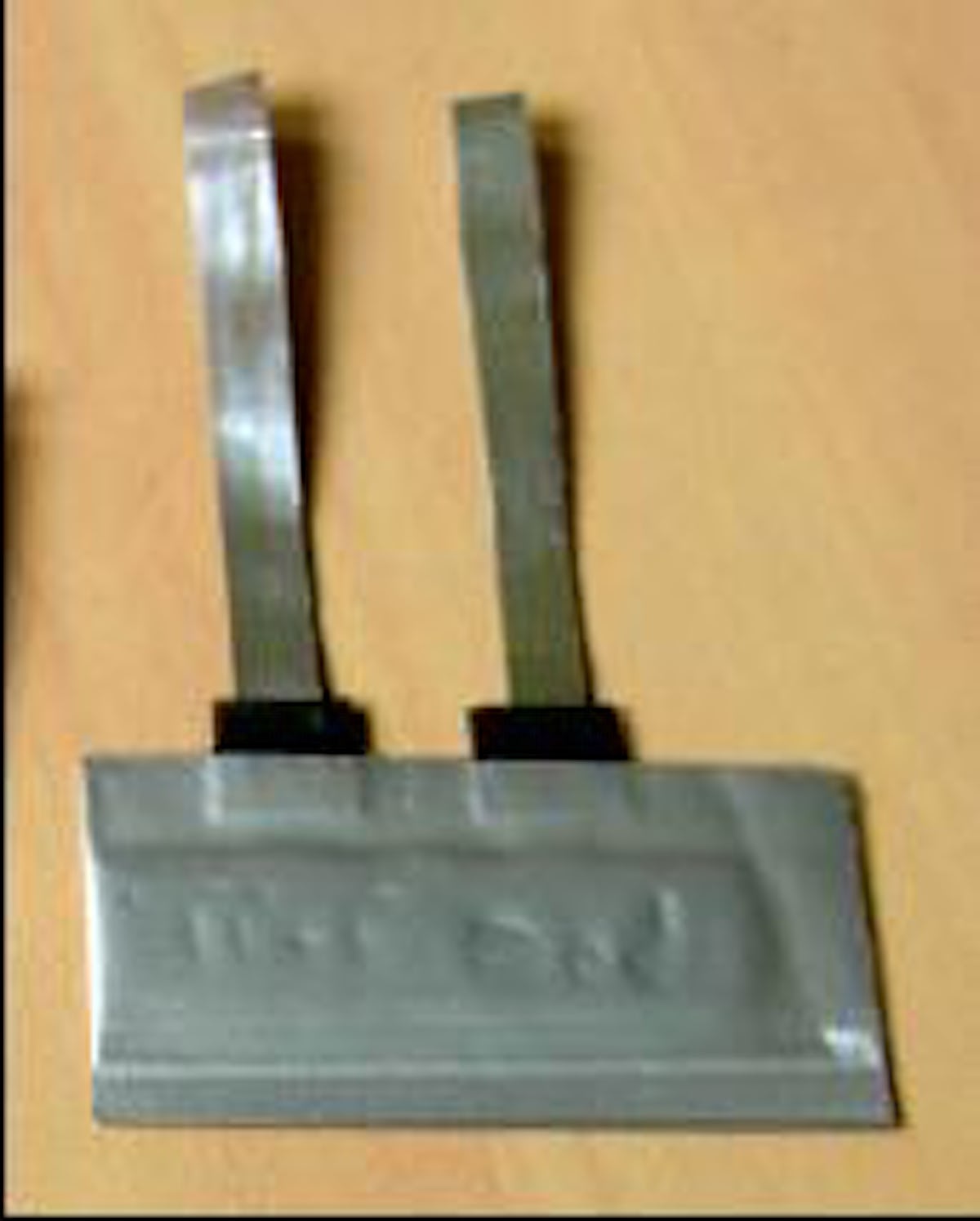 Its specification is:
Power sources, rechargeable in 3 min (LiCoO2 & Li4Ti5O12)
Capacity 5 mAh but adjustable, safe
Thickness < 0.4 mm (Weight < 1g , Volume 0.2 cm3)
Potential applications: active smart cards, bank, telecom...
Lithium ion batteries are also seen as the next generation of batteries for pure and hybrid electric vehicles. Here the technologies are rather different but the huge development budgets may benefit thin film lithium battery technology in due course. The New Scientist has offered the following information.
Large lithium ion batteries have a short life partly because the cathode, which is usually made from layers of lithium cobalt dioxide, wears out quickly. When the battery is being charged, positively charged lithium ions migrate from the cathode across a separator screen into the porous graphite anode, which becomes replete with lithium atoms.
Power is delivered when the lithium atoms feed electrons via the graphite electrode into the external circuit. Lithium ions then leave the anode and migrate back into the cathode where they are absorbed. Repeated gain and loss of lithium ions causes a continual expansion and contraction that eventually degrades the cathodes layers. There is build up of impurities that further reduce the cathodes ability to retain lithium ions. The cathode degrades after only a year or two of regular use. If stressed it can also overheat releasing volatile chemicals and leading to short circuits that can cause a spectacular electrical fire.
A123, a company in Watertown Massachusetts, USA, has found a way to make the cathode more durable, using a material called lithium iron phosphate in place of the delicate lithium cobalt dioxide. A123's lithium iron phosphate cathode has a birdcage-like nanostructure that allows lithium ions to enter and exit without causing damaging expansion and contraction.
"Mother Nature was kind" says Bart Riley, A123's chief technical officer. "The crystal structure of the cathode is very similar in the charged and discharged state." This means it can survive about 10 times as many charges and discharges says Ric Fulop of A123. A123's batteries store twice the power of NiMH cells of the same size. While that's not as much as a standard lithium ion battery, the risk of conflagration is far lower. "The're very powerful little batteries," says David Swan, a consultant in rechargeable battery technology at DHS Engineering in Lawrencetown, Nova Scotia, Canada. "They seem to work very well."
A group led by Yiying Wu at Ohio State University in Columbus has developed a novel anode made from nanoscopic wires of cobalt oxide. With much larger surface area than a flat substrate, lithium ions can flow in and out more easily, Wu says. This could increase both a battery's capacity and its peak power. "It should be interesting for practical applications for hybrid vehicles," Wu says. "The key thing for hybrids is high performance and high current." His nanowire array can achieve both.
Yi Cui of Stanford University uses nanoscale silicon wires instead of graphite. He has made an anode that holds 10 times as many lithium ions as an equivalent graphite one. Diffusion of lithium ions into and out of the silicons's crystalline structure causes it to expand and contract with each cycle but this is only a problem with a flat silicon anode. Silicon nanowires grown like grass on the anodes's surface, thicken as they absorb lithium ions, and slim down when they leave, but because the wires are so small the stress is not great enough to do any damage.
"We are using a a similar nanowire idea for the cathode" says team member Candace Chan.
"Every improvement counts" says Fulop. "The anode also affects the systems's power and lifespan. Everybody is trying to improve both components."
See Nature Nanotechnology vol 3 p31.
If you missed Printed Electronics Europe 2008 you can purchase the proceedings on line or attend Printed Electronics USA 2008.
Also read Printed and Thin Film Photovoltaics and Batteries.

The Rise of the Carbon Nanotube Battery
What Does 2023 Hold for Printed/Flexible Electronics?
Materials Informatics: Digital Transformation Comes to Materials R&D
IDTechEx Investigates Building the House of the Future