Metamaterials: Printing the cloak of invisibility

Physicists no longer say that the invisibility cloak of Harry Potter, the vanishing car of James Bond or the Invisible Man are an impossibility. It may be possible to make things invisible by putting a thin layer of a specially patterned material in the way. Appropriately made, these materials with repeated three dimensional structures less than the wavelength of the radiation used will break the traditional laws of optics and magnetics because they employ quantum effects. For example, if you look at a beam of light shone towards you through a sheet of glass, it has bent to the right as shown below in blue. These materials obeying the conventional laws of optics are called Right Hand Materials RHM. With the new stuff shown below in green, light, or other electromagnetic radiation, would bend to the left. With an appropriate construction, it would not get through at all. 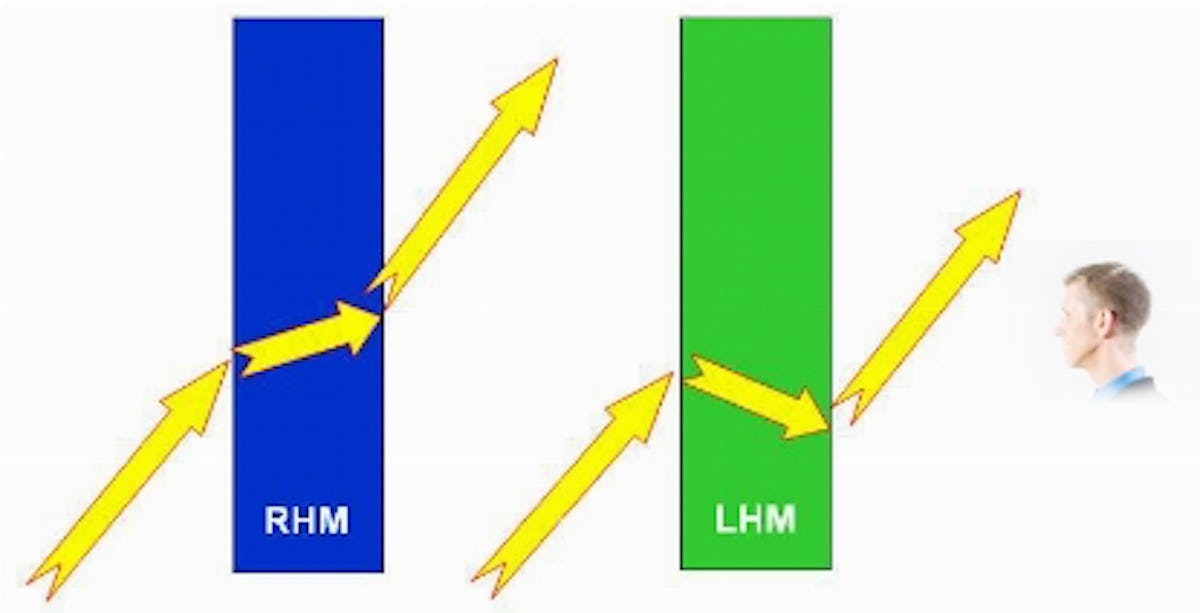 The new structured materials are called Left Hand Metamaterials LHM, first proposed by Russian physicist Victor Veselago in 1968. Nowadays, the term "metamaterial" is typically confined to a structured material with several contrarian properties, notably abnormal bending of radiation caused by material with both negative permeability and permittivity (dielectric constant) resulting in negative refractive index. Professor John Pendry at London's Imperial College pioneered working metamaterials and he has been invited to talk on this opportunity for printed electronics at the forthcoming IDTechEx event Printed Electronics USA in San Jose California. Researchers now develop them in Canada, the USA, Switzerland, the UK, Germany and East Asia.
How to make metamaterials
An appropriate array of conducting microwires gives negative effective permittivity and an appropriate array of very small split ring resonators give effective negative permeability and the two have been combined in one material to give negative refractive index. A split ring resonator is simply an open single coil of conductor giving inductance with capacitance at the gap, so the incoming radiation causes resonance. It is an LC tuned circuit. For X-band - around 10 GHz - the SRRs and wires are arranged into a two-dimensional structure with a 5mm lattice parameter. 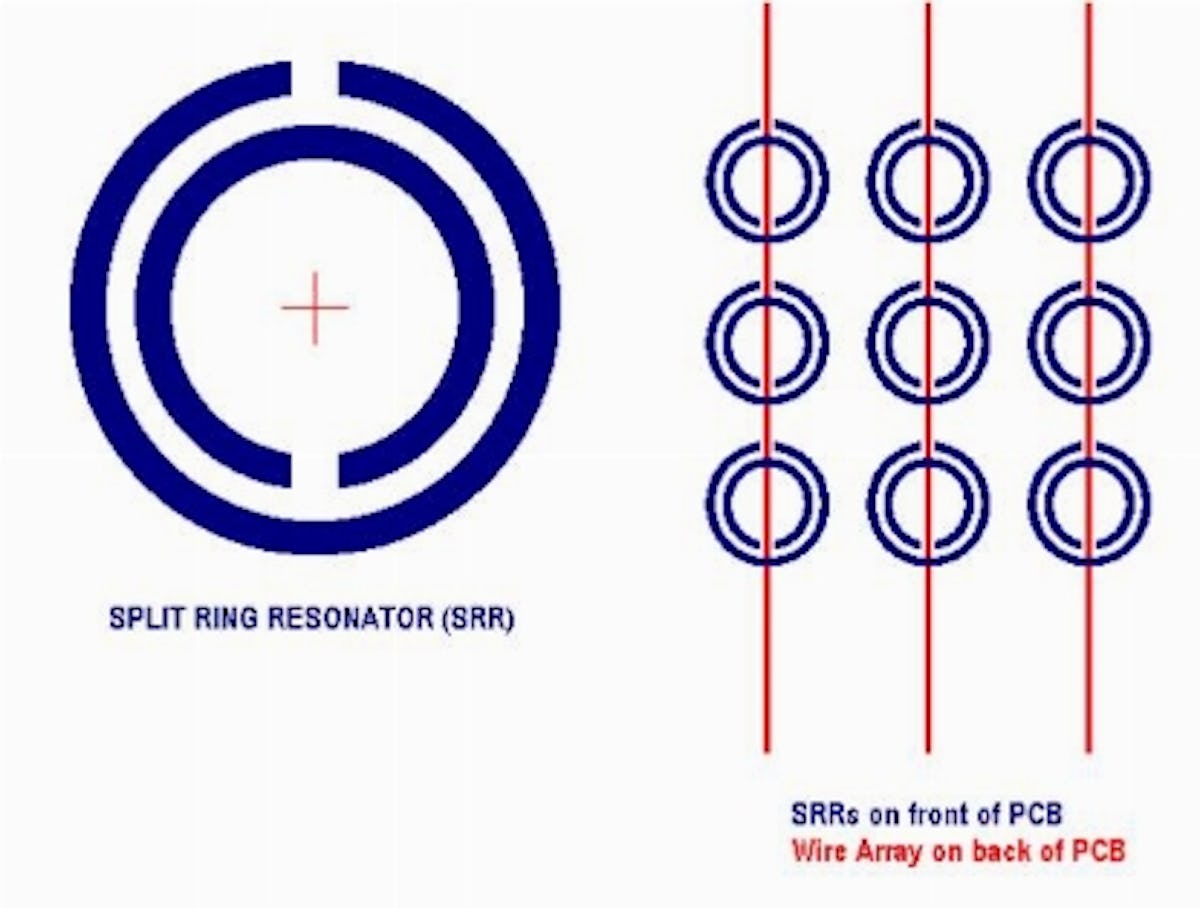 Source Duke University
Combining the wires and the split rings can give a negative refractive index at some frequency ranges, most of the work being at microwave frequencies so far because much smaller structures are needed at optical wavelengths.
Surreal world
It is a world of "Alice Through the Looking Glass" with inverse Snell's law, convergent lenses becoming divergent and vice versa, Doppler shift of electromagnetic radiation (like an ambulance seeming to make lower and lower notes as it speeds past you) is reversed. However, the effect can depend on the angle of incidence of the radiation. Tuning can be achieved by size and shape of resonators and their closeness.
Invisibility cloaks
Invisibility cloaks were only a theoretical possibility until recently but the world's first cloaking demonstration has now bent microwaves around a 110 cubic centimeter enclosure, effectively hiding it from detection. The cloak neither reflected nor cast a shadow. Scientists can pattern split-ring resonators to create "designer" metamaterials. Bending light is theoretically possible. Indeed, in 2007, Ames Laboratory of the US Department of Energy and California Institute of Technology Pasadena, working with Karlsruhe University in Germany demonstrated a metamaterial with a negative refractive index to both red and green visible light. It had very fine patterning on both sides of a thin dielectric.
Potential uses
Metamaterial developers reached terahertz performance - between traditional electronics and optics - by creating a magnetic sensor based on split-ring resonators lithographically printed and only 50 microns across. Electronics at terahertz frequencies has been little understood. Here we have wavelengths of about 1 micron to 300 microns (ie 100-GHz and 30-THz) which is too fast for silicon but too slow for optical devices. Some of the Nano ePrint (formerly Plastic ePrint but now adding inorganic device capability) thin film transistors based on GaAs do work at this frequency, however. The search is on for materials that can bridge the terahertz gap between 100 GHz and 30 THz. The terahertz range is promising for automated inspection, zero-visibility navigation, biomedical imaging and security screening applications notably with solid-state sensors that can see through solid objects. Metamaterials are also expected to be used in frequency agile antennas, beam steerers, modulators, band-pass filters, lenses, microwave couplers and antenna radomes and there may be military applications of cloaking.
For more attend Printed Electronics USA 2008.
If you are interested in Photovoltaics then attend Photovoltaics Beyond Conventional Silicon.