OLEDs versus the $100 billion LCD juggernaut

Last week IDTechEx attended the 2008 Society for Information Displays (SID) event in Los Angeles, USA. Over the coming days we will be covering the most significant developments announced at the show and the current trends.
Active Matrix (AM) displays have Thin Film Transistors (TFTs) driving each individual pixel, giving a crisp image with no ghosting. Today almost all AMOLED displays are manufactured on glass substrates using vacuum deposition technologies and multiple mask steps. One message that came across at the event was the slower than anticipated take off of AMOLEDs. The growth rate of AM LCDs has been higher than AMOLEDS, so their market share has actually dropped.
The global market for AM LCD displays has now exceeded $100 billion, thanks recently to the fast growth of TVs being flat panel LCD versions rather than CRT versions, where in 2007 more AM LCD TVs were sold than CRT TVs for the first time. This includes $15 billion spent on displays for cellphones.
In 2011, Paul Semenza, VP of iSuppli who presented at the event, sees that almost 3 billion AM LCD panels will be sold. He felt that current OLEDs are not sufficiently different to be insulated from the price competition with AM LCDs. He explained also that developers of AMOLED displays have found the manufacturing process to be more complex than expected, not just a matter of using existing TFT manufacture capacity. Companies are struggling with manufacturing issues that are delaying volume production and the lowering of device costs. Semeza anticipates that OLEDs will mostly be used for secondary and primary cell phone displays and other small area display applications such as MP3 players. This year, the market size is around $700 million for OLED panels, rising to approximately $3.5 billion in 2012. In 2012, approximately half of that revenue is for TV sets, growing to $1.5 billion in 2013 rapidly from just $150 million in 2011.
In discussions IDTechEx had with vendors, over the last four years AM LCDs have narrowed the performance gap with OLEDs. Norbert Fruehauf, from the University of Stuttgart in Germany, says that LCD makers recognised the weaknesses of the displays and have invested to improve these. Indeed, where OLEDs touted better viewing angles five years ago, LCD versions now have significantly reduced the viewing angle restrictions. OLEDs have better contrast, but many LCD makers sell coated glossy LCD screens giving more vivid colours (but not quite as good as OLED versions). LCD displays are in volume production and now have a huge supply infrastructure. In addition, the cost of LCD panels has fallen sharply over the last few years and more reduction is to come through new manufacturing methods. For example, LG Display is working on printing part of the backplane and filter, and Samsung are also working on this. Fruehauf pointed out that with a $100 billion market behind it and strong infrastructure, companies are able to spend significant amounts of money to tackle the problems.

The problem with the current AMOLED set up, argue many pundits, is the manufacturing process, which today is vacuum deposition processes. Moving to predominately solution based manufacturing i.e. printing, would enable the devices to be much lower in cost. Nobutoshi Asai of Sony Corporation Japan, also said that he felt more companies need to get involved to help ramp up OLED volumes.

One of the most significant announcements at the show was from DuPont, who has developed a solution printed OLED technology using small molecules. Most solution processes use polymers which are easier to print but generally have worse lifetimes and efficiencies. As a result, small molecule OLED materials are used in virtually all commercial AMOLED displays today, but these can not be easily printed so are made using vacuum deposition techniques.
DuPont allows for the printing of small molecule OLED materials, which can be done in atmosphere conditions. They say they use one fifth of the material that current non-printed OLED manufacture processes use. This development has been made by two key process methods - the first is patterning of the substrate such that when ink is printed it is confined to an area and does not spread. This has been tackled by others by using wells which are filled with OLED material, but has the challenge of pixel to pixel uniformity. DuPont instead use continuous nozzle printing, where it is not individual drops being printed like an inkjet printer, but rows are printed at a time using constant extrusion from a nozzle head, which overcomes uniformity issues. The second development is that DuPont pattern the surface with lines to contain the fluid. However, at this stage they would not say if this is an additive process.
DuPont is working with equipment provider DNS to provide complete solutions for companies. The first Gen 4 substrate size printer will be delivered to them within the next month, capable of making 10,000 Gen 4 size OLED panels each month.
Below: A solution processed small molecule AMOLED display from DuPont. 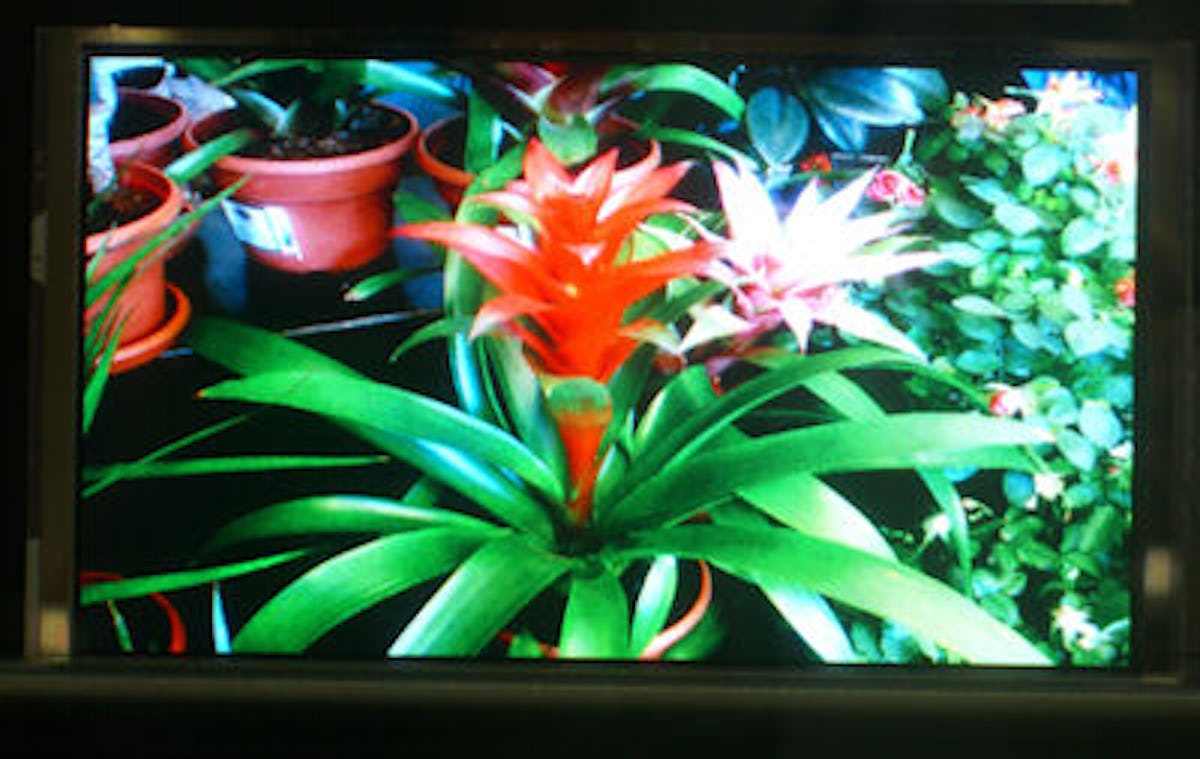 David Fyfe, CEO of CDT, a company working on printing of polymer OLEDs (POLED), said that solution processing is key for OLEDs to become cost competitive with AM LCDs. CDT is predominately working on inkjet printing but licensee Toppan Printing, Japan, are using roll to roll printing and Add-Vision, USA, screen printing. Add-Vision is focusing on low cost displays on flexible/conformal substrates, and has recently raised $6 million from CDT, Toppan Forms and Alps Electric.
CDT is working also on lighting; Fyfe claimed that POLED materials are better for this than small molecule versions. Last year, CDT was bought by Sumitomo, who have decided to potentially become a display manufacturer - or partner with one.

There were a large number of OLED displays previewed, most for demonstration purposes, but showing that this is not a fad and will at some point overtake LCDs. So far, Sony has the only OLED TV product on the market, costing a huge $2500 for an 11" display, which is loss making, but a start to drive adoption. As we have covered earlier in Printed Electronics World, they are investing approximately $200 million this year in AMOLED manufacturing, a start but still far below the level invested in LCD production. Pictures from different vendors are given below of OLED screens, including versions which cab be folded.
Below: An OLED display from Samsung which folds in the middle. More than half of Samsung's stand was previewing OLED displays. 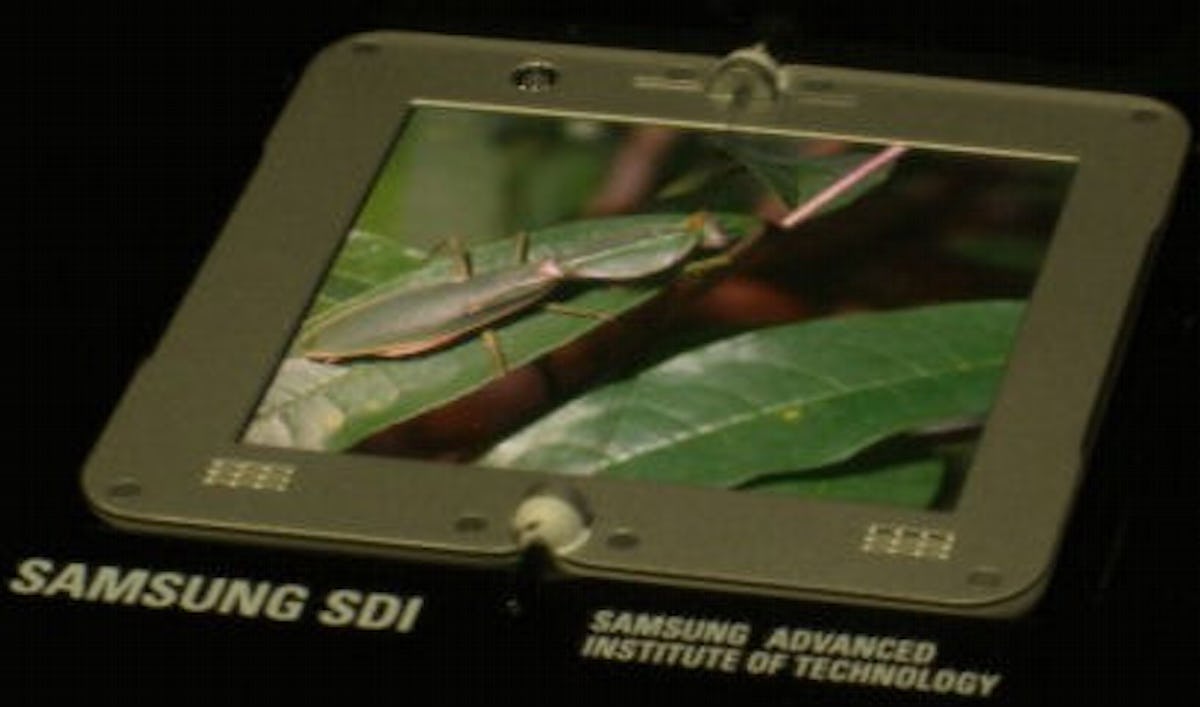 Below: A 4" flexible AM OLED from LG on stainless steel. 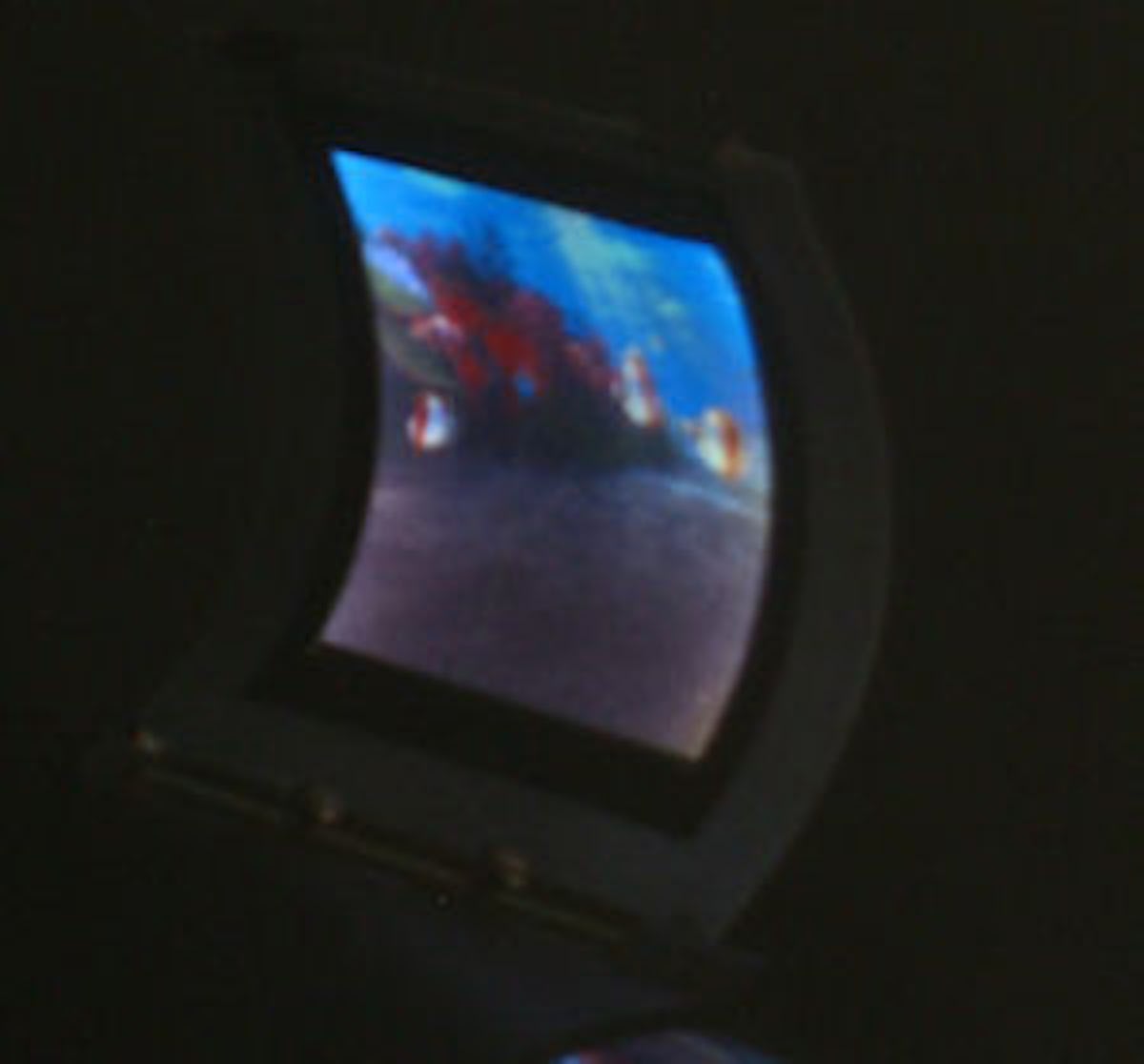