Strain sensors are used for diverse applications, from structural monitoring to healthcare. Most commonly foil strain gauges are employed which are relatively low cost and consist of measuring the resistance change in a metallic foil pattern as it moves with the object it is attached too. Other solutions consist of MEMs or piezoresistive devices. These technologies are used for small strain measurements, typically a few percent strain.
For large areas of strain monitoring, optical sensors are used which can be cast in cement or fixed in an object. Applications include monitoring oil and gas pipelines, for example. These have relatively high cost but can work over larger areas, but again usually monitor strain of a few percent.

But what if you want to measure cycles of strain over 10% or over even over 50%? This is the capability shown by Parker Hannifin's hyper elastic strain sensor. The sensor comprises of a dielectric electroactive polymer which can strain to 100% and do so millions of times. In addition, the sensor is based on a flexible substrate and printed, resulting in an overall device that is soft and flexible and therefore conformal to the object it is being attached to.
The principal of operation is that as the sensor is strained, it thins and expands in area increasing its capacitance which is then measured to ±0.5% accuracy for a given temperature. 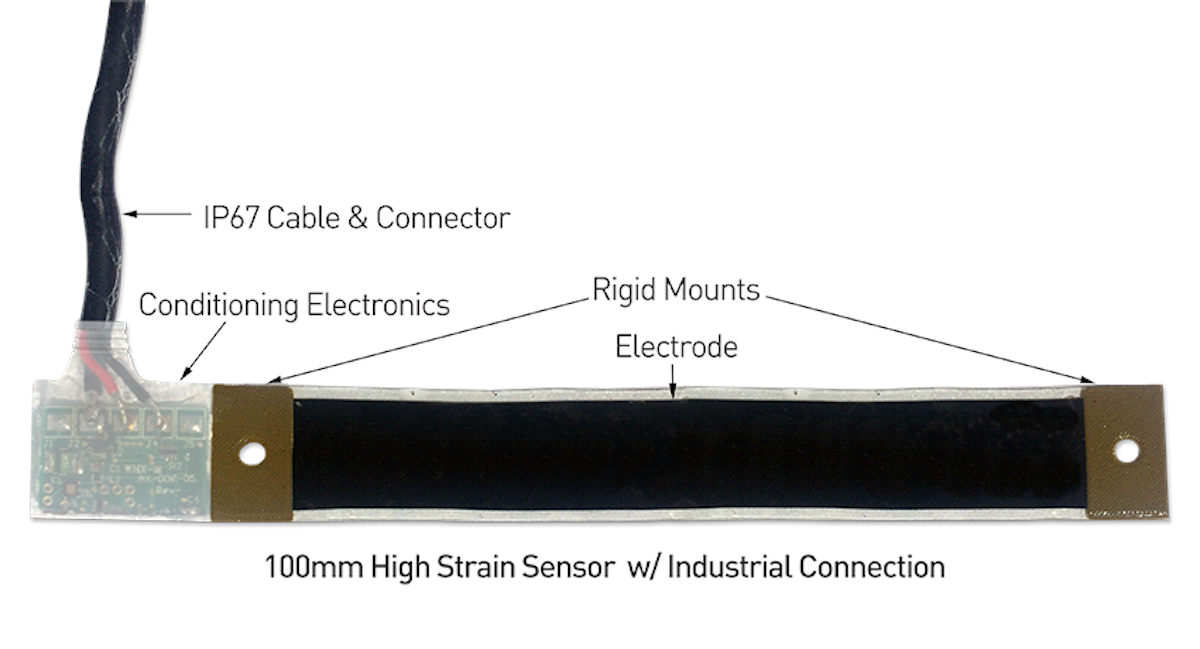 Source: Parker Hannifin
Parker Hannifin, a $13 Billion motion and control technology company, acquired the technology from Bayer Material Science in 2014. The company has been developing the sensor since then, including materials development and in November 2015 won the IDTechEx Award for Best Technical Development: Materials for their development of a stretchable conductor that maintains appropriate conductivity when stretched to 100%.
Watch the presentation of the technology
The company is now scaling the manufacturing of the sensor for commercialization, with sensor kits being well received by many different industries.
IDTechEx see strong opportunities for the sensor not as a replacement to most existing strain gauges but in applications where high strain or sensor conformability are important. Take, for example, wearable electronics, where there is a high degree of stretch around body joints and the sensors can therefore be used in garments as part of medical devices, or in industry where precise high strain measurements can be taken on a range of equipment and infrastructure. The EAP sensor is opening up a whole new range of applications not feasibly addressed before.
For more information about the sensor, see http://promo.parker.com/promotionsite/eap/us/en/home