OLEDs - The future of architectural lighting

Organized by the UKDL Knowledge Transfer Network, and attended by approximately 50 people, this conference was held in the BDP Building in Clerkenwell, London on the 24th of June 2008.
Scott Brown of Cambridge Display Technologies, the license holders for polymer OLEDs, gave an idea in the advantages of OLEDs when compared to the very inefficient incandescent lighting and fluorescent lighting, which faces issues such as short lifetimes when switched on and off and mercury content.
The gap between the better performing small molecule OLEDs (Kodak is the license holder for this technology) and polymer OLEDs is closing and the advantages of the simpler in structure polymer OLEDs are showing through.
According to Scott Brown, GE, a future licensee of CDT's technology is aiming to bring down the cost of OLED lighting to half that of fluorescent lighting and in terms of life times, white OLEDs are now reaching approximately 10,000 (lifetime to half brightness).
OSRAM Opto Semiconductors, licensees of CDT's technology, unveiled recently a revolutionary lighting application based on OLEDs. The limited-edition light, known as "Early Future" and "Flying Future" shine with tiles directly from the OSRAM laboratory and demonstrate the enormous potential of using OLEDs to create future applications with eye-catching illumination and design elements. 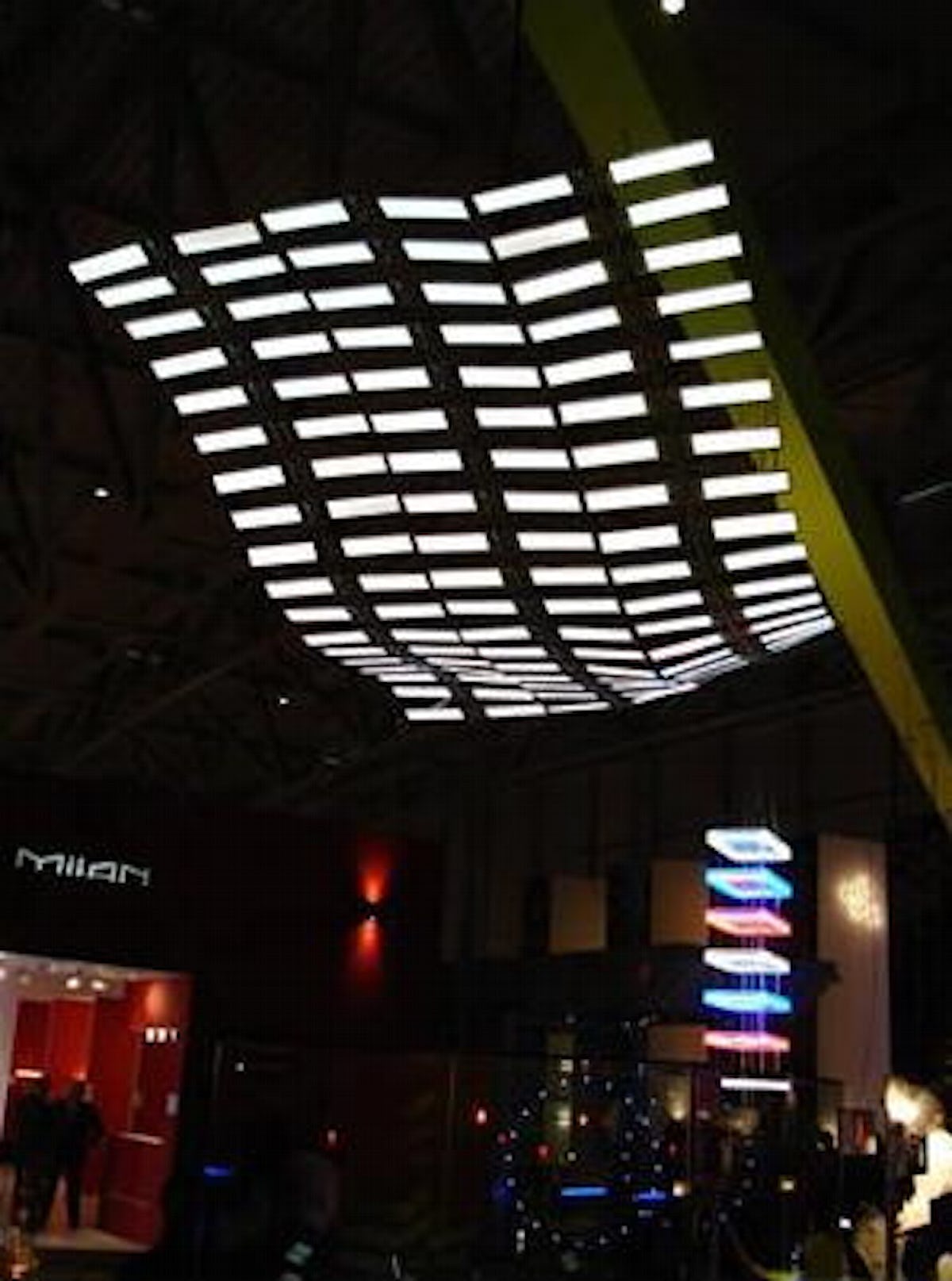 "Flying Future" by Ingo Mauer: A large suspended OLED object that consists of just an airy, bended metal mesh to which about 100 panels are attached, offering the structure a wave-like rhythm. 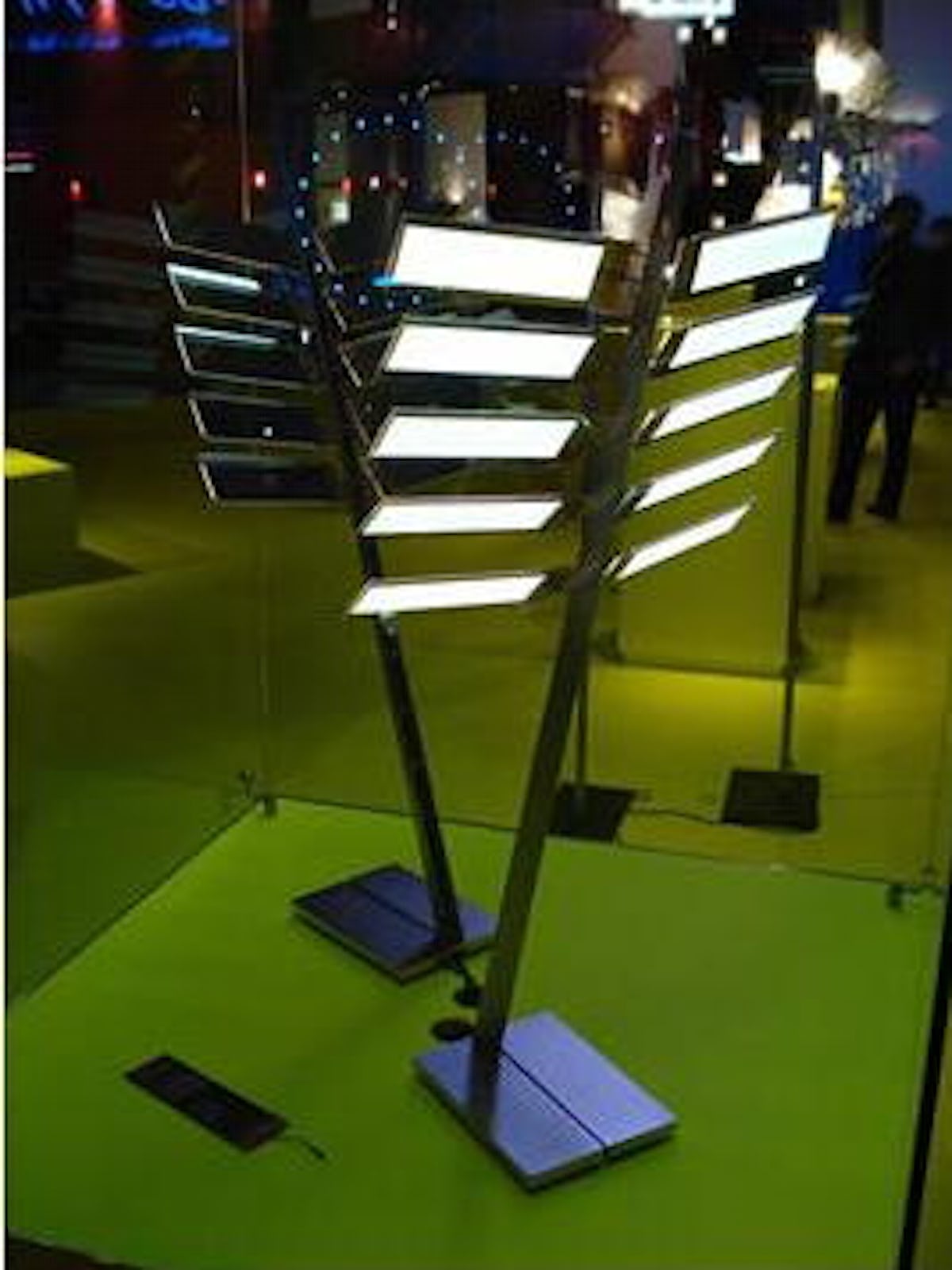 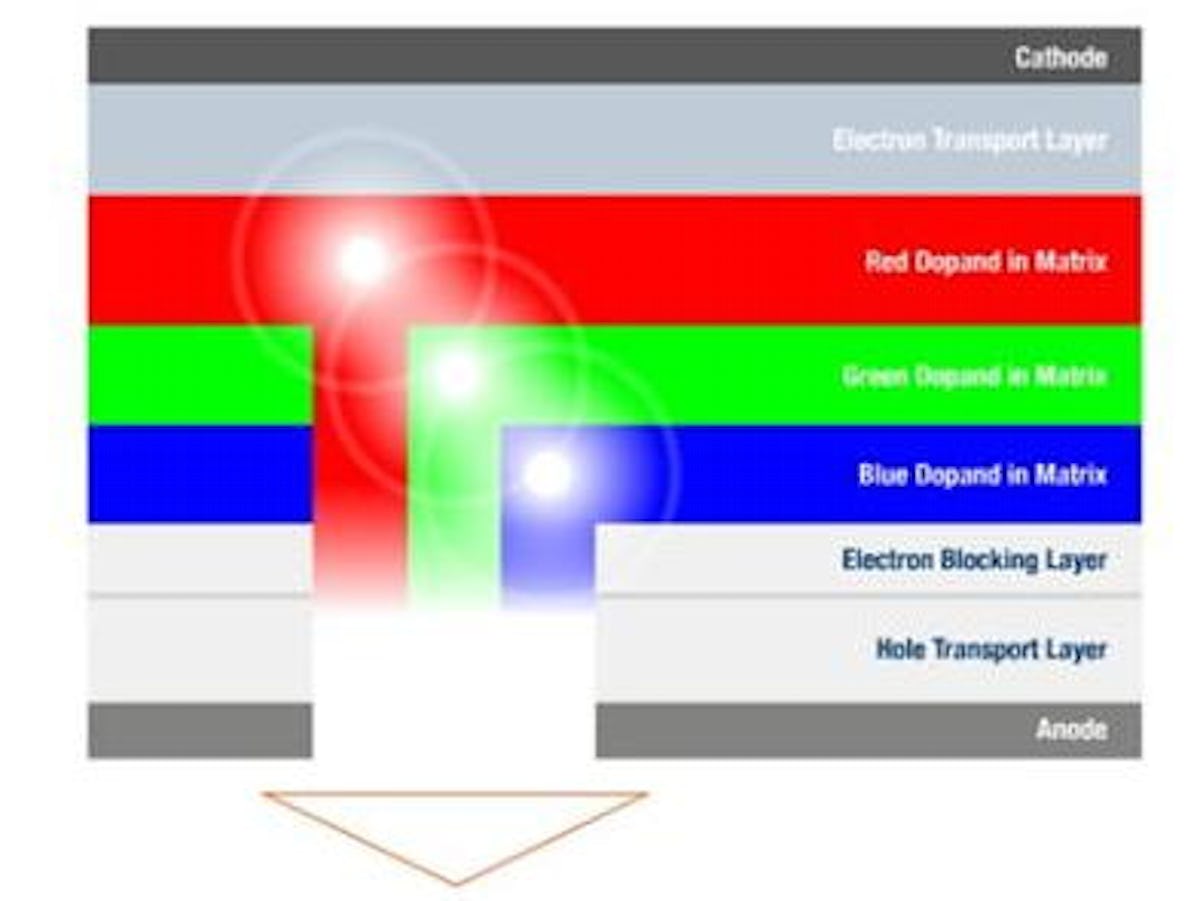 Basic Structure of a white OLED
Andy Monkman of Durham University gave further insight into the technology behind small molecule OLED lighting, with top performances reaching 105 lumens/ watt for a white OLED, 1000 Lumens/m2 and 5,000 hours lifetime to half brightness (Universal Display Corporation). He also commented on the potential that organic photovoltaics have, to be used in conjunction with OLED lighting as the current provided by a PV cell is DC and currently low voltage. OLEDs are also DC driven and only require low voltages so they are ideal applications for use with organic PV cells.
Andrew Evans of Aberystwyth University said that two main challenges that need to be faced are bringing the cost down (at least $13/sq.ft) and increasing the panel size without compromising performance.
Lifetime is another big challenge that OLEDs are faced with, even more so when it comes to their potential of becoming flexible. The permeability of polymers used for encapsulation is not yet reaching the target of 10-6 g/m2.day (AddVision have achieved permeability of 10-3 g/m2.day at the moment that gives a lifetime of approximately 3 months to their devices).
After the technologists, the architectural light designers took over the podium and gave their views on the way OLEDs can be used in their industry.
Kevan Shaw who is directing his own Lighting Design company gave an overview of the things that went wrong with the application of LED lighting in architectural design and ended his presentation with the hopes that OLEDs will not be plagued with similar issues (inconsistency between actual and advertised performance, lack of standard measurements of performance, etc.)
The afternoon session ended with two inspired presentations that displayed the fusion between aesthetics, design and technology, with Douglas James of Mindseye presenting some of the work undertaken by their firm who demonstrated the importance of the ability to integrate lighting into a structure (future flexible OLEDs are ideal candidates for that). Sam Neuman of NDY light gave a presentation into a "futurepossible", describing London and the way it could be in 20 years from now, inspired by technology and electronic and electric products that are currently becoming available, ranging from OLED lighting applications all the way to e-paper flexible displays.
The discussion session that closed the conference highlighted once more, both from the side of the scientists/technologists and from the side of artists/designers the need for these two different fields to "talk and interact" in order to better understand each other's needs and capabilities.
For more information read European projects accelerate OLED technology for mainstream lighting; A major milestone - white OLED technology exceeds 100 lm/W; The OLLA project delivers its final milestone and OLLA final event symposium, Eindhoven 12.8.08.
Also attend Printed Electronics USA 2008.