As analysts IDTechEx is in the fortunate position to see the constant developments in materials and processes in printed electronics. Occasionally we see breakthroughs which significantly overcome barriers to adoption. Here is an example of that. IDTechEx recently visited Novacentrix in Austin, Texas, to learn of their room temperature cure process.
The biggest opportunity for printed electronic devices is when devices can be made on flexible, cheap substrates. However, this is not currently associated with having the best performance devices, which are usually made on more expensive substrates which can withstand the cure temperatures involved to make the optimal device.
For example, metal flake conductors have been used on substrates such as glass or polyimide which can tolerate the high temperatures required to remove the polymer solution and leave just the metal conductive trace. Over the last ten years there has been considerable development of the thermal treatment of inks, allowing lower cure temperatures so that cheaper substrates can be used.
Developments have come from companies such as Parelec, who use a conductive solution polymer and NanoMas Technology, which uses genuine nano particles of silver in ink which increases their surface area in the solution, sharply lowering the melting point, in addition to many other companies. The conductivity at lower cure temperatures is adequate for some applications, but is still in the range of 120 to 250 degrees Celsius meaning cheap polyester film and paper cannot be used without warping in the cure ovens. Even at those temperatures, unless the time of exposure is prolonged the conductivity is not good enough for all applications, and so companies are also using other technologies such as electroplating of pure metal to printed "seed" lines, which is a two stage process. The situation is summed up in the following diagram: 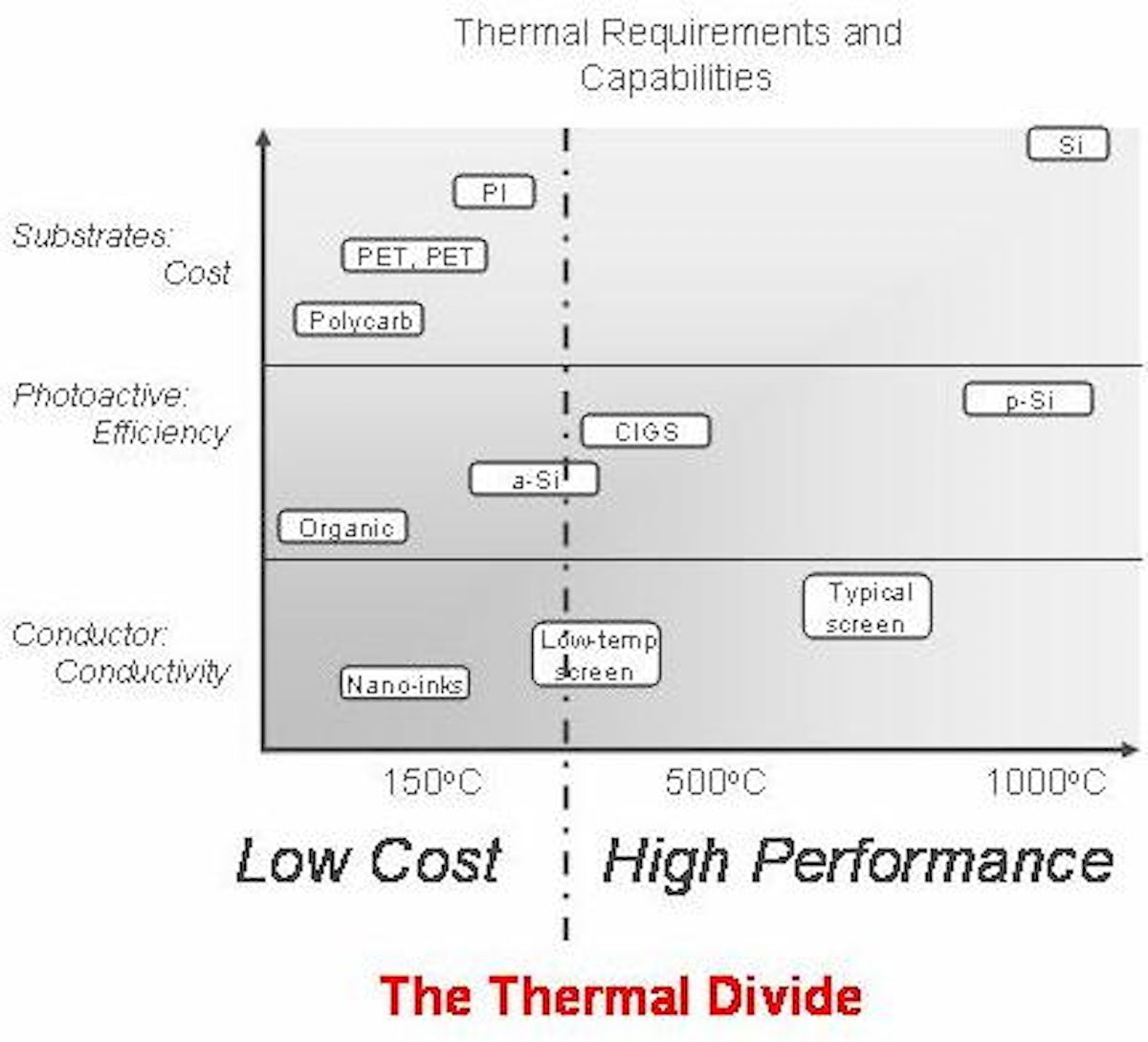 Source: Novacentrix
Novacentrix has developed "PulseForge™", which can cure an inorganic ink at room temperature and atmosphere. It has been tested on conventional metal inks which are rated for much higher temperatures from numerous suppliers. The principle is akin to a microwave oven - where only the food is heated and not the container. PulseForge uses a high powered lamp, which it has developed, to give an intense light flash onto the area requiring curing. The high energy photons remove the unwanted solution material leaving just the metal flake which has been sintered/annealed. The light does not impact the substrate meaning this can be done on paper or other cheap materials. The principle is shown below.

Source: Novacentrix
Raghu Das, IDTechEx, witnessed numerous examples with different samples of conductive ink on paper and plastic substrates. The cure takes a fraction of a second - just a light flash, and the conductivity of the circuit can be varied by varying the intensity of the light. The substrate - even paper - was not effected in any way by the process, there was no substrate heating immediately after the cure. The inks used were off-the-shelf inks available from different vendors, including Novacentrix' own formulations, all of which would require a high temperature oven cure for a prolonged period to achieve the conductivities witnessed by this process, which would have meant they would not have been able to do this on paper or the plastic substrates without damaging them.
When a layer is cured other layers can be printed and cured in the same way without effecting previously cured layers because they become much more reflective after curing and reflect the light. Unlike a cure oven, which is widely used today, energy consumption is less because it is much more targeted.

Source: Novacentrix
The impact of this technology goes beyond conductive circuits. Many companies are working on printed inorganic transistors, photovoltaic cells and other devices, using, for example, metal oxides or silicon nano particles in solution. These usually have much higher mobilities - and therefore faster operation or they are more efficient than organic types - but come with the disadvantage of requiring a high temperature process, limiting them to more expensive substrates (such as needing to withstand at least 350 degrees C or much more). Novacentrix is working with such inks and has demonstrated they can form these on cheap polymer film.
Another advantage of the technology is its applicability to copper inks. Silver based inks are predominately used today in printed electronics because during the cure process the oxide layer that forms is conductive. However, silver is a precious metal and has been getting more expensive recently, even causing some companies who have invested in printing silver based ink for RFID tag antennas to move to foil stamping which is cheaper. The holy grail is a copper based ink, which has been available for some time, but not used because in the cure process the copper oxide layer that forms on the surface is not conductive. This then makes it difficult to achieve a good connection with the other components, and it is so unreliable that silver had been preferred as overall it offers better yield and reliability due to the interconnections involved.
However, the Novacentrix PulseForge cures the copper ink so quickly that it does not have time for an oxide layer to form. This was demonstrated to IDTechEx with several samples including versions which had been exposed to oxygen for six months, all saw a drastic improvement in conductivity.
To learn more, Novacentrix will be at the Intersolar event in San Francisco in July, showing their new PulseForge capable of curing at 50 foot per minute. You can take a sample to their booth at the event and they will cure your sample in front of you.
Later in the year, Novacentrix aims to unveil a 250 foot per minute roll to roll PulseForge machine at the IDTechEx Printed Electronics USA event in San Jose in December.
For more information see www.novacentrix.com