The race is on to commercialize a full-color electronic reader

The race is on to make a full-color electronic reader a reality with a recent entry from researchers at the University of Cincinnati who have collaborated with Sun Chemical, Polymer Vision and Gamma Dynamics.
The reader uses Electrofluidic Display Technology (EFD), which according to the researchers is the first technology to, electrically switch the appearance of pigments in a manner that provides visual brilliance equal to conventional media - providing more than 85% "white state reflectance."
Developer Jason Heikenfeld assistant professor of electrical engineering in UC's College of Engineering says "If you compare this technology to what's been developed previously, there's no comparison - we're ahead by a wide margin in critical categories such as brightness, color saturation and video speed."
He explains the primary advantages as follows:
"The ultimate reflective display would simply place the best colorants used by the printing industry directly beneath the front viewing substrate of a display." He continues, "In our EFD pixels, we are able to hide or reveal colored pigment in a manner that is optically superior to the techniques used in electrowetting, electrophoretic and electrochromic displays." 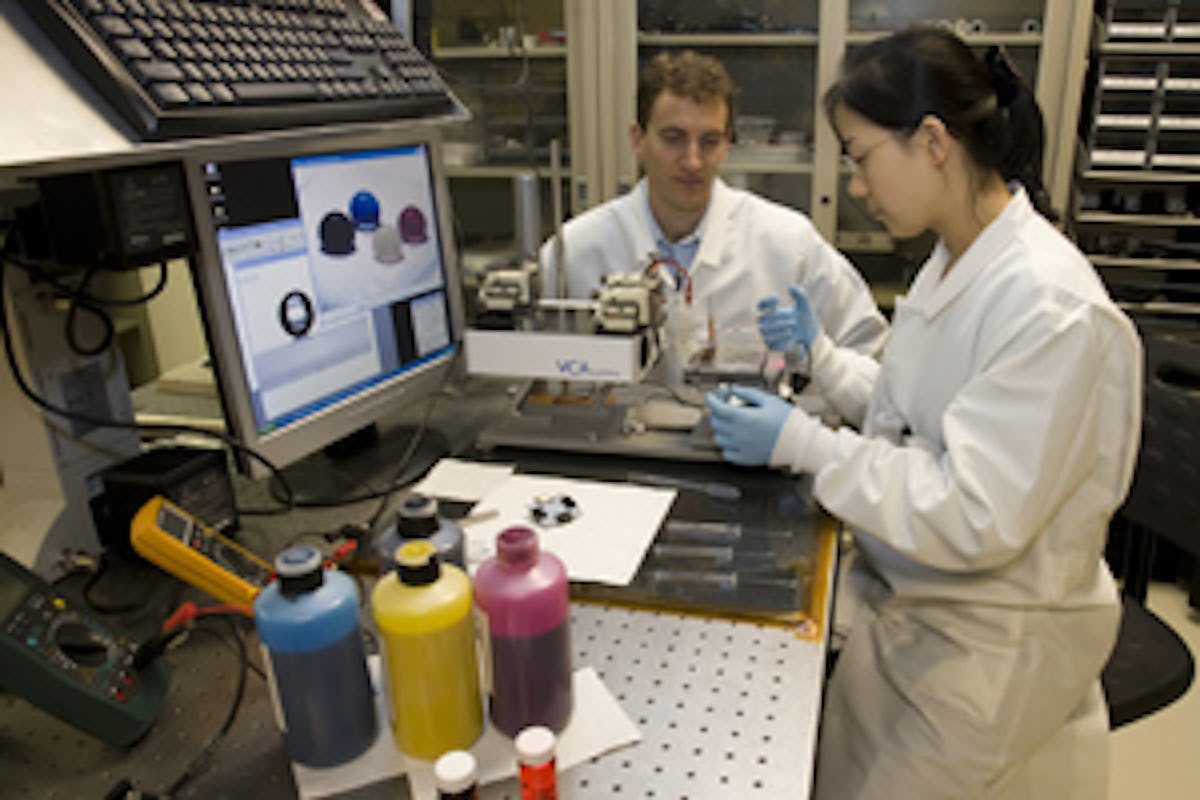 Who are the main players?

There are many other potential players for a color e-reader. Printed Electronics World reported earlier this year details about Fujitsu's color e-reader "FLEPia" which they have been trialing for some time now although nothing seems to be forthcoming. Plastic Logic who plan to launch a black and white version first early next year have plans for a color version although are not stating when. A new Apple device or the Palm Pre is imminent but as their primary function is a mobile phone, the displays are likely to be too small for a prolonged reading experience making them unlikely contenders. Sony has announced that their new device will be wireless but nothing yet about color.
Media mogul Rupert Murdoch, CEO of News Corp reportedly said in an interview last month that, "We're investing in a new device that has a bigger screen, four-color, and you can get everything there." He also recently confirmed, "We will not be sending our content rights to the fine people who created the Kindle. We will control the prices for our content, and we will control the relationship with our customers."
Rival Hearst Corporation who owns a large newspaper chain and big magazine business confirmed last week that they have invested in a separate company that is creating an entire e-reading ecosystem for consumers, featuring newspapers, magazines, books and other content from multiple publishers. They denied a rumor that an agreement had been made with Plastic Logic.

The latest from Amazon - Kindle DX

Apparently, Prime View International (PVI), a Taiwanese company that supplies the displays for the smaller Kindles and Sony readers, has indicated that attempts at creating a color display have been more or less unsatisfactory and will not be sorted until 2010 at least.
Amazon's latest offering "Kindle DX" (pictured below), which does not include a color display, has had scathing reviews. Media perception on the $489 price tag, an increase of $130, is that it is too expensive for the for the extras provided such as a larger 9.7-inch screen, an auto-rotating screen with support for Adobe PDF files and 3.3GB of on board memory capable of storing as many as 3,500 e-Books. 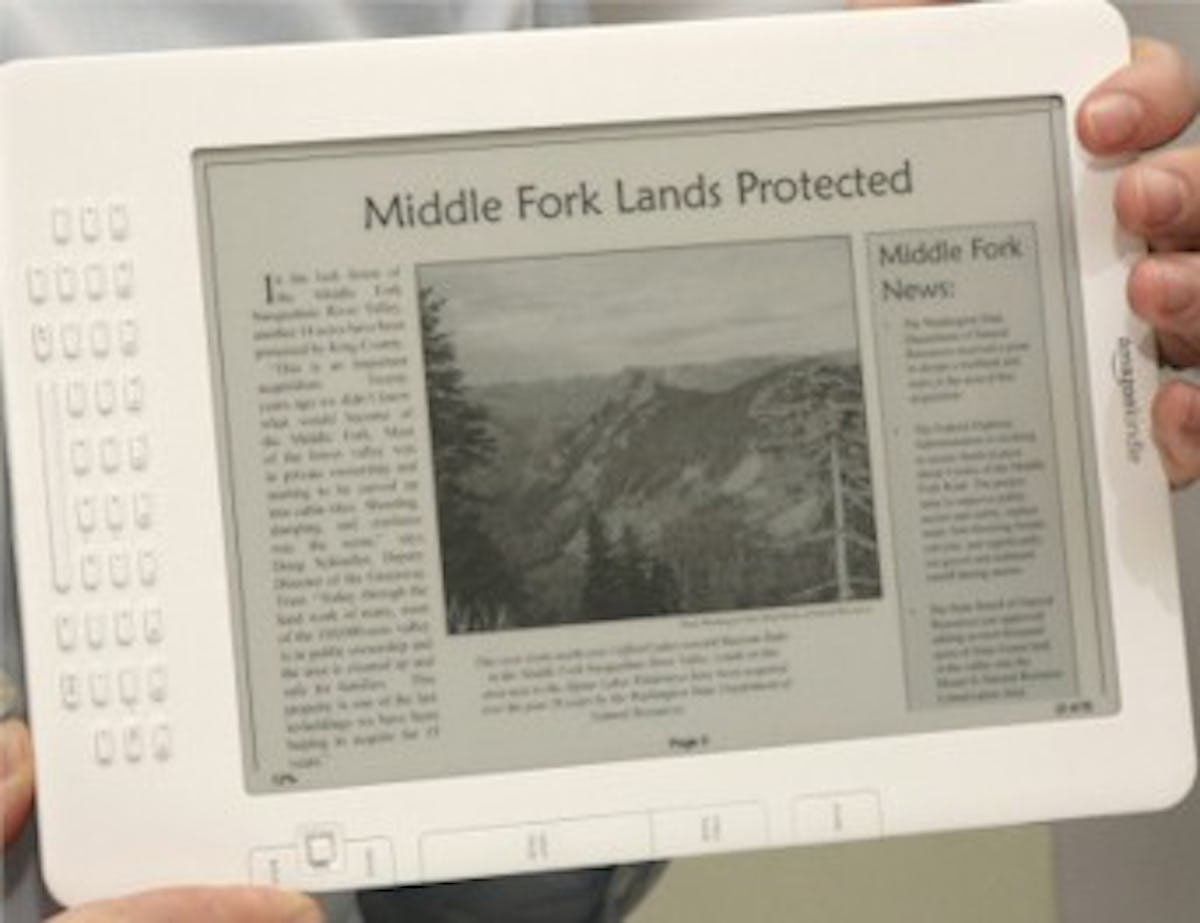 The new device is geared toward readers of personal and professional documents, newspapers, magazines and textbooks.
The company has recently partnered with textbook manufacturers Pearson, Cengage Learning, and Wiley to bring textbooks to the Kindle - which Amazon says make up 60 percent of the textbook market. However, it's going to take a lot to entice students despite the obvious cost benefits of digital textbooks and despite the compatibility with other formats. Unfortunately, Kindles still can't offer EPUB, the Open e-Book Standard format established in 2008 by the International Digital Publishing Forum.
Three newspapers will be testing out the Kindle DX this summer in exchange for future product development help. The publications participating are The New York Times, The Boston Globe (owned, and recently nearly shut down, by the New York Times Company), and The Washington Post. The Guardian is talking to Amazon about a digital version for the Kindle's US and UK versions, but nothing has been agreed yet - said Guardian Media Group Carolyn McCall at the recent World Magazine Congress.
Amazon have 275,000 books available for their e-reader, 45,000 of these have been added in the last three months.
To learn more attend Printed Electronics Asia 2009 or Printed Electronics USA 2009.
Also read Displays and Lighting: OLED, e-paper, electroluminescent and beyond and World's largest collection of digital content planned for new eReader.