Summaries from the AIMCAL and IPC events

Last week IDTechEx presented at two events in the US on printed electronics. Here we bring you the highlights of some of the discussions and presentations that took place.

Dr Yan from GE spoke of their work on roll to roll OLED lighting manufacture. As one of the World's largest light bulb suppliers the company is obviously very interested in new lighting products.
Novel features of OLEDs over other products

Source: GE
From 2003 to 2007 GE worked on installing and developing a pre pilot production line for OLED lighting. Part of the work was funded by NIST. The first outputs in 2007 had fairly high defects - with a 65% yield or so. Since that time, GE has been debugging and engineering to now achieve yields between 90-95% today. Dr Yan explained the four approaches to creating OLED lighting as follows: 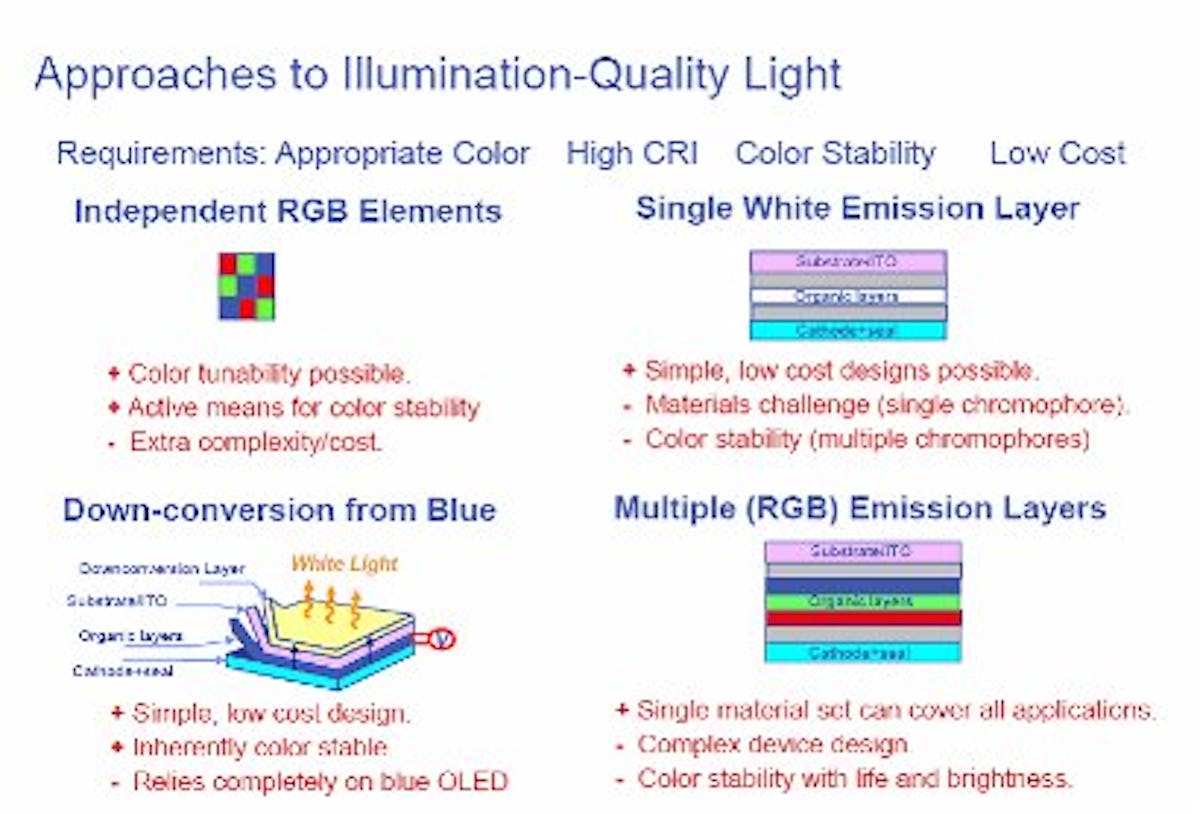 Source: GE
One of the biggest issues GE is tackling is the flexible barrier layer to protect the OLED devices. GE has developed an "Ultra High Barrier" (UHB) by plasma enhanced chemical vapour deposition. The performance that has been achieved is low 10-5g/m2/day, with good transparency and adhesion.
Transparency of GE's UHB film versus wavelength 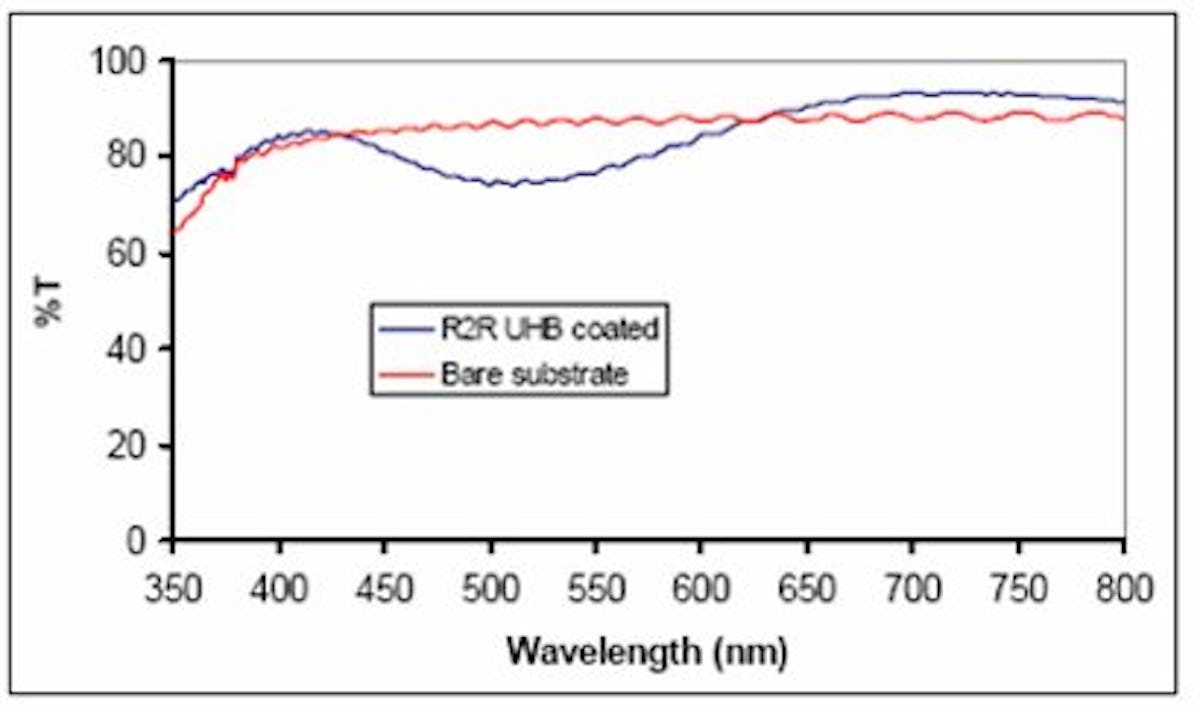 Source: GE
Dr Yan concluded that roll-to-roll organic/flexible electronics is real and OLED lighting is getting closer. IDTechEx has certainly noted an increased level of activity in OLED lighting. While OLED lighting is some 15 times more expensive than conventional lighting, compared to LED lighting which is just 3 times more expensive today, those developing OLEDs feel that in time the cost can be less than LEDs thanks to roll to roll manufacture and potentially cheaper materials being employed.
IDTechEx believe that it may take five to ten years to become more cost effective due to the challenges that still have to be tackled, but before then it will be used in niche high value products and some companies such as Lumniotec and Novaled have already demonstrated concept products. However, in the mean time LEDs for lighting is growing rapidly. Organizations such as ITRI in Taiwan are exploring making LED lighting in a roll to roll process.

Stan Farnsworth of NovaCentrix discussed their new copper oxide ink which Printed Electronics World covered recently - view the article here. Their PulseForge tool cures the ink at room temperature and high speed. The cured copper ink then has a spray coating to prevent it from oxidizing in use and also to make the printed metal more robust under flexing.
Comparison of a conventional oven cure versus PulseForge cure for copper ink

Source: NovaCentrix
For more, hear from NovaCentrix and GE at Printed Electronics USA in San Jose, CA on Dec 2-3.

Michael Wobser of Eastman Kodak explained that Kodak has been using PEDOT on products since 2002 as antistatic coatings on Kodak Motion Picture Film.
For six years they have been developing the film as a low cost ITO alternative, with the aim of achieving surface resistivity of 100-300 Ohms/sq and more than 85% transparency. Their product, launched in spring this year, is the HCF 350 film, a cross section is shown below. 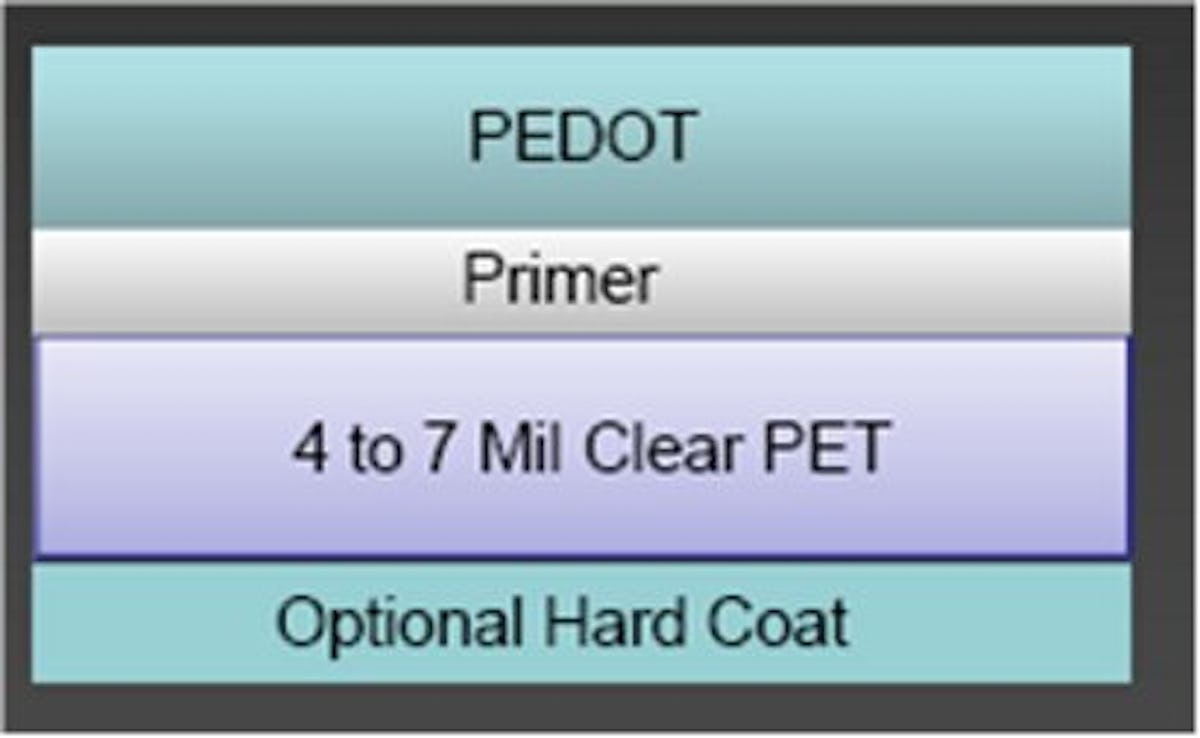 Source: Kodak
He says that despite PEDOT being available for some time from several companies, sales have been slow. Many customers are happy with ITO. Wobser sees the opportunity for their PEDOT formulation in applications where customers seek cheaper alternatives than ITO and where a more resistive film is acceptable. Wobser sees the opportunity for PEDOT in the display industry as follows. 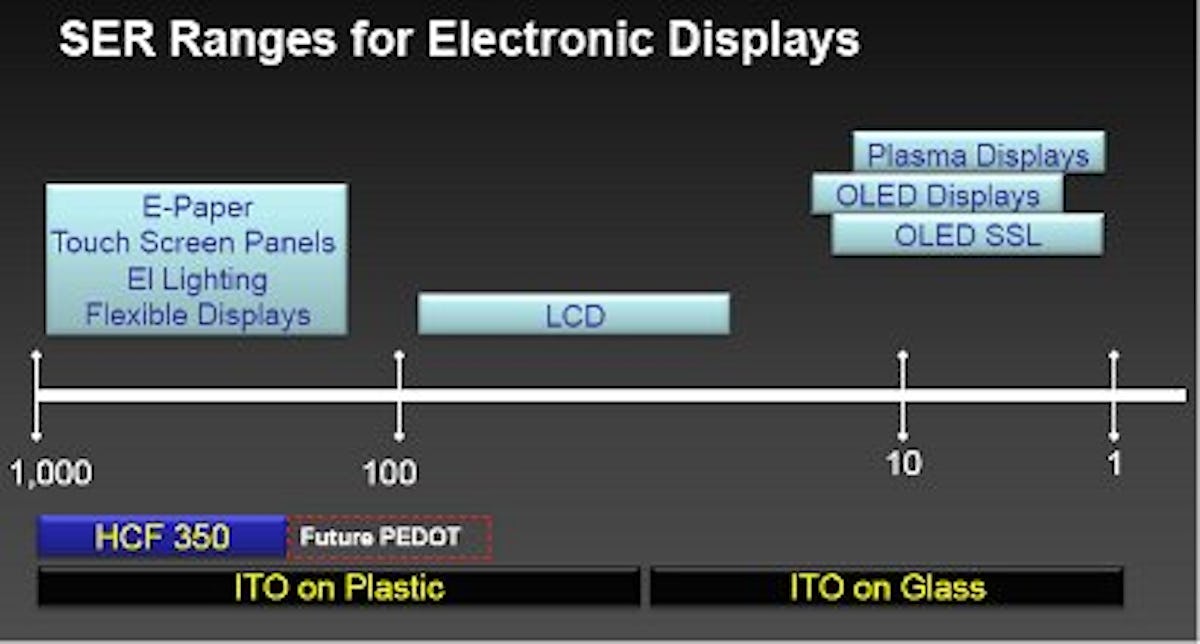 Source: Kodak
He summarized the properties of HCF 350 as follows, compared to ITO. 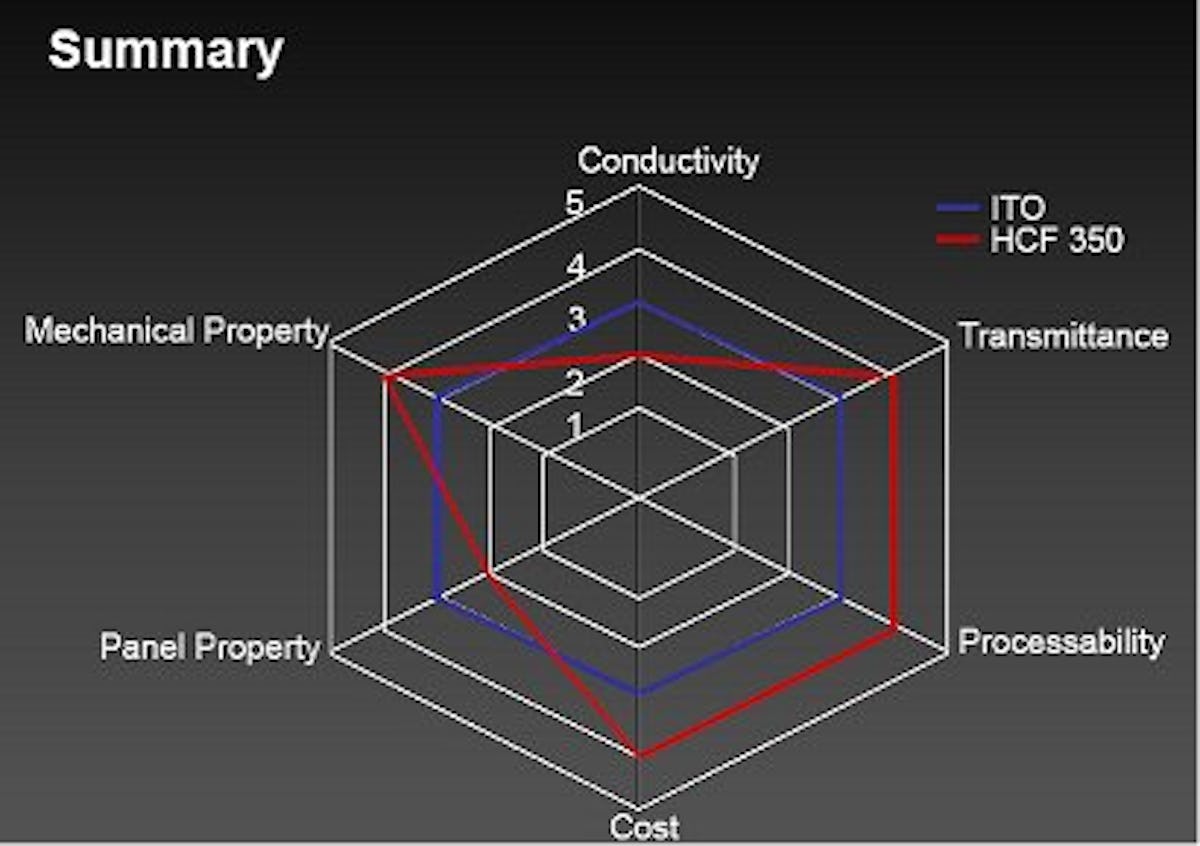 Paula Mints of Navigant Consulting gave an excellent presentation on the latest photovoltaic market trends. So far, grid connected PV is 90% of all PV sales. She reported that in 2008 PV manufacture capacity utilization was 56%, dropping to 42% in 2009. Despite this, more manufacturing capacity is being put in place worsening that situation. Companies are still buying turnkey PV manufacturing solutions which she feels will take years to payback.

Governments can be risky customers

She reiterated that the market is being driven by government incentives, and as governments invest more or back off it has significant impact on supply.
In 2008 Spain was 41% of the demand for PV, and then virtually stopped in 2009. She felt the industry oversold the technology in this case. This year Germany is now making signals that it will lower photovoltaic incentives and will confirm their position next year. This will be a significant blow to suppliers, as Germany has taken 56% of the solar cells made this year. In addition, there has been severe price erosion with quantity volumes of modules averaging $1.85/W, down from around $7/W just 2-3 years ago.
In 2008, she reported that supply of PV was as follows:
ROW 40%
Europe 31%
Japan 22%
US 7%
With demand (users) as follows:
Germany 32%
Spain 41%
Rest Europe 5%
Japan 6%
ROW 8%
US 8%
This makes for a very unhealthy situation, which was realized when Spain suddenly pulled its incentives and that opportunity for PV suppliers collapsed in 2009. With Germany likely to reduce incentives, the next few years could see a decline in revenue for PV, picking up again within a few years.

Commenting on thin film photovoltaic technologies, she says that the boom in these coincided with severe silicon raw material shortage in 2004-2008. However, that situation has now changed with growing silicon feedstock, particularly from China, and low crystalline silicon prices which are making thin film PV a harder sell.
Thin film photovoltaics need to be extremely competitive on price as they are less efficient than silicon. In 2009, they will be about 16-18% of all PV sales.
For more information, Paula Mints will be presenting at the IDTechEx Photovoltaics event alongside Printed Electronics USA on Dec 2-3 in San Jose, USA.

Printed electronics and the PCB industry

Raghu Das, CEO of IDTechEx, presented on how PCB and electronic interconnect companies can get involved in the huge emerging printed electronics industry.
He summarized that printed electronics is mainly creating new markets, and it involves new materials, new equipment and new know-how. One of the biggest drivers for different applications will be flexible electronics - moving away from rigid substrates to depositing electronics on plastic, foils and paper. Many products will be hybrid, such as printed/flexible displays, sensors and other components connected to conventional electronics and this is an opportunity for electronic interconnect companies. There is also the pressing need for products that end users seek from the huge range of printed electronics components now available - a user "pull" approach.
For more information, attend the IDTechEx event Printed Electronics USA - the World's largest event on the topic that explores these issues, focussing on end user needs. See www.IDTechEx.com/SanJose for details.