The future of electric aircraft

It can only fly for 15 minutes but it is a breakthrough all the same. Improved batteries have finally made a manned electric helicopter a reality. It follows rapidly on announcements of all electric fixed wing aircraft from Germany (PC-Aero), France (EADS), Italy (SkySpark), China (Luneec) and the USA (Sonex etc) and an historic 24 hour flight by Solar Impulse powered entirely by the sun. Solar Impulse has the wingspan of an Airbus (over 200 feet) and carries 11,628 solar cells to power four motors.
For a few years, all-electric power assisted gliders and hang gliders have been available. Advantages of electric aircraft include improved maneuverability due to the greater torque from electric motors, increased safety due to decreased chance of mechanical failure, less risk of explosion or fire in the event of a collision, and less noise.
There will be environmental and cost benefits associated with the elimination of consumption of fossil fuels and resultant emissions. As with on-road vehicles, the problem is range - the best range of both being 160- 400 km (about 100-250 miles) in practicable manned configuration.
Some of the fixed wing pure electric aircraft and other electric flying vehicles are now available in kit form. The SkySpark pure electric fixed wing aircraft has reached 155 mph(300 kph) though 100 mph is more typical of such aircraft, and they have flight time of 1 to 3 hours. The SkySpark experiment is based on a two-seat Pioneer Alpi 300 powered by a 75 kW (100.5 horsepower for the nostalgic) electric motor using brushless technology and lithium polymer batteries.

Sikorsky Innovations, the technology development organization of Sikorsky Aircraft, has officially introduced "Project Firefly," an all-electric helicopter technology demonstrator.
Chris Van Buiten, Director of Sikorsky Innovations, says, "Our objectives with Project Firefly are to provide a proof of principle concept to validate the benefits of an electrically powered rotorcraft; to develop the technologies to enable the manned flight of that technology, and to drive future development of improved, state-of-the-art 'green' technologies and practices."
In building the demonstrator, the Innovations team replaced the legacy propulsion system of an S-300CTM helicopter with a high-efficiency, 142 kW (191 horsepower) electric motor and digital controller from U.S. Hybrid, coupled with a lithium ion energy storage system from GAIA.
The two GAIA 135 Ah lithium polymer hold it aloft for 15 minutes. Most other electric aircraft also employ lithium polymer traction batteries of one chemistry or another because of safety and light weight, with no heavy metal casings. GAIA uses lithium iron phosphate and lithium nickel cobalt aluminum in the cathodes of its traction batteries.
Integrated sensors provide real-time aircraft health information to the helicopter pilot through a panel integrated interactive LCD monitor. Eagle Aviation Technologies, LLC, executed the custom airframe modifications and assembly of the demonstrator aircraft.
"Many of the most significant advancements in aviation have been enabled by transformations in propulsion technology. It is exciting to be at the forefront of the exploration of electric propulsion technology for rotorcraft," said Mark Miller, Vice President, Sikorsky Research & Engineering. "Through the electrical conversion, propulsion efficiency of the aircraft has been increased roughly 300 percent from baseline. Electric propulsion also inherently simplifies the complexity of the propulsion system by reducing the quantity of moving parts, increasing reliability while reducing direct operating costs."
"World fuel reserves are continuing to dwindle as demand increases. This inversion of the supply/demand cycle will increase operating costs of all fuel-based vehicles, especially in the aviation industry. Nowhere is this more apparent than in the commercial helicopter market, where the critical role rotorcraft play could be threatened by spiraling fuel costs," said Mark Miller, Vice President, Sikorsky Research & Engineering, in a statement.
Sikorsky all electric helicopter new in 2010 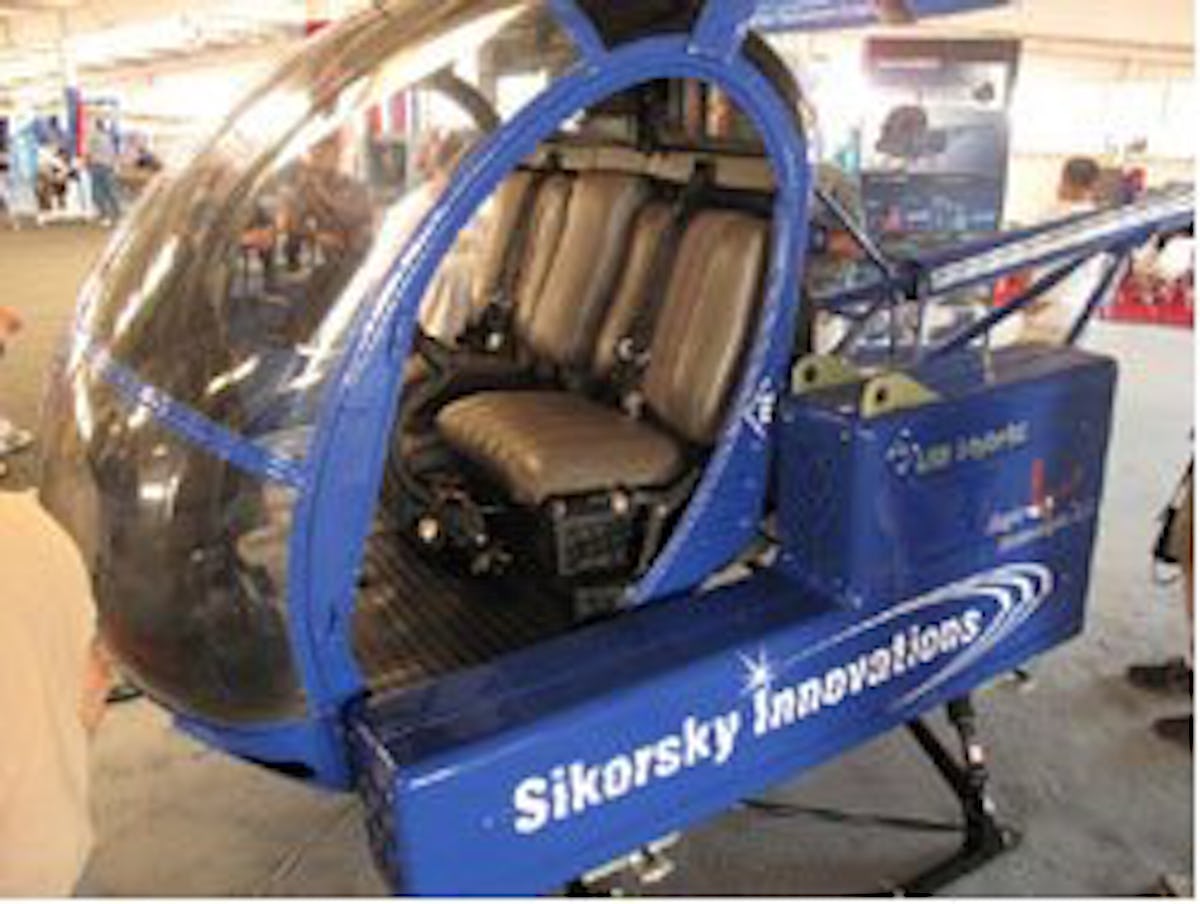 Meanwhile, in Europe, EADS is developing a hybrid helicopter concept that uses two diesel engines driving generators and two lithium-ion battery packs to power electric motors on the main and tail rotors.
EADS showcased this diesel-electric hybrid helicopter concept at the 2010 ILA Berlin Airshow at Berlin-Schönefeld Airport in Germany in mid 2010 and an all electric stunt plane. It argues that fuel consumption and emissions can be considerably reduced by the hybrid propulsion technology.
In July this year, there was a symposium on these "More Electric" aircraft. Prof. Alberto Tenconi of the University of Turin is behind the Italian electric aircraft program and he has his sights on electric feeder aircraft for passenger routes. On the other hand, in the UK, Falx Air Vehicles is planning to push fuel economy further by using a hybrid-electric motor and inbuilt solar arrays in tilt rotor aircraft.
The company expects its upcoming compact single and double-seater tiltrotor aircraft to use only 10 liters of fuel per hour airborne, and the quiet electric operation should see these small, light and maneuverable aircraft also act as good military stealth vehicles. Indeed, BAE Systems makes hybrid electric powertrains for land, sea and air vehicles with considerable cross fertilisation of knowhow.

171 years ago, the fuel cell was invented in the UK, where Intelligent Energy now has its fuel cells powering experimental aircraft. As in on-road vehicles, fuel cells in aircraft are used rather like hybrids, with a sophisticated battery to manage load variations and regenerative charging.
The SkySpark team in Italy now plans to focus on an engine powered by hydrogen fuel cells, something used by AeroVironment in huge fixed wing unmanned surveillance aircraft that cruise the upper atmosphere. The leading aircraft manufacturers Boeing and Airbus, a subsidiary of EADS, are interested in the possibility of large passenger aircraft taking off and landing in almost total silence by using all electric mode, possibly with fuel cells involved.

Certainly, the electrification of aircraft is intimately related to the electrification of land and water vehicles. They use the same or similar batteries, battery management systems and motors. Removing weight is an almost universal objective. However, as NASA has been studying, fundamental redesign is what we really need because today's electric planes are essentially regular planes adapted for electric drive. As such, they are rather like early motor cars that looked like stage coaches. Excitingly, there is now work on using pancake electric motors in the wheeles to get the aircraft up to takeoff speed and to regeneratively brake when it lands. Multiple little motors and propellors have benefits in treducing the needs for strongly load bearing structures and that is the approach with those upper atmosphere unmanned surveillance planes from Aurora Flight Sciences and AeroVironment. Of interest are printed electronics and electrics from companies such as T-Ink, wireless sensors and actuators and energy harvesting as developed by the Center for Energy Harvesting Materials and Systems (CEHMS) at Virginia Tech and photovoltaic energy boosting as analysed by IDTechEx, preferably in transparent form over the whole vehicle. Like the car of the future, the plane of the future will have smart skin, possible including the battery in the laminate for better battery cooling and performance.
Regenerative braking in an aircraft sounds fanciful but recent studies indicate that a regenerative soaring feature is possible, whereby the propeller can be used as a turbine to recharge stored energy when the aircraft encounters an updraft. This is similar to the way the new hybrid electric motor-sailing boats will regenerate next year using their propulsion screws.
An aircraft using regenerative soaring can potentially remain aloft indefinitely at high altitudes where the energy available from vertical atmospheric motion can exceed available solar power by a factor of ten or more. And remember that the pure electric Deepflight submarines of Hawkes Ocean Technologies act as aircraft underwater and have similar opportunities.

It is therefore timely that the world's first event covering all forms of electric vehicle, the IDTechEx Future of Electric Vehicles USA 2010 www.IDTechEx.com/evUSA takes place in San Jose December 6-7.
With an emphasis on future breakthroughs, speakers include pure electric aircraft maker PC-Aero, T-Ink, CEHMS, Hawkes Ocean Technologies and many more best-in-class operations from across the world. There is an exhibition, awards dinner -you are still in time to apply for an award - Masterclasses before and after and visits to local centers of excellence such as Kleenspeed with its Formula One 200mph all electric racing car. AFS Trinity reveals advanced hybrid architecture with fast ultracapacitor storage. Some aircraft employ the third generation lithium sulfur batteries so Oxis Energy presents on those, whereas PolyPlus looks at the lithium air option coming along.
Deliberately, the whole event is designed to be of interest to those progressing electric vehicles by land, water and air. It will cross fertilise new information and reveal the full potential to suppliers. It is the antidote to events that obsess about today's electric cars.
Registration is currently open for Future of Electric Vehicles USA 2010.
Visit www.IDTechEx.com/evUSA for full details. If you are interested in speaking or exhibiting, please contact Teresa Henry t.henry@IDTechEx.com.

I have Built a Prototype which is Much more efficient. See first working prototype on Twitter rotate1953. Soon to be built as a Unit for Small EVs. A Smart car would make a Great cockpit as well as a Power Supply. Taking advantage of all the Features in Todays Auto's. Todays Concept is to (Dyslexsic) to be ever efficient. Sorry Sigorski !! The Auto would unplug and Drive off. Leaving the Unit At the Airfield. Though it lands on a Dime. No tail rotor needed! Thanks