Organic photovoltaics: forecasts for the next decade

Today there are multiple devices available for harnessing solar energy. Each device offers a different set of characteristics. Wafer-based devices consist of mono or polycrystalline and are the most mature technology due to the experience borrowed from the microelectronics industry. They also offer very competitive production costs (<1 $/W) and long lifetimes (25+ years guaranteed but most likely operational into 35+ years). Currently, they hold approximately 80% of the total market share of photovoltaics.
Looking at the non-wafer based portion of the market, IDTechEx estimate that the organic photovoltaics (OPV) market today is $4.6 million and forecast that it will rise to $630 million in 2022. These findings are included in the new IDTechEx report Organic Photovoltaics: Technologies, Markets & Players 2012-2022
As can be seen in the radar graph below organic photovoltaics do not offer very high efficiency levels or lifetime, two issues that can be very limiting handicaps. Instead, OPVs can offer good form factor, high-indoor performance, large-scale manufacture, and low capital expenditure.
A radar chart comparing attributes of different PV technologies. In order to draw the radar chart, module efficiency and lifetime are normalised with respect to 18% and 25 years. 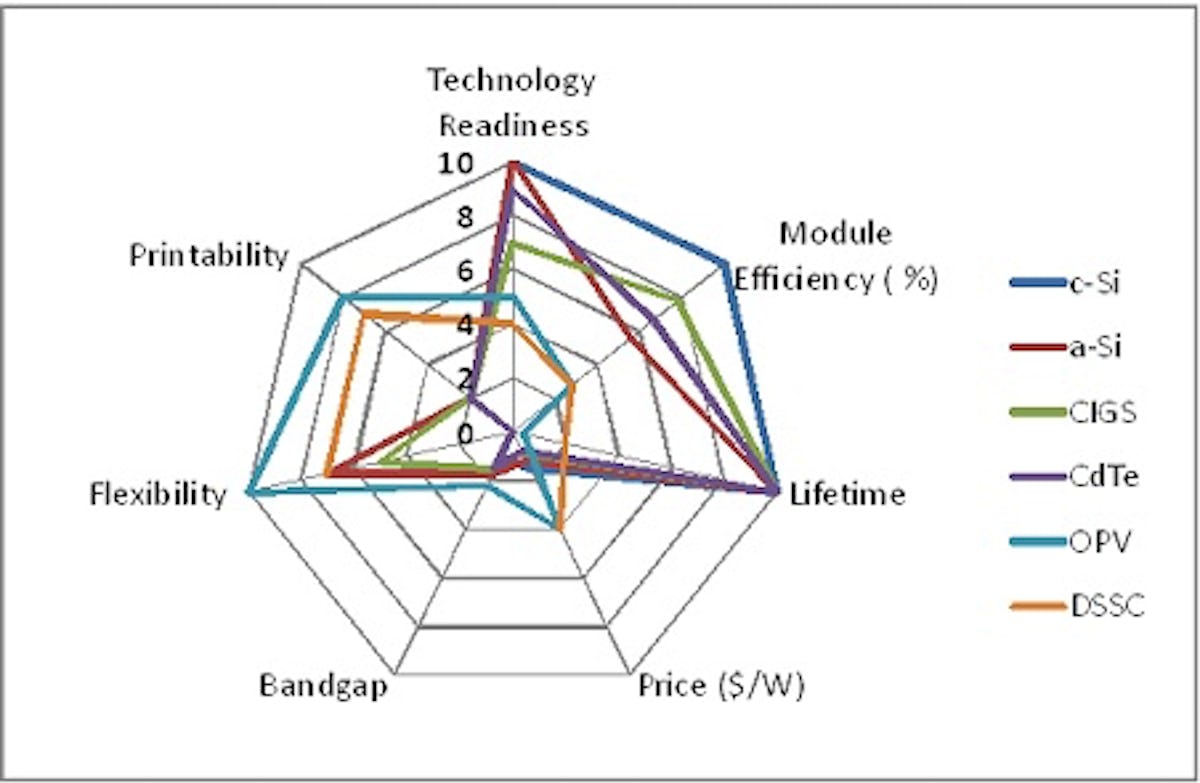 Source: IDTechEx www.IDTechEx.com/OPV
The efficiency and lifetime impediments in organic photovoltaics have been thoroughly studied by IDTechEx, with input from all of the leading developers of the technology. Our analysis suggests that no breakthrough in technology is expected to occur and improvements take place slowly and linearly in time.
This holds true in spite of the fact that a diverse range of active materials can be envisioned and synthesised for use in OPV cells. This suggests that OPVs will struggle to outperform more established technologies of today. This is because, for example, crystalline silicon already offers 16-18% efficiency in production volumes, and lifetime in excess of 25 years.
For those interested in further understanding the challenges for OPVs, IDTechEx has developed technology roadmaps or guidelines, which forecast improvements in module efficiency, lifetime as well as costs over the next decade, which are included in the report. These can provide a practical way to gain insight into how the technology is likely to evolve in the coming years in order to compete with other solar technologies.

The handicap in lifetime and efficiency will force OPV developers to play on other strengths, some of which are summarized in the table below. The comments section highlights the need to be aware that other technologies can also achieve some of the performance characteristics of OPVs and that these characteristics are not necessarily unique to organic technologies.
Selling points of organic photovoltaics

Source: IDTechEx www.IDTechEx.com/OPV
Identification of the most relevant market segments is equally important for OPV companies, in order to be able to make the right type of products available that will allow for initial commercial success that can sustain further growth in coming years. A sample of some of IDTechEx's main findings in some of the market segments addressed by OPV developers (which include consumer electronic, building integrated PV, automotive, outdoor advertising and POP applications among others) can be seen in the table below:
Some target markets of OPV and assessment of the suitability of OPVs for each segment

Source: IDTechEx www.IDTechEx.com/OPV
As mentioned earlier, the market share for organic photovoltaics will rise to $630 million by 2022. The market growth will be predominantly driven by electronics in apparel, posters and PoP smart labels, and off-grid developing world applications. OPVs will nonetheless remain a small player on the greater PV scene, obtaining total market shares of less than 1.5%. After the bankruptcy of Konarka earlier in June 2012, one of the leading companies in OPV development, it is now up to the remaining companies involved in the space, such as Heliatek, Solarmer or Disa Solar to continue the effort towards commercialization. Key for these companies will be to identify the right markets, even if they initially are small, niche segments, in order to transition from investor-funded start-up to a profitable corporation.
For more information on the report, technologies, developers as well as IDTechEx roadmaps and forecasts please visit the website www.IDTechEx.com/OPV or contact the IDTechEx report team at research@IDTechEx.com.
Organic Photovoltaics: Technologies, Markets & Players 2012-2022
For more attend the forthcoming events :
Printed Electronics Asia, Japan, Oct 2-3
Printed Electronics USA, CA, USA Dec 5-6