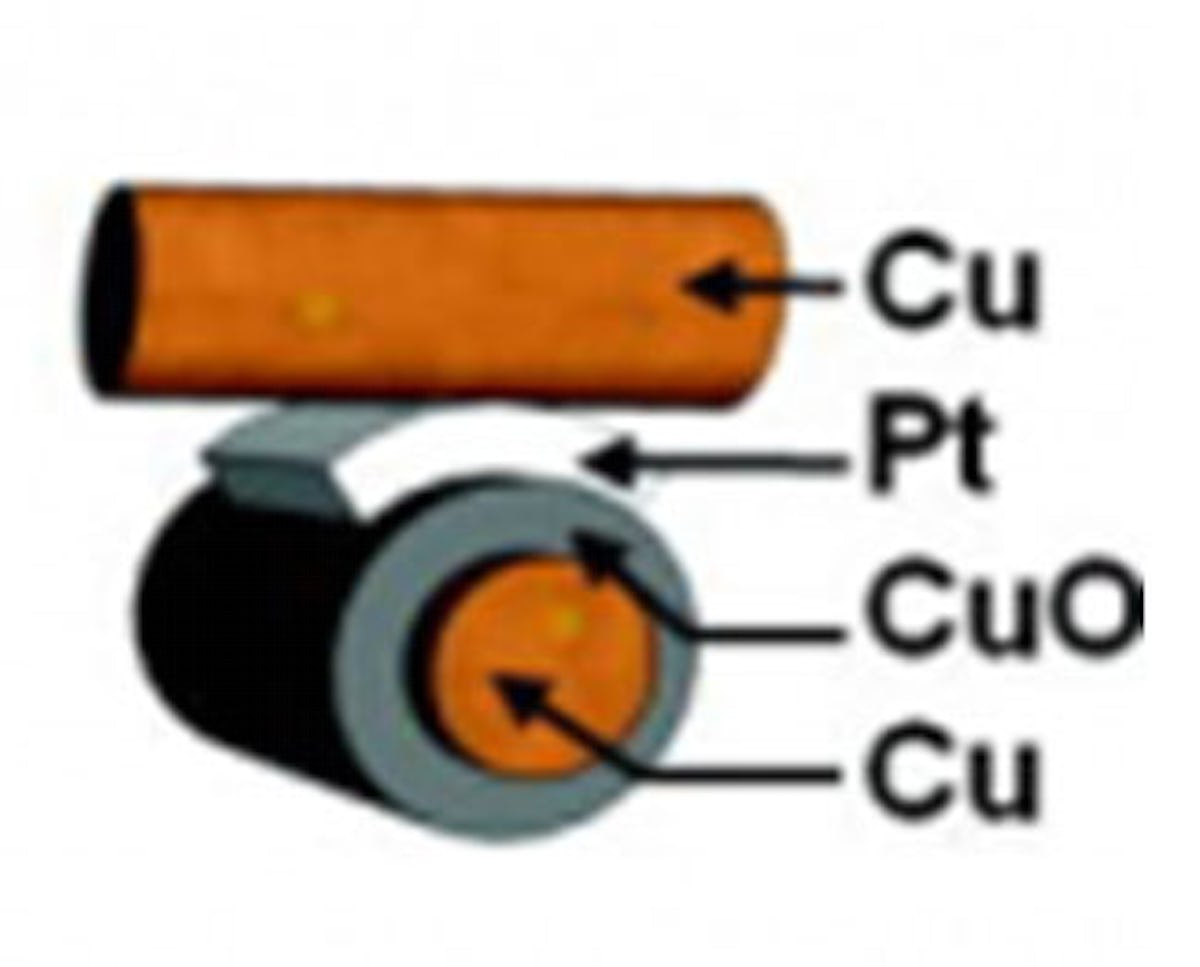 Source: NASA
The seminal early work on printed memristors was carried out by Nadine Gergel Hackett at the National Institutes for Science and Technology in the USA. However, the commercialisation of memristors, the basis of the human brain and the "missing" fourth fundamental passive component, was based on Hewlett Packard making arrays of them on silicon chips and integrated into these transistor circuits. Intel and others have also moved these into the commercial space but not usually by employing printing or even titanium dioxide. 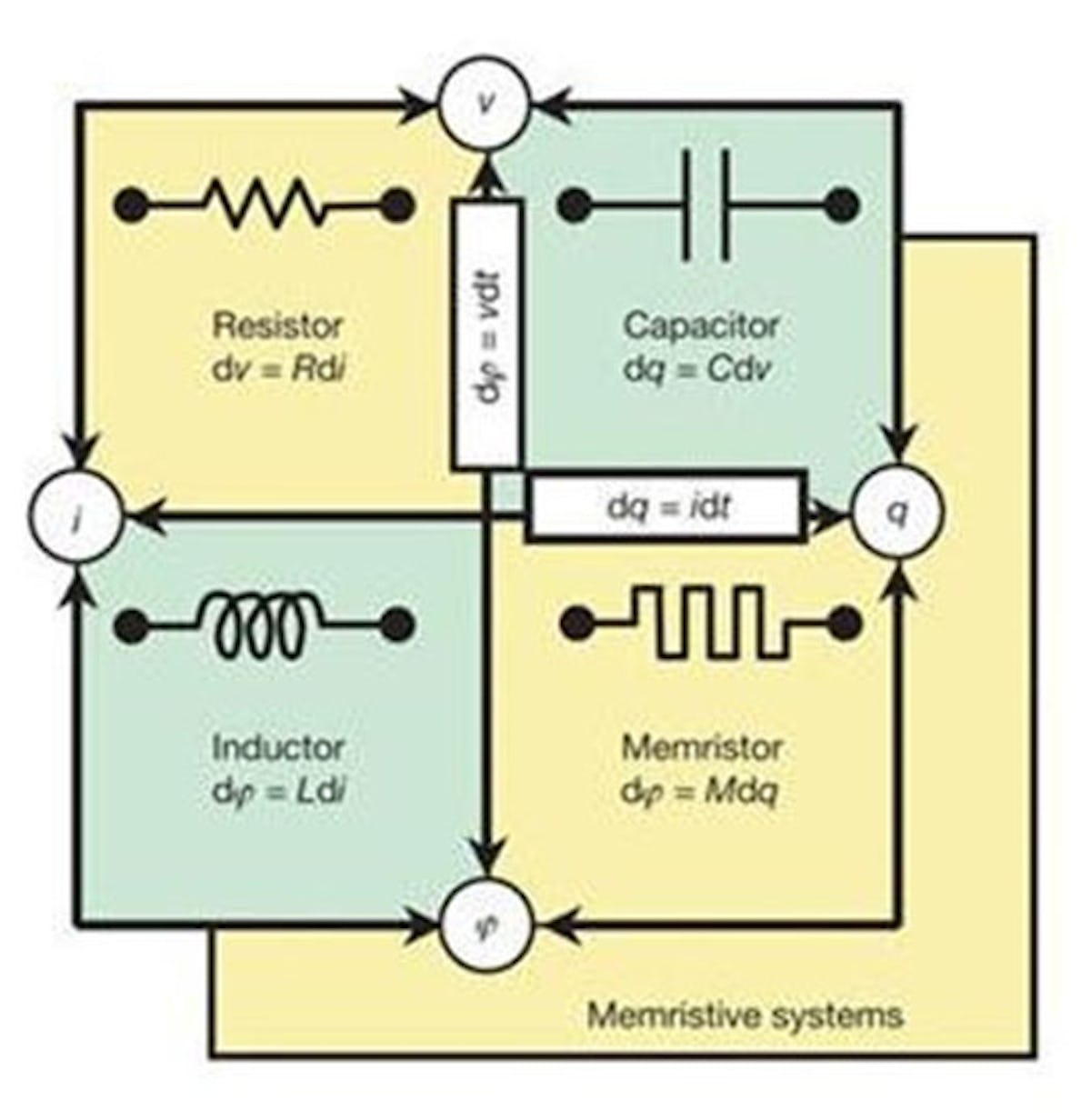 Source: Hewlett Packard
Now we see a return to the larger but thin film, titanium dioxide memristors in the form of fibers, the 12-300 nm layers being variously created by thermal or plasma oxidation, RF sputtering or electrochemical deposition with more conventional printing as a route to value engineering the devices in due course.
Korean researchers recently published a paper describing a single titanium oxide based memristor they have integrated with a single crystal silicon transistor. In addition to future research into improved reading of nonvolatile memory via a diode and unipolar resistor combination, they created and tested a single Transistor/ Memristor cell on plastic substrates. When packing cells with the 1T-1M model, they achieved random memory access without the earlier difficulties of read-path problems encountered with electrical distortion and interference. The flexible transistor works to limit read current from these memristive sneak-paths. The test arrays were constructed of an 8×8 grid of transistor-memristor cells, and they tolerated a 2.8cm long flex to within 1.8cm of each edge, for 100 flex cycles. 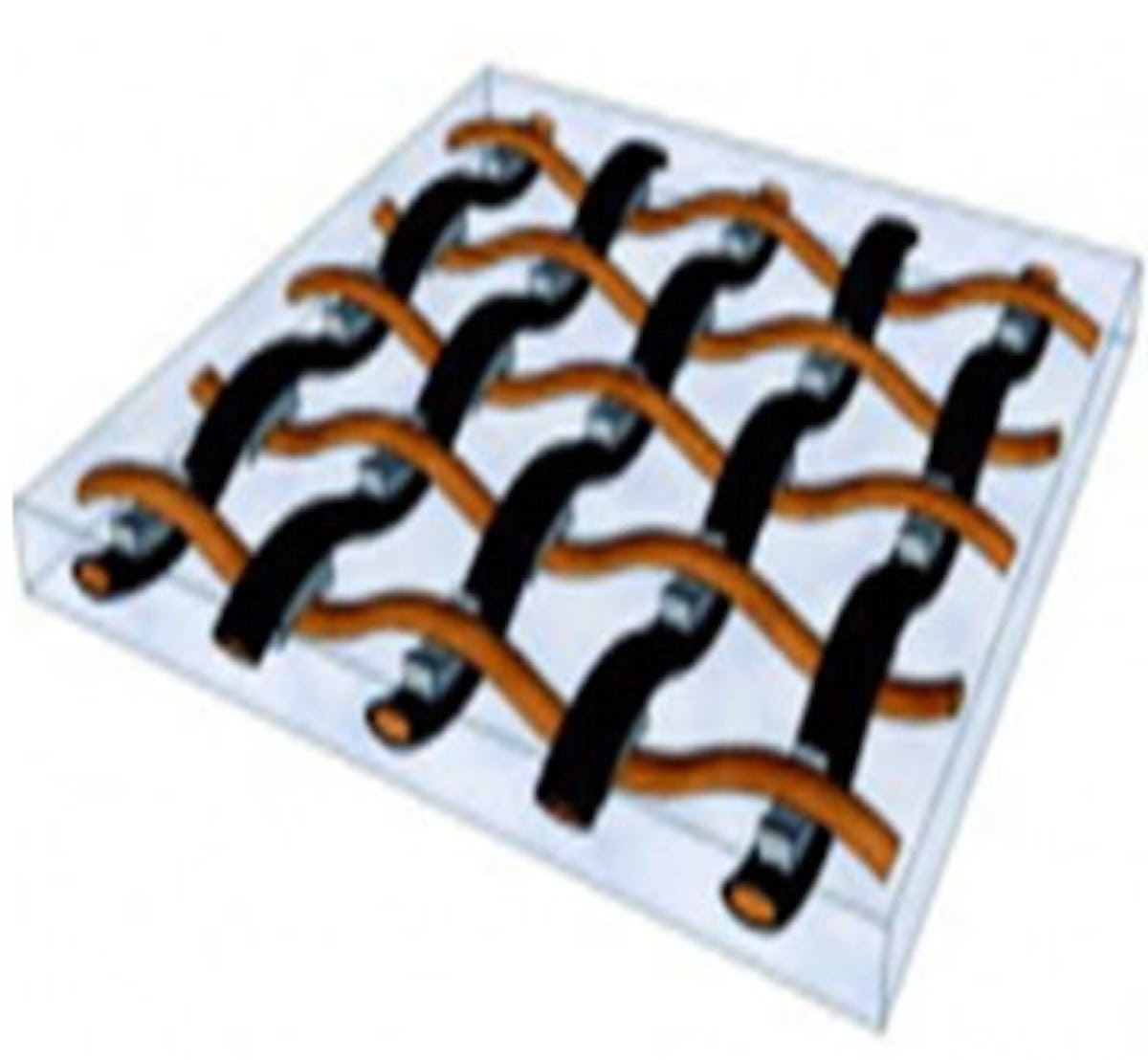 Source: NASA
One of the biggest problems the wearables industry has faced is the problem of power and state. Ultra-low voltage helps but true nonvolatile memory, with the ability to perform simple logic-on-chip, is one of the threshold milestones to achieve.
A recent paper from AIP NASA's Center for Nanotechnology at Ames Research Center on "Copper oxide resistive switching memory for e-textiles" gives a good overview of the state of the field. It says, "Integration of electronics into textiles is an emerging field of research investigating the possibilities of smart fabrics and wearable electronics. The technology commonly referred to as electronic-textile or e-textile aims to promote higher quality of life with built-in elements such as power generator, battery, sensor, computational element, and memory. The power generator embedded in the fabric can charge the battery for powering the sensors, and the sensors can detect biomarkers for various diseases and monitor vital signs of the elderly or individuals in extreme conditions such as soldiers and astronauts, and transmit the information to doctors.
Among the electronic components, transistors, logic circuits and interconnects have been previously demonstrated on fibers. Though a flexible memory has been implemented on plastic substrates, memory elements in a textile form have not yet been reported.
Herein, we demonstrate a preliminary resistive switching memory device on a metallic fiber since memory is a critical component for electronics. Starting from copper wires, a Cu/CuxO/Pt sandwiched structure is fabricated in a crossbar architecture and passivated with polydimethylsiloxane (PDMS) coating.
In recent years, various random access memory (RAM) alternatives to flash memory have been proposed such as phase change memory, magnetic memory, resistive switching memory and ferroelectric memory etc."
"Of these, resistive memories have received much attention due to their simplicity wherein the resistance of an oxide material is distinctively changed between two levels by applying a voltage. A number of transition metal oxides such as ZrOx, TaOx, TiOx, WO, HfOx, and CuxO have been studied for resistive memory applications. A resistive memory structure, comprised of a two-terminal crossbar array, can be easily embedded into the textile because textiles consist of a network of orthogonal fibers and the cross-point contacts are inherently formed at each intersection, resembling the crossbar memory structure. While the dielectric layer is normally an insulator, some transition metal oxides can assume either insulating or conducting state depending on the applied voltage.
Among the oxide candidates, CuxO has been widely investigated because it is non-toxic and copper is relatively abundant on earth. In addition, copper oxide based memories have been reported to show superior retention time and excellent cyclic endurance compared to other candidates. Another motivating factor for this choice is the ease of growing the oxide layer which could otherwise be one of the most expensive processes in the fabrication scheme. Simply heating Cu in atmospheric ambient can produce a thin CuxO film, which establishes one aspect of the feasibility for manufacturing.
Based on these benefits, the Cu based resistive switching memory has been selected here for fabrication in the form of an orthogonal mesh structure suitable for e-textiles. The CuxO is used as the storage medium and the Cu wire, conventionally used for interconnect, simultaneously serves as the fiber and bottom electrode. Current-voltage (I-V) characteristics including set, reset, and read operations are presented and data retention time and cyclic endurance are discussed for long-term reliability."
The conclusions include the following: "We have demonstrated a CuxO resistive switching memory on Cu wire by forming CuxO film through thermal oxidation of the copper wire. The inner core Cu wire was used as the bottom electrode, outer shell CuxO film was used as the storage medium, and Pt was used as the top electrode, thus forming a Cu/CuxO/Pt structure. The electrical switching properties were characterized and the retention and cyclic endurance of the memory device were examined. The cylindrical morphology of the device can play the role of a fiber of the textile, and therefore the memory can potentially serve as the fundamental building block for integration into future e-textile."
For more attend the forthcoming events :
Printed Electronics Asia, Japan, Oct 2-3
Printed Electronics USA, CA, USA Dec 5-6