This article shares some of the research in the newly updated IDTechEx report, "Stretchable Electronics Comes to Market" (www.idtechex.com/stretch). Flexible electronics is typically printed reel to reel and it is typically rollable around a 2.5 centimeter diameter, newer versions in the laboratory being rollable around a human hair.
Figure 1. Ultra-flexible organic circuits 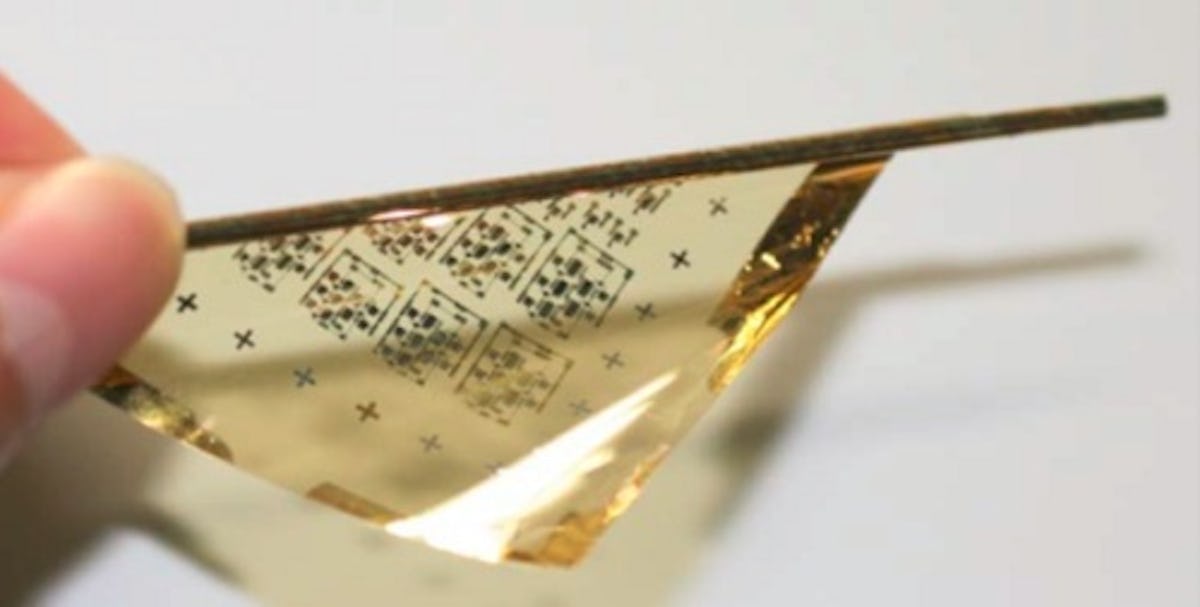 However, this flexible electronics is barely stretchable and its flexibility is usually only in one dimension at a time. In the automotive industry and particularly with electric vehicles for land, water and air, something more is preferable - three dimensional stretchability. It is needed both for producing rigid products by stretching them to form during plastic molding and it is useful in a form that is stretchable in use.

Consider stretchable electronics and electrics needed in order to tolerate plastic molding into structural rigid components for example in cars. These can be up to 40% lighter, smaller and lower cost than previous systems such as overhead lighting and control clusters with rocker switches, spring contacts, filament bulbs and so on. They can be much more reliable because they are fully sealed and have no moving parts. T-Ink and its partners pioneered this with the overhead lighting cluster of the Ford Fusion car in late 2012. Ink patterns capable of up to 500% stretch are employed as electrodes, actuators, antennas, interconnects, heaters and so on in T-Ink's various structural components. Such processes will be particularly valued for electric vehicles, whether on land, water or airborne. Indeed, electric aircraft have a particularly acute need for lightweight smart skin of various types as discussed in the IDTechEx report, "Electric Aircraft 2013-2023" (www.IDTechEx.com/evaircraft).
Figure 2a-d. T-Ink overhead control and lighting cluster in the Ford Fusion car

Mercedes Benz is working on electric/electronic fabrics for use in cars. They may heat, cool, sense presence and perform other functions. Others seek three-dimensional stretchability in the various flexible photovoltaic sheets becoming available for the outside of a vehicle, including electric aircraft now becoming popular. For example, as we knew in times past with stretching of leather onto the roof of a sports car, cutting to shape is less attractive and robust that stretching, gripping and glueing to shape. However, flexible photovoltaic film currently bends in only one direction. That includes flexible copper indium gallium diselenide (CIGS), Dye Sensitised Solar Cells (DSSC - titanium dioxide/ruthenium-based dye/iodine-based electrolyte), amorphous silicon and organic options relying on polythiophene inks.
It is exciting that some university research is creating thin film photovoltaics that harvests infrared, visible and ultraviolet frequencies in one surface, in principle being useful even when wrapped under a vehicle. It is promising that some of the organic and inorganic options are transparent or at least translucent so they could go over the windows and lights of a vehicle, not just the body, thus generating useful extra power. However, the automotive and aircraft industries have pointed out that they really need to be stretchable in three dimensions to be used efficiently in these envisaged applications. See IDTechEx's reports on photovoltaics for further details www.IDTechEx.com/research/pv.
Several flexible and textile electronics concepts for the automotive industry, such as seat heating and seat occupation detection, panel heating, biosignal sensors in the steering wheel etc. have been demonstrated in the last year. However, major automotive brands including Mercedes Benz noted that the automotive industry is still very cost and lifetime driven, currently aiming for a lifetime of 15 years. It is thought that cars will look more and more similar on the outside due to compliance so the car interior will become the place for corporate differentiation in the future. IDTechEx disagrees with this: we see such possibilities as the whole of a premium car glowing in the dark for better safety, thanks to stretchable skin. There is great potential for stretchable electronics and electrics both inside and outside electric vehicles for land, water and air.
For more information, see IDTechEx's full list of EV research reports www.IDTechEx.com/research/ev or attend "Electric Vehicles Land, Sea & Air Europe 2013" www.IDTechEx.com/evEurope.