BASF and Bosch - founding members of the technology initiative of Germany's Federal Ministry of Education and Research (BMBF) - are to cooperate in the innovative field of organic photovoltaics (OPV). At an event held in the Neue Börse, the Frankfurt stock exchange's head office, the German government and its partners from industry pledged to invest in research to promote the new technology, which is aimed at making the manufacture of solar cells much more cost-effective and at the same time increasing the number of areas of application.
Last year, photovoltaic modules had a global market volume of 8 billion euros. The segment is expected to grow by more than 20 percent annually between now and 2020. The BMBF will provide 60 million euros for research to develop this highly attractive market, while the initiative's current industry partners - which include, alongside BASF and Bosch, Merck (Darmstadt) and Schott (Mainz) - plan to spend up to 300 million euros.
"The initiative to promote organic photovoltaics is an example of how we combine our strengths to invest in new technologies. Our high-tech strategy is aimed at strengthening Germany's role as a business location", said Dr. Annette Schavan, Federal Minister for Research, at the launch of the new initiative.
Organic photovoltaics is the term used to describe solar cells based on organic semi-conductive materials that can generate electricity from light. This means that in the future they could replace the silicon that is used today. The aim is to use new materials, production processes and installation technologies to make the organic solar cells more efficient and cost effective in the long term. The new technology will thus pave the way for sustainable energy production and make solar power more competitive. 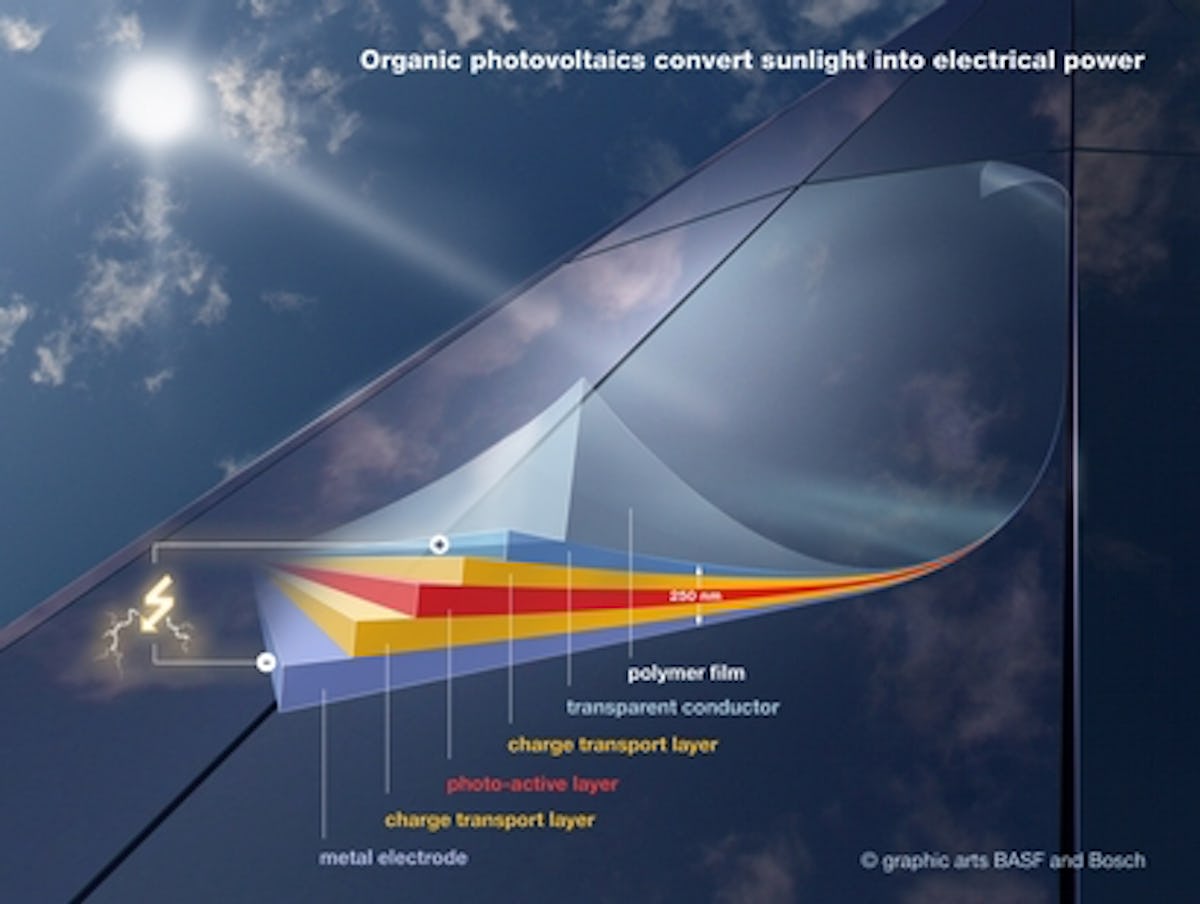 Organic photovoltaics convert sunlight into electrical power
Source: BASF
Organic solar cells are flexible and as thin as a clear plastic folder. They are both light and color tunable, which enables them, for example, to be used in foldable cell phone chargers, for example, or on car roofs. From 2015 onwards, their main area of application is expected to be in the construction industry, where the cells will be used in the form of a thin layer of plastic on roofs, windows or facades.
Stake in Heliatek
To further develop the new technology, BASF and Bosch are also cooperating in special research activities with the Dresden-based company Heliatek GmbH. BASF Venture Capital GmbH and Robert Bosch GmbH are each investing 1.6 million euros in the start-up company, which was founded in 2006. The other investors are Wellington Partners and the German government fund for high-tech start-ups. Heliatek specializes in the manufacture of new-generation organic solar cells. The company is working on an ultra-efficient technology to build large-scale modules on cheap, flexible substrates using a roll-to-roll production process.
BASF is conducting research into semi-conductive organic materials with high thermal and photo-thermal stability. The aim is that these materials should perform the function performed by silicon today; in other words, absorbing sunlight and converting it into electric power. The materials stand at the beginning of a system innovation, and the materials chosen will determine key properties of the end product. BASF is contributing its broad-based expertise in the field of organic electronics and the design, synthesis and production of complex organic compounds to the project. "BASF is working in close interdisciplinary collaboration with Bosch - and at an early stage. This will allow us to jointly create the conditions needed to develop the product more swiftly and to gain a competitive advantage globally", said Dr. Stefan Marcinowski, member of the Board of Executive Directors and Executive Research Director at BASF. "Organic photovoltaics will be a strategic focus of our growth clusters Energy Management and Nanotechnology".
Moving towards energy self-sufficient homes
As part of the newly launched initiative, the Bosch Group will be looking at issues relating to industrial production. "We want to use organic photovoltaics to make solar energy available at an affordable price", explained Siegfried Dais, deputy chairman of the Bosch board of management, with responsibility for research and advance engineering. This can only be done through efficient mass production and Bosch will be developing the appropriate processes. "At the same time we want to use this opportunity to get closer to our vision of an energy self-sufficient home". Bosch has made considerable progress here: the company has already successfully launched a number of different technologies for producing renewable energies, including solar collectors for generating hot water, large gear units for wind farms, heat pumps as well as vegetable oil and wood pellet based burners.
The researchers want to develop organic solar cells that convert at least ten percent of the incident light into energy and offer a service life of more than ten years. BASF's "Joint Innovation Lab - Organic Electronics", which was opened last year in Ludwigshafen, acts as a cooperation platform for the industry and university partners. Experts from a range of disciplines are also working on organic light emitting diodes (OLEDs) at the JIL, a technology also based, like organic photovoltaics, on organic semi-conductive materials. Other layers may or may not be organic.
For more information read the report Printed Photovoltaics and Batteries. Also attend Printed Electronics Asia 2007 or Printed Electronics USA 2007
Source top image: BASF - Organic solar cells for car roofs and mobile phones